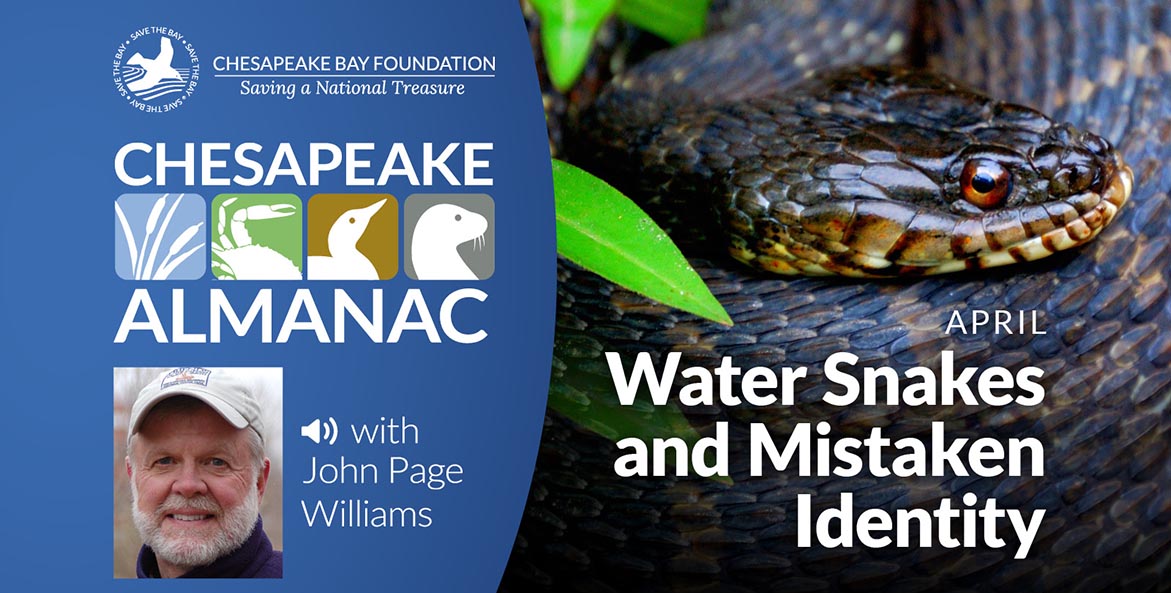 This is John Page Williams with another reading from my Chesapeake Almanac. This entry is from April and it's entitled, "Water Snakes and Mistaken Identity."

My daughter Kelly and I were sneaking along a trail in the Patuxent River Park on a raw, damp April day, trying to get a good look at a raft of ducks resting in the wild rice marshes of Jug Bay. Suddenly Kelly shrieked and jumped what seemed like 6 feet sideways. She had stepped on something she thought was a tree root, and it had moved under her foot. Considering that she was only six years old at the time, her reaction was understandable. To her credit, she went right back to look at the "root." It was a water snake caught in an embarrassing situation.

The two previous days had been warm. As best we could guess, the snake had come out of its winter burrow and begun moving around, at least enough to find a sunny spot where it could bask to get its body temperature up. But a low pressure system had swept into the area, bringing rain and cooler temperatures. The snake's metabolism had slowed down again, catching it out in the open. It could react only with a sluggish heave of its body to the insult of being stepped on. We gently moved it out of the path and left it to rouse at its own pace.

April sluggishness is a fact of life for a cold-blooded animal, but it is not otherwise a characteristic of the active, curious, and occasionally feisty water snake. By far the most common snake along the Chesapeake's rivers and marshes, the water snake belongs to a large group of nonvenomous snakes, the family Colubridae, which also includes the very common terrestrial black, king, and garter snakes.

In general, the water snake grows to a length of 3-1/2 feet, with a narrow head and wide, dark-brown bands on its back. These bands are interspersed by lighter brown, and they taper to narrow markings on the sides. Bellies are white to yellow.

There are, however, some 10 subspecies of water snake in North America, so markings can vary a great deal. Some water snakes in the Chesapeake region are almost uniformly brown.

The striped individuals are sometimes mistaken for copperheads. However, the copperheads have the reverse color pattern: tan hourglass markings across the back, interspersed by narrow dark-brown bands. Their heads are broader and flatter than the water snakes' and are generally brightly colored, "like a new penny," as the saying goes. The bodies are much stockier.

Copperheads occur around the Bay and its rivers, but they are not common, and they are much more docile than water snakes. One is tempted to believe that, with their venom, they need not be as aggressive as water snakes, either in catching prey or in defending themselves. They should, of course, be treated with great caution, and any bite from one should receive immediate medical attention.

Water snakes are sometimes mistaken for another species of venomous snake as well. Some years ago, I spent several summers running a water ski boat for Camp Whitehall on the Mattaponi River at Walkerton, about 30 miles upriver from its confluence with the York at West Point. One day, a snake swam across the river toward the boat. Apparently it felt that it had the right of way, for it opened its mouth wide, showing a lot of pinkish-white skin, and lunged at the hull. The two boys skiing behind held on for dear life as the snake dove under them. They made sure to tell their cabinmates that night that they had been attacked by a cottonmouth moccasin.

It was a good story, and similar ones are told every summer all over the Bay, but the cottonmouth is a southern species. The south bank of the James is the northern limit of its range, and the snakes seldom stray far north of the Great Dismal Swamp and Back Bay. We can take some comfort in that fact, because cottonmouths can be aggressive, and their venom is strong.

Water snakes should not be trifled with either. For that matter, if cornered, caught, and handled sloppily, they will bite. The bite, though not venomous, can lead to serious infection. They also give off a nasty odor to repel captors. The best policy for an inexperienced snake handler is to admire the animal for the interesting creature it is and let it go its own way.

Any species that can successfully spread over most of North America and diversify into so many subspecies has found a favorable niche. Water snakes can swim very well, both on the surface and underwater. Their aquatic diet attests to their swimming ability. They eat a wide variety of food, primarily fish and frogs, but also crayfish and aquatic insects. As is true for other snakes, their jaws and throats can stretch to accommodate large prey. Reputedly, they are able to swallow young catfish and digest them, even if the sharp spines pierce the walls of their stomachs and intestines.

Water snakes spend a significant part of their days on riverbank tree branches absorbing the sun's warmth, but they do not spend much of their time on land (except when caught there by cold weather). They bear their young live, in the water, a trait shared with other aquatic snakes.

Kelly is still not much of a snake handler, but she has turned into a good snake watcher. She has learned to appreciate these animals as active and graceful members of the Bay community.