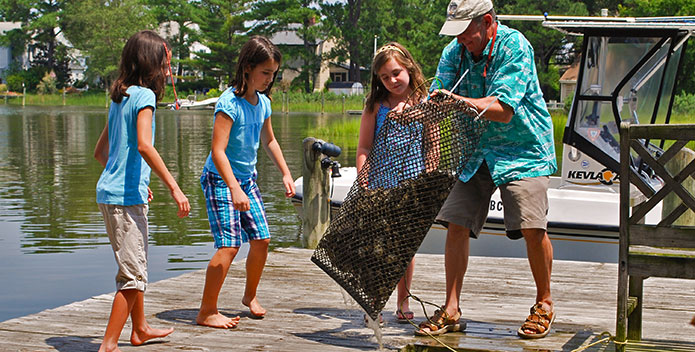 A CBF oyster gardener gets some help from three young assistants.

Breaking previous records for the program, Chesapeake Bay Foundation (CBF) volunteer oyster gardeners in Virginia this year raised and returned nearly 104,000 adult oysters to plant on sanctuary reefs. That is nearly three times the 39,000 oysters returned in 2018. The number of volunteers participating in CBF’s Virginia program increased to 645 in 2019 compared to 415 in 2018.

The record-breaking numbers occurred because more oyster gardeners have joined the program in recent years, the oysters they grew often thrived, and more gardeners returned their oysters at the end of the season.

“We’re seeing more and more interest in oyster gardening as people get excited about the Chesapeake Oyster Alliance goal of adding 10 billion new oysters in the Bay,” said Peyton Mowery, CBF’s Virginia Oyster Restoration Outreach Coordinator. “Oyster gardening is a really fun way that anyone can help bring back oysters and create reefs that provide habitat for fish, crabs, and other critters."

CBF’s oyster gardening program in Virginia started in 1997. Volunteers grow oysters in wire cages off a dock either at home or at one of 26 official public locations. Over the course of a year, these volunteer gardeners raise oysters from tiny babies to full-grown adult oysters. The gardeners grow oysters in waterways from the Northern Neck to Hampton Roads to the Eastern Shore, where these oysters filter local water, create mini reefs that provide habitat, and eventually spawn and increase the local oyster population.

After one year, gardeners return their oysters to CBF for planting on sanctuary reefs in Bay tributaries. Anyone near tidal water can participate, even if they don’t have waterfront property. The 11 new public locations added this year include many marinas that give anyone the option to take part. The growth in public locations is another key to allowing more gardeners to participate.