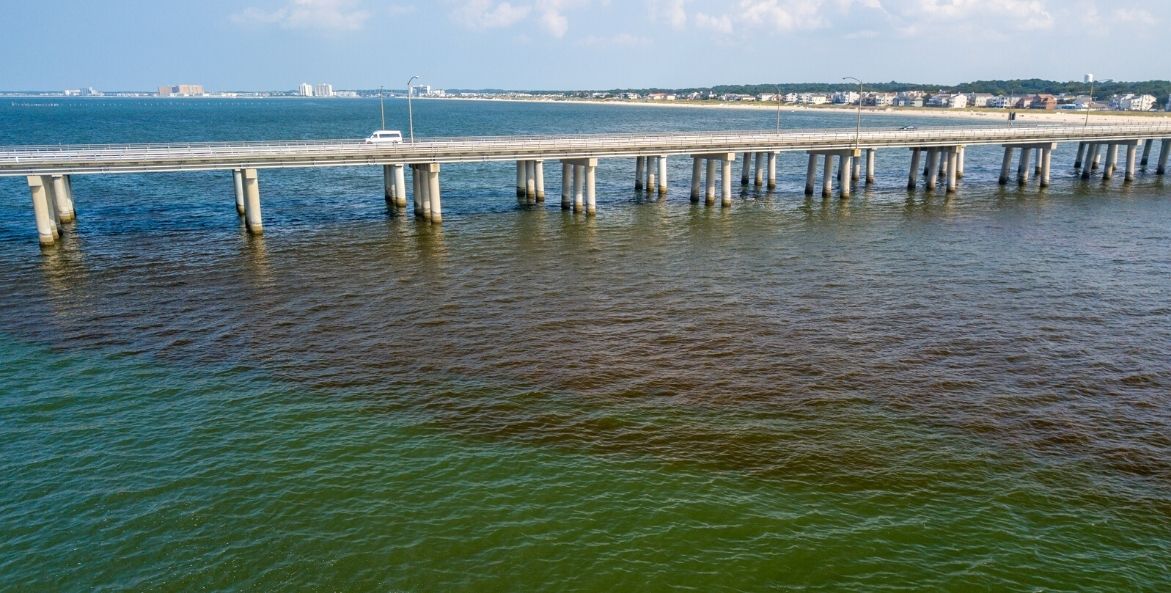 A proliferation of harmful algal blooms this week across Hampton Roads is clear in striking aerial photos and videos captured by the Chesapeake Bay Foundation (CBF) and American Multimedia Solutions near the Chesapeake Bay Bridge Tunnel on Aug. 26. The algae colored the water reddish-brown in many places, including Ocean View in Norfolk, Chic’s Beach in Virginia Beach, and the Lafayette and York rivers.

“The harmful algae blooms in Virginia this summer keep people from enjoying the water on a hot day and can harm our valuable fish and shellfish populations. They’re also an unfortunate reminder that we still have a lot of work to do to ensure clean, healthy waterways,” said CBF Senior Scientist Chris Moore. “The solution is clear. We must increase state and federal investment in programs that reduce pollution from agriculture, stormwater, and wastewater.  Virginia can also take an important step forward by setting water quality standards linked to reducing harmful algal blooms.”

Unfortunately, most summers in Hampton Roads includes reports of harmful algae, which are fueled by nitrogen and phosphorus pollution. When the algae die and break down, they create oxygen-depleted dead zones in the water where fish, crabs, oysters, and other aquatic life cannot survive.  In some cases, the algae themselves can be toxic to oysters and other wildlife.

These algal blooms can threaten the health of people, pets, fish, and shellfish. Beachgoers should stay out of the water if they notice discolored or murky water that may have an unusual smell, according to the Virginia Department of Health.

Rainy weather the last two weeks washed more polluted runoff into waterways, and the hot, still weather this week set up prime conditions for the blooms. Similar conditions are likely to continue through the weekend. Harmful algal blooms this summer have also led to health advisories for parts of Lake Anna and an advisory that shut down a 50-mile stretch of the Shenandoah River’s North Fork to recreation.

Jim Deppe, a Virginia Beach resident and frequent swimmer, encountered the algal blooms while swimming in Hampton Roads this week.

"As an open water swimmer, swimming through algae blooms reduces visibility to near zero and is no fun,” Deppe said. “So, these 'mahogany tides' adversely impact swimmers as well as aquatic grasses, oysters, crabs, and fish.”