Today, the Chesapeake Bay Foundation (CBF) released its 2022 State of the Blueprint report to assess whether Bay restoration efforts are on track to meet the 2025 deadline. The report finds that the answer collectively is ‘no.’ We looked at progress in Maryland, Pennsylvania, and Virginia, which together account for roughly 90 percent of the Bay's pollution.

Since the Chesapeake Clean Water Blueprint was established in 2010, states have put practices in place to achieve an estimated 42 percent of the nitrogen-pollution reductions and 64 percent of the phosphorus reductions that the Blueprint requires. Much of this progress is due to reducing pollution from wastewater treatment plants. In fact, wastewater treatment upgrades are the key reason Maryland and Virginia, individually, may still meet their 2025 pollution-reduction commitments.

But as the chart demonstrates, there is still a long way to go. 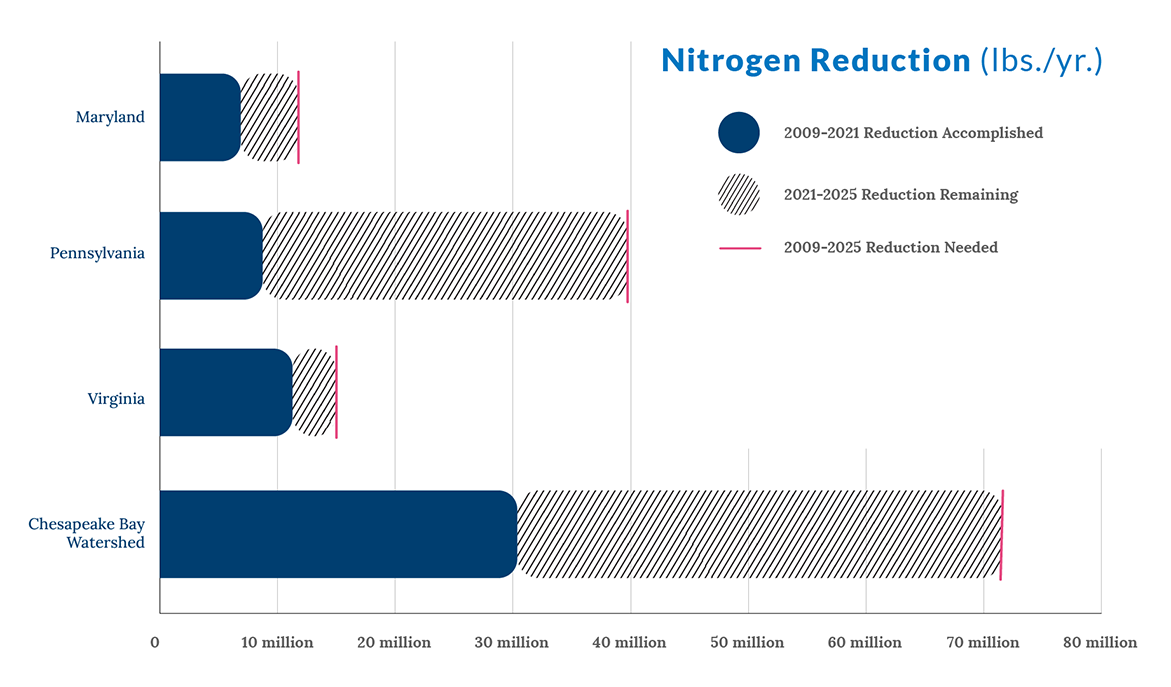 The Chesapeake Bay Executive Council (EC), which leads Bay restoration efforts, will be meeting next week and they should take action to continue Chesapeake Bay restoration progress. Critical leadership is needed and requires the EC to acknowledge that the states are not on track to meet the 2025 commitments, recommit to the partnership and the Bay restoration goals, and commit to developing a new plan with a specific timeline and accountability to permanently protect the Bay.

“While the Bay states collectively are not on track to meet the Blueprint’s 2025 implementation deadline, the partnership must build on lessons learned, achieve the Blueprint commitments as quickly as possible, and maintain the limits long-term,” said CBF President Hilary Harp Falk, “The watershed cannot afford delay given the urgent challenges of climate change and a growing population. The states must demonstrate the leadership necessary to complete the job and EPA must hold all accountable for any failures. By recommitting to the Blueprint principles of partnership, science, and accountability, we can still leave a healthy, resilient watershed for the next generation.”

That 2025 is a deadline, not a finish line was envisioned in the 2014 Chesapeake Watershed Agreement. Reaching the goal and addressing these new sources is the defining challenge the partnership now faces.

The Big Picture—Getting Restoration Back on Track

Reducing pollution remains the single most urgent priority to restore the Chesapeake Bay, and the Blueprint has proven to be the best way yet to do so. Since 2009, the partnership has put practices in place to reduce the nitrogen pollution flowing into the Bay each year by 30 million pounds—roughly 42 percent of the required reduction. But reducing pollution from agriculture and stormwater runoff is significantly behind.

Addressing these sources is the defining challenge the partnership now faces, and key policy changes are necessary to fix issues that have long hampered success. These include:

We used the Chesapeake Bay Program's scientific model to estimate pollution reductions made between 2009 and 2021 and whether those reductions are on a trajectory to approach the 2025 commitments. Maryland's pollution-reduction progress is summarized in the table below. 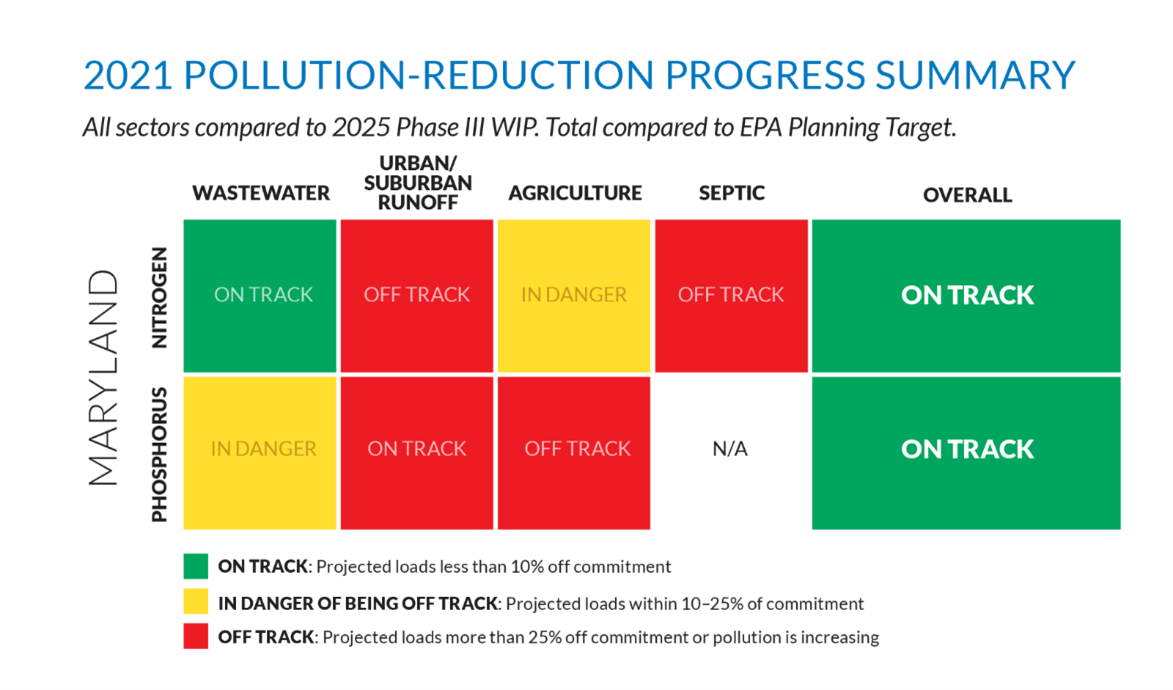 “Breakdowns at Maryland’s largest wastewater treatment plants led to millions of pounds of excess nitrogen and phosphorus pollutants reaching the Bay from Maryland in the previous year and triggered public health warnings. Meanwhile, the state is depending on pollution reductions from these plants to offset pollution from other sources and meet Blueprint goals,” said CBF Maryland Executive Director Josh Kurtz. “We’re continuing to urge state leaders and the Maryland Department of the Environment to be more proactive inspecting facilities and enforcing regulations related to direct pollution sources such as wastewater plants and factories to prevent such failures in the future.”

Maryland must maintain the reductions from direct pollution sources while leaders focus on work to reduce urban and agricultural runoff—now the two largest sources of Bay pollution in Maryland.

“We recommend the state tighten its permit standards for city and county stormwater systems to reduce runoff from developed areas. Stronger protections for trees and forested land are also needed to prevent increasing stormwater runoff. In Maryland’s agricultural areas, efforts must be accelerated to help farmers practice regenerative agriculture—a more natural way to farm that uses methods such as cover crops, rotational grazing of livestock, and vegetated buffers between fields to reduce fertilizer, pesticide, and sediment pollution from farm fields.” Kurtz added.

Wastewater—Upgrades to wastewater treatment plants have achieved about half of the total pollution reductions Maryland needs to meet its 2025 commitments. Recent operational failures at the two largest treatment plants in the state underscore the importance of consistent funding, inspections, and maintenance to sustain progress.

Maryland and its local jurisdictions have upgraded 64 of the state’s 67 largest plants and a collection of smaller facilities. A law passed by the General Assembly in 2022 strengthened standards for inspection and enforcement.

Agriculture—Maryland has substantially strengthened cost-share assistance for farmers to implement conservation practices that create natural filters, like tree plantings, on their land. The state is also expanding the personnel dedicated to helping farmers access these dollars.

While support for natural filters on farms has increased, the state’s implementation goals for these practices remain unacceptably low. Maryland should work to increase enrollment in the federal Conservation Reserve Enhancement Program (CREP), where participation is currently far below the target. Deploying tools and incentives to target the most effective practices in the most effective locations could also accelerate restoration progress.

We used the Chesapeake Bay Program's scientific model to estimate pollution reductions made between 2009 and 2021 and whether those reductions are on a trajectory to approach the 2025 commitments. Virginia's pollution-reduction progress is summarized in the table below. 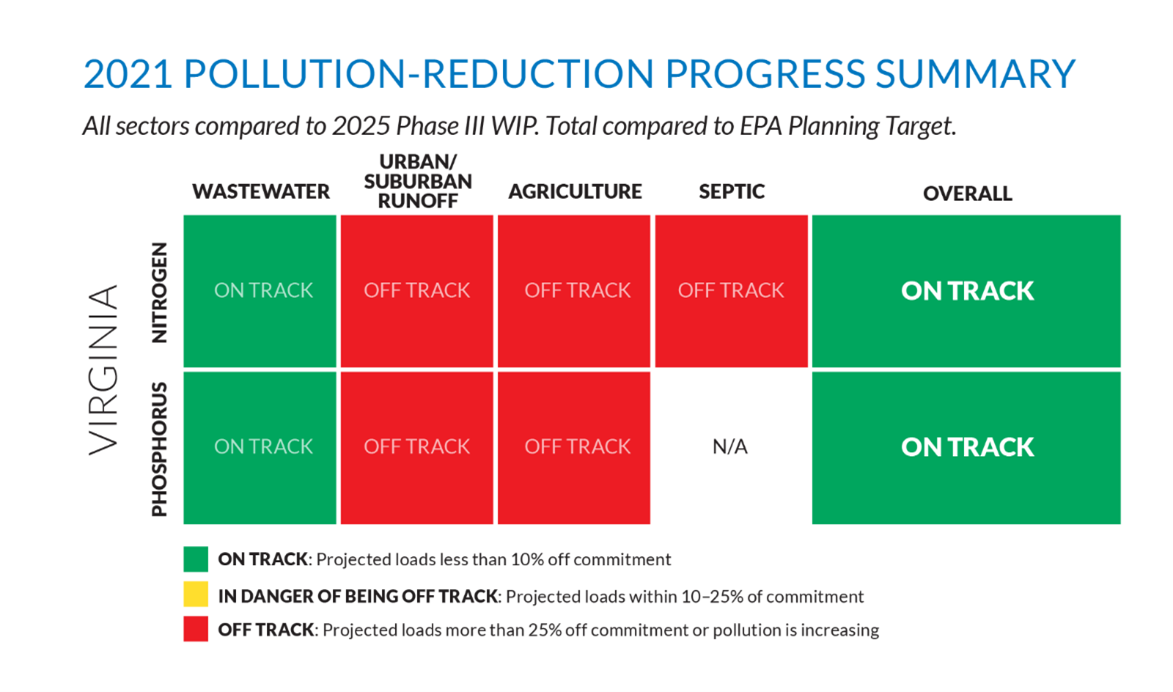 Virginia remains on track to achieve its 2025 pollution-reduction commitments, largely due to wastewater treatment plants, which account for over 90 percent of its nitrogen and phosphorus reductions since the Blueprint’s establishment.

“While Virginia has made meaningful progress, the vast majority of pollution cut so far has come from wastewater plants. That approach is not sustainable. About 90 percent of Virginia’s remaining pollution reductions must come from agriculture, and population growth and climate change are leading to more polluted runoff from developed areas,” said CBF Virginia Executive Director Peggy Sanner.

To meet its 2025 commitments, Virginia must rapidly accelerate pollution reductions from these sources.  Recent increased investments are a promising step, but these funding levels must be maintained and targeted to the most beneficial pollution-reduction practices, such as planting streamside forest buffers.

“Thankfully, legislators recently accelerated investments in programs that reduce pollution from stormwater, agriculture, and wastewater. Maintaining strong state support for these programs, while targeting funds to the most effective practices, is the only way to ensure healthy rivers and streams in the future,”Sanner added.

Urban/Suburban Polluted Runoff—Recent investments in the Stormwater Local Assistance Fund (SLAF), a program that helps municipalities pay for practices that reduce polluted runoff, have had an important impact. However, increasing pollution from developed areas continues to offset reductions in other sectors.  Failure to reissue stormwater pollution-reduction permits is a critical factor preventing progress.

Virginia is behind schedule for reissuing MS4 permits, which it committed to do in its very first plan to meet the Blueprint commitments (Phase I WIP, 2010). This delay resulted in several permits being “administratively continued”—in other words extended beyond their expiration date with no updates requiring additional pollution reductions. The Commonwealth must reissue the remaining MS4 Permits, continue investments in SLAF to help municipalities reduce polluted runoff, and strengthen stormwater regulations to accelerate pollution reductions.

Agriculture—Agriculture represents nearly 90 percent of the remaining pollution reductions Virginia must make to meet its Blueprint commitments.  The state is currently not on track and must accelerate progress to reduce pollution from farms to sustain water quality long-term. Recent, unprecedented investments in the Commonwealth’s Agricultural Cost-Share Program are a major, positive step.  For the first time, the funding will approach the annual level of expected need—a notable accomplishment. These funds need to be focused on the most cost-effective efforts by targeting locations and conservation practices that will yield the greatest benefits for water quality long-term, such as planting forested buffers along streams.

We used the Chesapeake Bay Program's scientific model to estimate pollution reductions made between 2009 and 2021 and whether those reductions are on a trajectory to approach the 2025 commitments. Pennsylvania's pollution-reduction progress is summarized in the table below. 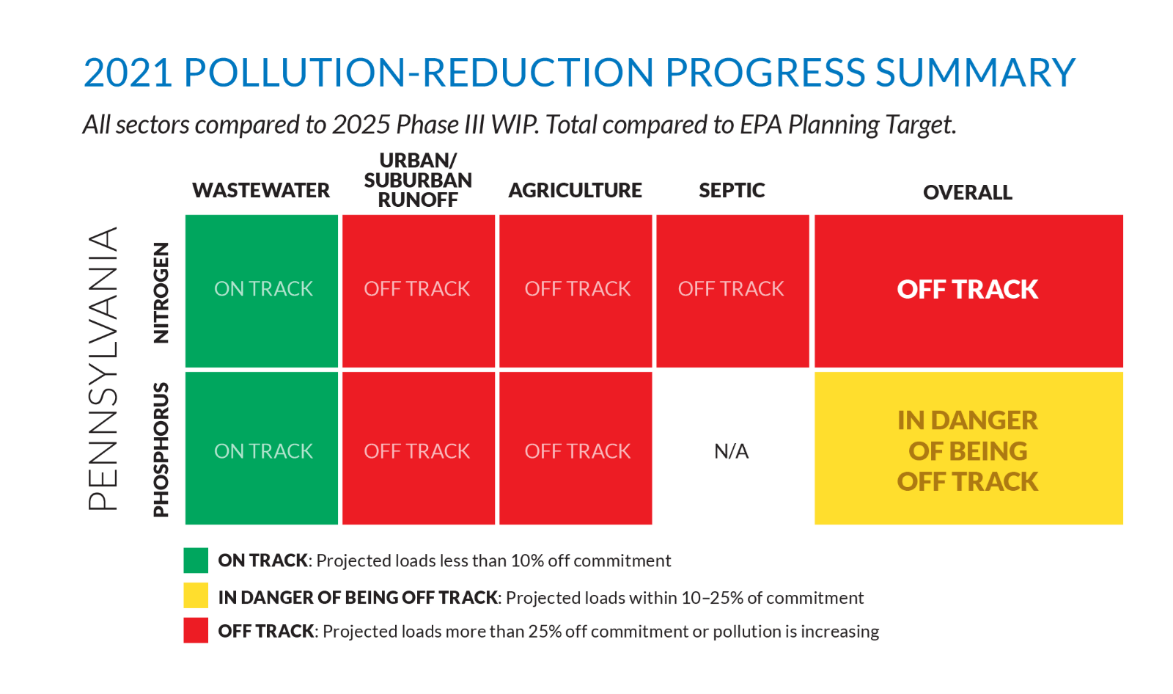 Pennsylvania is not on track to meet its 2025 pollution-reduction commitments including the creation of an adequate plan that achieves those commitments.

However, the Commonwealth has momentum. The $220 million Clean Streams Fund (CSF) in this year’s budget, which includes the new Agricultural Conservation Assistance Program, is an unprecedented and critical down payment on clean water efforts. Moreover, counties across the Bay watershed have developed action plans to reduce pollution, creating a strong sense of optimism and commitment from local officials, landowners, and others.

Nonetheless, there is an enormous amount of work to do. These programs and plans need significant, sustained funding to succeed and vastly accelerate pollution reductions.

Wastewater—Pennsylvania is meeting its 2025 Blueprint wastewater commitments ahead of schedule through more efficient treatment plant technologies and purchasing credits to reduce nitrogen and phosphorus pollution. Combined-sewer overflows challenge many older communities, but they represent less than 2 percent of Pennsylvania’s nitrogen pollution from the wastewater sector.

Urban/Suburban Polluted Runoff—The conversion of fields and forests to development—coupled with the greater frequency and severity of storms due to climate change—is increasing polluted runoff from new and existing urban and suburban areas.

Municipalities must increase efforts to reduce polluted runoff from streets, buildings, and other hard surfaces. They should also consider forming partnerships, such as a regional stormwater joint venture, to reduce costs and maximize benefits through collaborative projects. Additionally, the state must update the guidance manual for designing and implementing practices that reduce polluted runoff, which was last substantially updated 16 years ago.

To date, Pennsylvania has achieved approximately 13 percent of its 2025 commitment for forest buffers. Increased funding and technical assistance are required to accelerate the creation of the remaining 82,000 acres of new forest buffers, maintain existing buffers, and verify their location and condition.

The recently created Agricultural Conservation Assistance Program will provide $154 million in technical and financial assistance to help farms across Pennsylvania adopt conservation practices that will improve soil health. This reduces erosion, nutrient and pesticide loss, and polluted runoff. However, this funding is finite and falls short of what is needed. Pennsylvania is also off-track meeting commitments for practices such as managed grazing.

“Creation of the Clean Streams Fund and Agricultural Conservation Assistance Program are historic down payments for the great amount of work that remains for getting Pennsylvania back on track toward its goals of reducing pollution to local rivers and streams, and the Bay.

“If agriculture is to achieve 90 percent of the remaining nitrogen-pollution reductions it will take sustained investments of financial and technical resources at historic levels. Meeting Pennsylvania’s Blueprint is a big lift for agriculture, and farmers have demonstrated that they appreciate the value of healthy soils and clean water. But they cannot do it by themselves. Supporting conservation implementation is critical to the health, economic wellbeing, and quality of life of all Pennsylvanians.

“Also, CBF is especially proud of progress made by the Keystone 10 Million Trees Partnership, which will plant its 5 millionth tree this month, a milestone toward the Commonwealth’s mammoth goal for forest buffers. The national, regional, state, and local agencies, conservation organizations, watershed groups, businesses, and individuals that make up the partnership are determined to finish the job.”