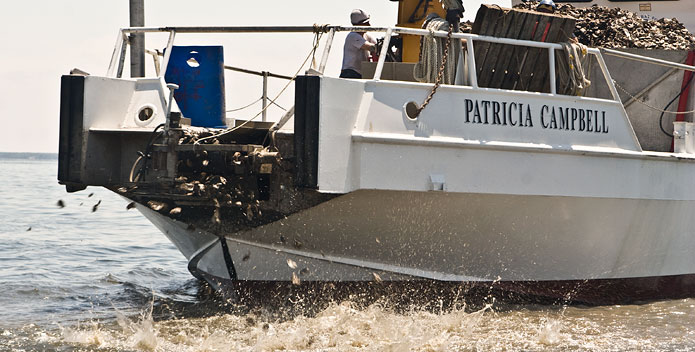 CBF Trustee and oyster advocate Keith Campbell funded construction of Patricia Campbell and named it for his wife, Patricia. The vessel's design combines features from Virginia oyster farmers' boats with state-of-the-art technology to create the most advanced oyster restoration vessel on the Bay. The boat performs multiple functions essential to oyster restoration to help jumpstart the Bay's decimated oyster population. 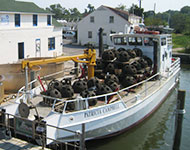 CBF often works with partner organizations to design, build, and stock sanctuary oyster reefs. Patricia Campbell brings to collaborative projects the capability to deposit as much as 40 tons of oyster shell or spread up to several million seed oysters per load. Its most valuable features are the built-in conveyor and spreader that allow the crew to evenly spread seed oysters from the bow with pinpoint accuracy. The on-deck crane also gives her the capability to place alternative reef materials, such as concrete reef balls, on the bottom.

Patricia Campbell's draft enables it to work in shallow water. The specially designed spuds, a type of anchor, allow the boat to hold its position exactly or spin on a dime, making placement of valuable young oysters onto reefs much more precise. Patricia Campbell brings valuable innovation to oyster restoration to improve the Bay's water quality, help restore fisheries, and save the Bay.