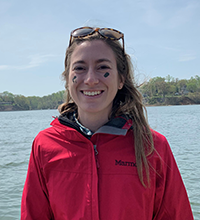 Codi Yeager lives in Annapolis and serves as CBF's Senior Writer. She grew up in northern Michigan on the shores of Lake Michigan and believes most good things in life happen near the water.

After earning a degree in journalism and biology at West Virginia University, she nearly became a botanist. But she decided she liked writing about science (and talking with cool science people) even better than studying it. Her subsequent work as an environmental reporter took her all over the country, from the Alaskan Arctic to the prairies of North Dakota to the Mojave Desert.

Outside of work, she's happy to do any activity that involves strapping on hiking boots and affords plenty of opportunities to take pictures of plants.