The Most Important Fish in the Bay

Atlantic menhaden, Brevoortia tyrannus, are small, nutrient-packed fish that are central to the Chesapeake Bay's food chain and support one of the largest commercial fisheries on the Atlantic coast. As a result of their environmental and economic importance, management of the menhaden fishery is a political flashpoint across the region.

Why are menhaden (also called bunker or pogy) important in the Chesapeake Bay?

Menhaden have been called the "most important fish in the sea." In the Bay, they create a vital connection between the bottom and top of the food chain. They eat tiny plants and animals, called plankton, by filtering them from the water. In turn, menhaden are a rich food source for many predator fish—including rockfish (striped bass), bluefish, and weakfish—as well as ospreys, bald eagles, dolphins, and whales. (See our video, Why Whales Follow Menhaden into the Bay.)

Rockfish, in particular, historically relied on menhaden for a large portion of their diet. Researchers have raised concerns that a lack of menhaden could make rockfish more vulnerable to disease.

Why should I care about menhaden?

If you enjoy feeling the tug of a big rockfish on the end of your line (and savoring the taste of it at dinner) or watching osprey snatch a silvery fish from the water, you have menhaden to thank! These small fish are the unsung heroes of the Chesapeake Bay, providing a rich food source for many of our favorite critters.

What are the threats facing menhaden?

The Bay is one of the most important nurseries for menhaden, helping to sustain the population along the Atlantic coast. Menhaden eggs hatch in the open ocean before drifting on currents into the Bay, where juvenile fish live and grow for their first year of life. But long-running scientific surveys show the number of young menhaden in the Chesapeake Bay dropped dramatically in the early 1990s and remains low. 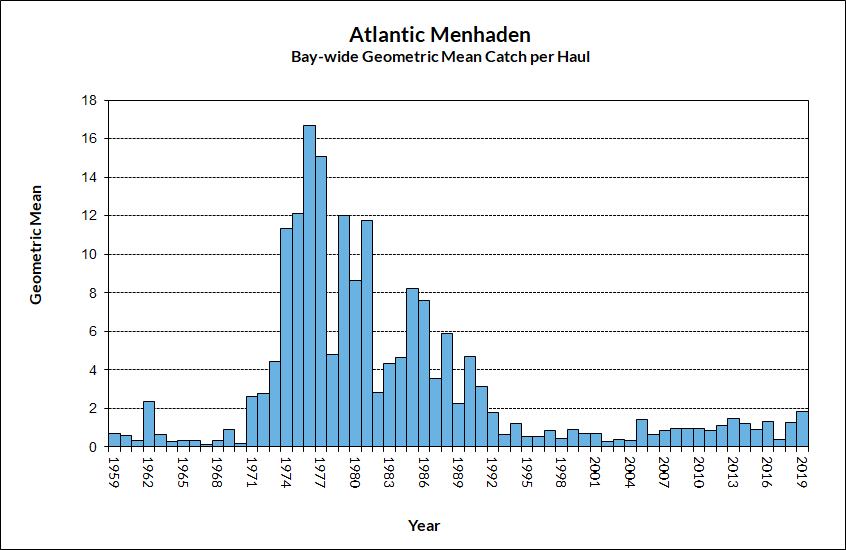 This graph represents the average number of juvenile menhaden available (“abundance”), which has a direct impact for predators like striped bass and osprey. Unfortunately, the number of young menhaden produced in the Bay each year has been poor for the last 20 years.

At the same time, almost three-quarters of all menhaden caught on the East Coast are harvested by the Omega Protein Corporation—a Canadian-owned company that fishes largely in or near the mouth of the Bay. Omega operates the sole remaining menhaden reduction facility on the U.S. East Coast in Reedville, Virginia. The plant reduces (cooks and grinds up) the fish for a variety of uses, such as nutritional supplements, food additives, and feed for livestock and fish farms.

Why is there a harvest cap for menhaden in the Bay?

Menhaden migrate along the Atlantic coast from Florida to Maine. An interstate governing body—the Atlantic States Marine Fisheries Commission (ASMFC)—manages the fishery for the 15 states that share the coastline. The Commission establishes limits for both the coastwide harvest as well as the Chesapeake Bay harvest.

Over the past two decades, fishery managers have raised concerns that the concentration of fishing effort in Bay waters could disrupt the Bay's food chain, harming populations of rockfish and other predator species. As a precaution, the ASMFC first set a cap for Omega's industrial menhaden harvest in the Bay in 2006. In 2017, the ASMFC voted to update the cap to reflect more recent menhaden harvest levels in the Bay.

In blatant disregard for the fishery management process, Omega knowingly exceeded the cap in 2019. The violation resulted in a unanimous ASMFC vote referring Virginia to the U.S. Department of Commerce for noncompliance with interstate fishery rules. The Secretary of Commerce decided to uphold the ASMFC decision. The new harvest cap approved by the VMRC in April 2020 lowers the amount of menhaden that can be caught in the Chesapeake Bay to 51,000 metric tons per year. Due to Omega Protein’s excess harvest during the 2019 fishing season, the level for 2020 was further lowered to 36,192 metric tons. The VMRC’s action avoids a shutdown of the menhaden fishery due to noncompliance with the ASMFC.

Setting the first harvest quota since the groundbreaking establishment of ecological reference points in August 2020 (see below), the ASMFC in October 2020 voted to cut the coastwide menhaden harvest by 10 percent for the 2021 and 2022 fishing seasons. This lower harvest limit takes into account the new ecological impact of menhaden as well as the traditional impact of the fishing industry. The lower harvest limit aims to leave enough menhaden in the water to help them fulfill their key role in the food chain both along the Atlantic Coast and in the Bay.

How can better management protect menhaden and the Bay?

For more than 25 years, CBF has worked with partners toward a healthy menhaden population in the Chesapeake Bay to ensure that this nutrient-packed fish can fulfill its key role in the food chain. In 2012, ASMFC's Benchmark Stock Assessment showed the total menhaden population was at its lowest level on record. Peer-reviewed population estimates showed menhaden have been overfished for 32 of the past 54 years. A strong fisheries management plan was needed to rebuild the population, and once rebuilt, to maintain it. (See A Timeline of Menhaden Conservation.)

For decades, management decisions and catch limits relied on "single species" stock assessments, independent of other species. In other words, they accounted for demand from the fishing industry, but did not account for demand from rockfish, osprey, and other animals that rely on menhaden for food. This did not necessarily mean there would be sufficient stock to sustain the larger ecosystem needs.

That changed in August 2020, when the ASMFC adopted benchmarks, known as ecological reference points, that will allow managers to account for menhaden's role in the food chain and set catch limits accordingly. CBF has been a strong proponent of this process and will continue to advocate for an ecosystem-based approach to menhaden management.