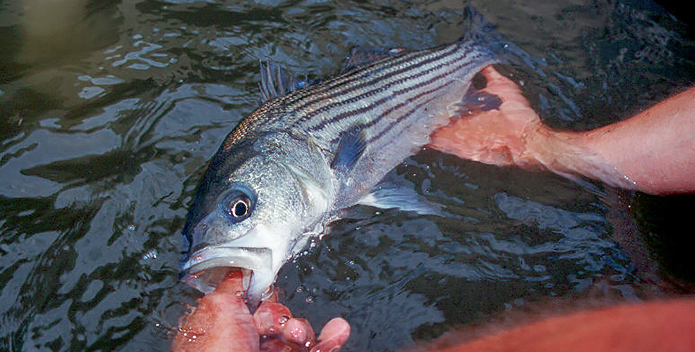 What are Striped Bass (a.k.a. rockfish)?

Striped bass, more commonly called ‘rockfish’ or ‘stripers,’ are perhaps the most iconic fish in the Chesapeake Bay region.  Distinguished by the dark horizontal stripes on their silver bodies, rockfish can live up to 30 years and reach over five feet in length. They migrate up and down the East Coast, but most are born in the Chesapeake Bay and its tributaries and play an important role as a top predator in the Bay ecosystem. They are prized by recreational anglers and commercial fishermen alike.

Why Are Rockfish Important in the Chesapeake Bay?

Rockfish are a crucial part of the Chesapeake Bay ecosystem. Their local name comes from their habit of hiding among oyster reefs and rocks, where they feed on smaller fish, such as bay anchovies or menhaden and crustaceans like juvenile crabs and shrimp. They are also a big economic driver in Chesapeake Bay communities, where they are the focus of popular fishing tournaments, recreational fishing charters, and commercial fisheries.

What Is the Current State of Rockfish Populations in the Chesapeake Bay?

The most recent data from the Atlantic States Marine Fisheries Commission (ASMFC), the interstate cooperative that manages rockfish, 2022 stock assessment found that the striped bass population along the Atlantic Coast is no longer experiencing overfishing, but numbers remain below the management threshold, indicating further rebuilding of the population is required. If fishing rates remain low, there is a nearly 80 percent chance the striped bass population could reach healthy levels by 2029.

Why Are Rockfish Populations Struggling?

Rockfish are often seen as a great fisheries management success story in the Chesapeake Bay. Populations plummeted in the 1970s and early 1980s due primarily to overfishing. But by 2004, they had rebounded to historic levels thanks to intensive conservation efforts that included restocking programs, a harvest moratorium in Maryland and Virginia, and rigorous interstate management plans that have continue to include specified seasons and size restrictions. Concerns about additional declines in recent years led to numerous changes to the striped bass fishery management plan, known as Amendment 7, in May 2022.

Among the challenges facing rockfish populations, are

What Can Be Done to Help Rockfish in the Chesapeake Bay?

Bold action continues to be needed by fishery managers in order to rebuild the population.

Besides the 2022 changes to the fishery management plan, the ASMFC has taken action on two other fronts in recent years. In 2020, it began efforts to reduce overfishing by requiring states to adopt new regulations that would result in an 18 percent reduction in rockfish removals. Maryland and Virginia both adopted regulations that seek to meet this required reduction which include closing and/or shortening certain fishing seasons, increasing the minimum size of fish harvested, and reducing the number of fish anglers can keep.

Second, the ASMFC took action to ensure more menhaden, one of rockfish’s top prey species, are available to support a recovering population.

While these measures are important, it is up to Maryland and Virginia to implement management actions that effectively limit rockfish mortality and improve their habitat, thereby providing the best conditions to get rockfish populations back on the right track.

What is CBF Doing to Help Rockfish?

CBF has advocated for years for science-based fishery management that takes the functioning of the Bay ecosystem into account. In 2020, after decades of work by CBF and partners, the ASMFC took an important step to help rockfish by increasing protections for one of their primary food sources: Atlantic menhaden.

ASMFC adopted what are known as ecological reference points to help determine how many menhaden can be harvested while still leaving enough food for rockfish and other fish and wildlife. Ecological reference points use scientific models to reflect how changes in the menhaden population affect populations of the fish that eat it—allowing fishery managers to quantitatively say how many menhaden are needed to feed and sustain our desired populations of those predator species.

This important action will not recover the rockfish population on its own, but it will help ensure the rockfish in the Bay have enough to eat. Other critical work includes:

Five Ways YOU Can Help Rockfish Recover in the Chesapeake Bay

There are many ways you can help us restore rockfish populations and improve water quality in the Bay.

Disappearing at an Alarming Rate

Seventy percent of an adult rockfish's diet historically has been filled by menhaden. Today that's down to eight percent. What is causing the menhaden population to plummet and what can we do about it?