This Month on the Bay: The Bay's Bare Bones Are Exposed in January 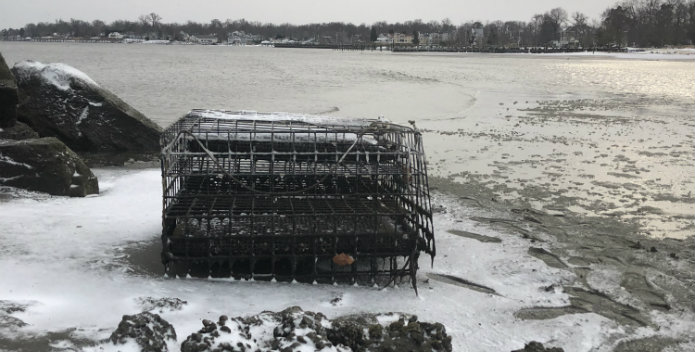 Extreme low tides reveal the bare bones of the Chesapeake.

It's cold out there, and bleak. The water is clear in most of the Bay and its rivers. The Chesapeake's cold-blooded creatures are dormant, or nearly so, and most of us humans dial back our on-the-water activity this month. But there's a lot to see, think about, and learn out there, even in something as simple as bundling up and taking a walk.

For starters, the bleakness exposes things we don't see in warmer times. Case in point: deciduous tree branches. Now is the time to contemplate how they function as natural solar farms when leafed out. Want to stretch your brain? Think about how each individual tree grows its branch structures and leaf shapes to take maximum advantage of the sunlight reaching it throughout the days of its growing season, say April through October in Chesapeake country. Think about how that tree shapes its canopy in response to the landforms, other trees, and buildings around it, in a profound natural process of optimization.

Compare the geometric complexity of that one tree to the large-scale solar farms and roof arrays (like the ones on CBF's Merrill and Brock Centers) cropping up around us, with their uniform layouts and columns. Human-produced solar arrays are advancing rapidly in effectiveness, but we are still way behind the capability of any given maple tree. Start looking carefully at trees on your winter walks, and you'll gain new appreciation for how valuable they are to the Chesapeake ecosystem.

On the Bay in winter the water volume actually shrinks a little bit, since it is densest as a liquid at 40 Celsius (39.20 Fahrenheit). Add that effect to the pull of the new moon (January 16 this year) and the blue moon (January 31), plus the powerful down-Bay push of strong Arctic cold fronts with northwest winds, and we'll see the lowest tides of the year, exposing everything from old steamboat wharf pilings up the rivers to sand bars around Bayside creek mouths. It's fascinating to see how winds and tidal currents shape those bars.

The low tides make some warm-blooded winter foragers happy: shallow water makes it easy for tundra swans to tip up and reach soft clam beds that are too deep for them on normal tides. Diving ducks like canvasbacks can save precious energy because they don't have to go down as deep for the underwater grasses they love. Raccoons happily gouge out craters in creekside sand-mud bottoms, digging for brackish water clams. Their tracks reveal the story.

We're fortunate to have many urban, suburban, and rural trails that require no more equipment than sensible boots, a parka, gloves, a hat, and maybe a pair of binoculars. Take frequent walks this winter, and watch. You'll be surprised at how much you learn about the Chesapeake when its bare bones are showing.

What We Have to Lose