This Week in the Watershed: A United Front 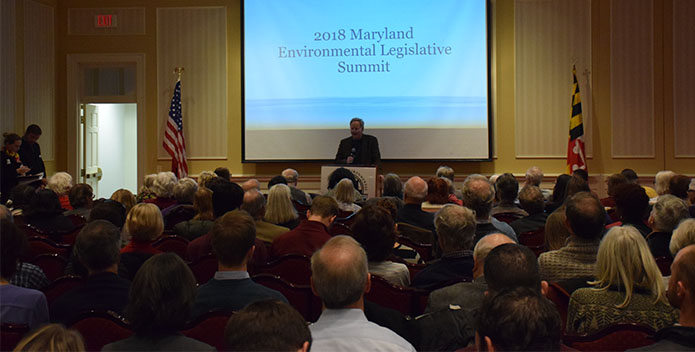 CBF President Will Baker addresses a standing-room only crowd at the 2018 Maryland Environmental Summit.

In our current polarized and fractured political sphere, it is extremely rare for a clear majority to agree on anything. But across the Chesapeake Bay watershed, a diverse coalition is finding common ground on one topic—clean water.

In Virginia, a poll by the Wason Center for Public Policy and the Virginia Environmental Endowment found that 98 percent of Virginia voters agree that pollution in local rivers, streams, and lakes is an important issue. Yesterday, business leaders, elected representatives, and citizens gathered for the Maryland Environmental Summit. Addressing the standing-room only crowd, CBF President Will Baker acknowledged the remarkable unity among the group while saying, "In our lifetimes, yes we will say: the Bay has been saved!" And in the Keystone State, Pennsylvanians are united to restore the nearly 19,000 miles of the state's impaired rivers and streams.

The unity on clean water sets the perfect foundation as the legislative sessions in Virginia and Maryland gain steam and Pennsylvania enters the second year of its two-year session Monday. Stay tuned on how you can join us and millions of others in the fight for clean water!

This Week in the Watershed: Salty Roads, Collaborating States, and Brain Damage