In Case Anyone Is Asking: Warmer Temperatures Hurt the Bay 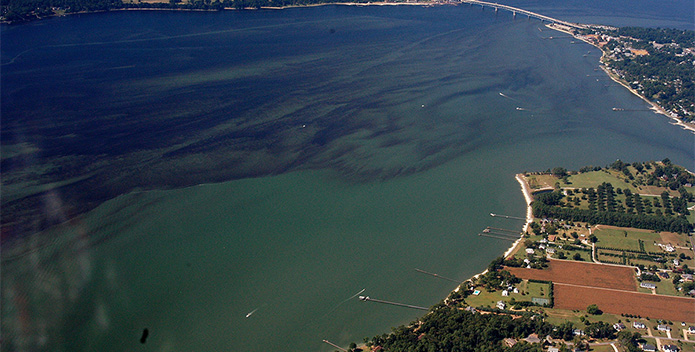 This is fundamental to the science behind saving the Bay.

In a February interview on KSNV-TV in Las Vegas, Scott Pruitt, the Environmental Protection Agency administrator, questioned whether a warming climate might actually be a good thing. "We know that humans have flourished during times of warming trends. So, I think there's assumptions made that because the climate is warming that that's necessarily a bad thing. Do we really know what the ideal temperature should be during the year 2100, or the year 2018?" he asked.

Here in the Chesapeake Bay, there is overwhelming documentation of the damage that climate change will wreak on this national treasure. And it's not just about the future. The inconvenient truth is that we're already witnessing the damaging effects of climate change.

Based on long-term records from the piers at the Chesapeake's two historic marine laboratories — extending back to 1938 at the Chesapeake Biological Laboratory on Solomon's Island, MD, and to 1948 at the Virginia Institute of Marine Science at Gloucester Point— the Bay is getting warmer.

Warmer water has less capacity to hold dissolved oxygen, and dissolved oxygen is critical for life in the Bay, its rivers and streams. Higher temperatures exacerbate the Chesapeake's dead zones, expanding both the size and the duration of oxygen-deprived areas in the Bay.

Scientific models agree that storms will become more intense in the future. Storm intensity and increased rainfall will adversely affect the Bay's ecological health. Increased scouring and runoff from more intense rain events, regardless of the season, carries significantly more nitrogen, phosphorus and sediment pollution to local rivers, streams and eventually, the Bay.

Increases in water temperature can also affect the distribution and health of aquatic species in the Chesapeake. For instance, species that are already stressed by high summer temperatures, such as the eelgrass that provides important fish and crab habitats in the Lower Bay, may be greatly reduced or eliminated. Goodbye grasses. Goodbye crabs. Simply put, grasses equal crabs.

Warming waters caused by climate change also impact species distribution and range along the mid-Atlantic coast. Species at the southern end of their range, like soft-shell clams, are already retreating northward up the Atlantic Coast toward colder waters.

Atlantic menhaden, a critical forage fish in the Bay food web, haven't produced strong year classes in the Bay in 20 years, possibly the result of climate-related shifts in ocean currents interrupting their life cycles. This lack of strong reproduction is affecting the rockfish population as they shift toward eating blue crabs as a primary food source, which has negative nutritional consequences for the rockfish and obvious negative consequences for crabs.

And those same crabs may be facing new predators such as red drum, which have expanded their range northward into the Chesapeake.

There is no serious debate over the impact of climate change on the Bay. Climate change, and an EPA administrator continuing to ignore the science, are making all of our efforts to restore this national treasure much harder.