Nice Farms Creamery: Grazing Cows Since Before It Was Cool 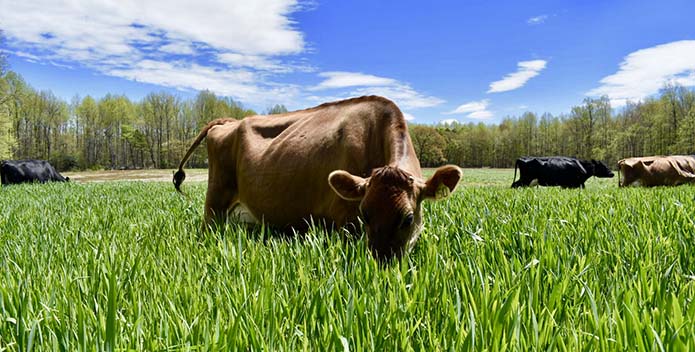 At Nice Farms Creamery, "They’ve been grazing since before it was cool."

While driving across Maryland’s rural eastern shore, miles and miles of farmland can be seen in almost every direction. Large fields of corn and soybeans spanning for acres, silos rising up in the distance, and beautiful glimpses of the Chesapeake Bay exemplify the character of this peaceful part of Maryland. Heading west into Caroline County, near the historic town of Federalsburg, there is a 200-acre dairy farm and creamery nestled between the many large-scale monoculture operations in the area. There are cows out to pasture, the green grass appears tall and thick in the fields, and a small dirt road leads to a few houses and structures on the property. This is Nice Farms Creamery. 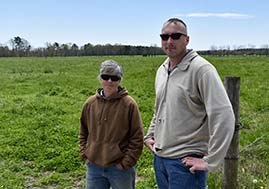 Bob Miller owns and operates Nice Farms Creamery. His parents, Bob Miller and Chase Tanner, bought the land in 1989 to expand their acreage after dairy farming up in New Jersey.

Bob Miller owns and operates Nice Farms Creamery. His parents, Bob Miller and Chase Tanner, bought the land in 1989 to expand their acreage after dairy farming up in New Jersey. The farm supports a mixed herd of 45 mature dairy cows and 25 younger stock on 112 acres of pasture. The cows are mostly grass-fed and are moved to a different pasture several times a day. Bob (the Elder) and Chase began grazing their cows on grass about 30 years ago. “They’ve been grazing since before it was cool”, says their son, Bob. Grazing almost year-round, he supplements their diet with hay and a little grain in the winter months to keep them well-fed.

Grazing cows in large open pastures on summer and winter annual grasses is better for both the environment and the cows’ health. This process mimics nature, similar to how the great American Bison once roamed the western prairies and fed on open, natural pastures. A cow’s grass-fed diet optimizes nutrition and foraging, allowing her to produce a superior and more nutritious quality of milk with a richer taste. The manure from the cow goes back into the earth to encourage healthy microbial soil and in return, the microbes in the soil take in the methane the cow emits. In addition, the pastures covered in annual and perennial grasses help to keep the soil covered, reducing erosion from wind and rainfall. These plants take up carbon dioxide from the air and input organic matter to the soil. This process allows water to percolate through the soil, protecting stream quality in the area.

Not only does the grazing management of Nice Farms Creamery benefit the environment, but the family’s dedication to planting trees has helped to buffer the run-off leaving the farm. A small stream on the property called Wolfpit Branch eventually runs into the Nanticoke River and ultimately the Chesapeake Bay. With this in mind, Bob Miller and Chase Tanner have used their own money to plant around 4,200 trees on the farm. These trees create a buffer around the Wolfpit and help to filter the run-off that will eventually end up in the Bay. Their sacrifice is a huge contribution to saving both the Nanticoke and the Chesapeake Bay.

It is hard to beat a product that tastes great and saves the Bay at the same time. Nice Farms Creamery gets the job done with their variety of dairy products made directly on the property. The creamery opened in 2009, and it has been running ever since. They produce whole milk, chocolate milk, yogurt, skim milk, pastured butter, seasonal egg nog, and old-fashioned ice cream. “The color and flavor of the milk reflects the changing seasons”, says Chase Tanner. Because the cows are feeding on different grasses throughout the Spring, Summer, Fall, and into the Winter, their diet is changing during the course of a year. With milk from large factory corporations, this change in flavor doesn’t exist because the cows are fed grain all year. Nice Farms Creamery is providing people with the true, natural flavors of how milk is supposed to taste. 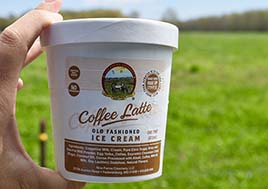 Nice Farms Creamery has also partnered with Rise Up Coffee; some of their old-fashioned ice cream is made with these delicious and sustainable beans.

The family sells their dairy products locally at several Farmers Markets, including the Anne Arundel County Farmers Market on Sundays, the Camden Avenue Farmers Market on Tuesdays in Salisbury, the Historic Lewes Farmers Market in Delaware on Saturdays, and the Kent Island Farmers Market on Thursdays. Furthermore, their products can be found at locations such as Chesapeake’s Bounty in Calvert County, Ocean City Organic, and more. Nice Farms Creamery has also partnered with Rise Up Coffee; some of their old-fashioned ice cream is made with these delicious and sustainable beans.

Supporting local dairy farmers is vital to their survival. “Society has moved away from agriculture, and we want to bring people closer to the farm again”, explains Bob (the younger). Many people have become removed from the natural flavors of real milk and are more accustomed to large corporations’ standardized milk. Bob Miller and Chase Tanner’s family grew up drinking their farm’s milk, and they enjoy watching other families grow up on it too. Nice Farms Creamery could not be more appreciative of all of their customers and supporters. When consumers continue to buy Nice Farms Creamery products, they are contributing to the Miller family tradition of local dairy farming, they are providing their dairy herd with a happy and healthy life, and they are doing their part in supporting a farm that is helping to save the Chesapeake Bay.