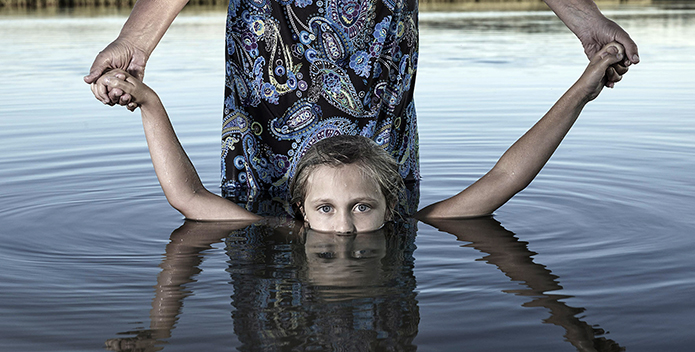 For decades, photographer James Balog has focused on the relationship between people and nature. His work documenting shrinking glaciers for National Geographic and the film Chasing Ice has shaped the conversation around climate change. For his latest project, Balog traveled across the country to examine how people are altering the elements of life—from wildfires to air pollution to rising waters. The new film The Human Element follows this journey, including visits to the Chesapeake Bay that explore sea level rise in Hampton Roads and Tangier Island.

CBF will present the Hampton Roads Premiere of The Human Element on the evening of Wednesday, Oct. 24, in Virginia Beach, followed immediately by a community conversation with Balog and CBF President Will Baker. Ahead of the event, Balog discussed his work and his experience on the Bay with CBF. Register here for this free event.

Why are you compelled to photograph the effects of climate change? 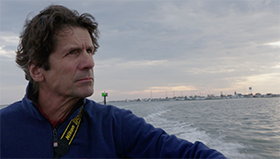 I believe that the immediacy of the photographic evidence can break down barriers of mental resistance in a way that nothing else can. The photographic act is an act of love, forcing the image-maker to stop, look, and look again, to feel whatever it is he or she has seen, and perhaps even to assimilate some aspect of the scene into the core of his or her being. It is a way of saying: Wait, let's pay attention—I saw this thing, this moment, had this experience, and it was important to me and it just might be important to you, the viewer, if you were to see it, too.

With my work, we're actually building art on a platform of science, and through that we're able to access both sides of the human brain, left brain/right brain, rational and intuitive, in a way that one approach or the other doesn't reach. The truth of a lot of scientific information is that it's incredibly powerful, it's incredibly important, and there's a huge amount of knowledge that's embedded in that community. And they don't have the channels for communicating it effectively to the public, outside of numbers in a newspaper article or magazine article. And the community has been extremely excited to have a whole different way of telling the story beyond the numbers and the graphs. And it's been really heart-warming to me to see the enthusiasm.

Which experience impressed you the most during your work on The Human Element?

Photographing the wildfires and the return to the ancestral coal mining village were both very powerful experiences. The wildfires are extraordinarily intimidating natural forces. I have profound respect for the firefighters, for the courage and tenacity and skill of the people who work in that environment. Also, the fires deeply impressed me with how they integrate the story of air, weather, climate, plant life, and human life.

As for my experience with the coal segment and as I say in the film, I discovered the nobility of the imagination and courage that those hard-working people who worked the mines vested in their survival. It greatly deepened my pride in my ancestors. At the same time, the experience of returning to that village sharpened my realization of how vital it is for our current civilization—and its industrialist and financier workers—to move beyond the patterns of the past and into the opportunities for the future.

We see what is happening around the planet. Which topic is most urgent in your eyes to work on next?

The question of energy use and supply remains a critical "front burner" issue. There is no single magic answer. We all must do what we can with the opportunities and tools we have in our own lives. But at the broad societal level, the most important thing is to recognize in the economies of the world that there is a cost to burning carbon. In practice, that means putting a tax on carbon—even though the word "tax" is an anathema to many. The revenue to be raised by a carbon tax can be put into solving a host of engineering, energy generation, infrastructure, and human problems. 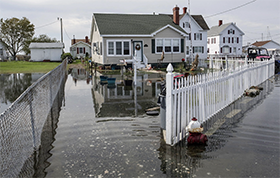 Sunny day flooding is a common occurrence on Tangier Island.

The Human Element is very personal and intimate. What happens to you with letting difficult human lives so close to you?

Meeting these people and learning about their circumstances gave me a profound deepening of my compassion for and interest in my fellow human beings. We are all in this same boat, in the same turbulent waters, breathing the same compromised air supply, together.

The most important supporting evidence is simply the voice of nature itself. We can see the impact on the world around us. That, along with the tremendous accumulation of scientific knowledge over the decades and centuries.

Why did you travel to the Chesapeake Bay?

We came to the Chesapeake Bay to shoot the "water" element because it is a hotspot of sea level rise in North America. It is at the convergence of weather, land and ocean, and changes in the earth's crust, and I wanted to see it for myself and simultaneously try to document those changes I was seeing with my camera. I have been photographing melting ice for several decades now as a way to see abrupt and distinct environmental changes. Coming to Hampton Roads where the impact of that melting ice is being felt today was a natural next step in my exploration of the water element.

What did you learn from the people living in Hampton Roads and Tangier Island?

Upon arriving in Hampton Roads, I was surprised to see how vulnerable these communities are to the rapidly changing water boundary. At the same time, I was encouraged and inspired by the region's adaptation planning and willingness to tackle the problems of climate change and sea level rise head on. Everyone we met, from city officials to naval base commanders, fisherman to concerned residents, everyone was motivated to work together to solve these problems and create a better future.

For a sneak peak of The Human Element, view the clip below. And join us October 24 for the Hampton Roads premiere of the film followed by a special discussion between Balog and CBF President Will Baker.