This Month on the Bay: Buffleheads and a Winter Miracle 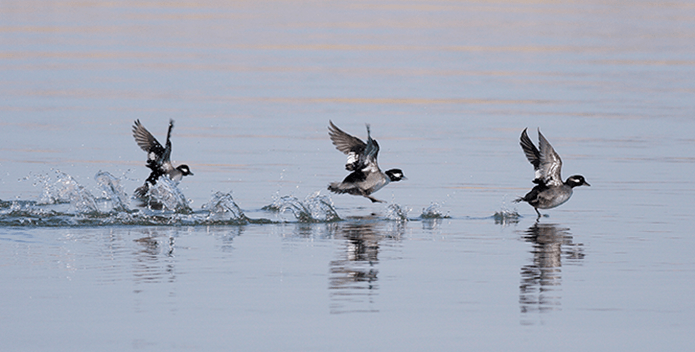 Buffleheads migrate from northern Alberta and Manitoba, Canada to the Chesapeake Bay region every winter.

These days, Ted Benge mostly wears a suit and analyzes spreadsheets in the Big Apple's financial district, but still he has the sharp outdoor eyes he honed by stalking elk with his father and brother around their Colorado home. It was great fun to have him aboard my skiff last week, prowling the Severn River to see what waterfowl had arrived. It's a couple of weeks too early for tundra swans to drop in on the river's underwater grass beds, but Ted quickly spotted a group of several dozen buffleheads feeding in open water close by the beds. 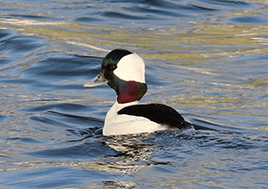 Drake buffleheads are about as gaudy as any bird can be with only black and white for colors. Females are much less noticeable, dark gray over light gray, with small white patches behind their eyes

Drake buffleheads are about as gaudy as any bird can be with only black and white for colors. At twenty yards on a gray day in early winter, the birds' dark heads with prominent white patches showed as they sat on the water, and as they rose to flight, their black backs contrasted sharply with their white bellies and secondary wing patches. The female buffleheads, like other waterfowl of their sex, were much less noticeable, dark gray over light gray, with small white patches behind their eyes. Ditto for their ducklings, both male and female, now close to their parents in size.

Considering that those ducklings are only five months old, they have grown and learned fast: they hatched from eggs laid in tree cavities in the boreal forests of northern Alberta and Manitoba. Among the smallest of the ducks, they somehow managed to keep up with their elders in migration, flying at speeds averaging 50 mph over more than a thousand miles with only a few stops.

Now why would such a small bird take on the challenges of that kind of migration? The answer, in general, is food and hospitable climate at both ends. The Canadian forests, pockmarked by small ponds and potholes, offer heavy hatches of high-protein insects and their larvae to the birds in the warm days of summer, but they ice up in winter, sending many buffleheads straight to the Chesapeake. Now what do little diving ducks find to eat here this month and beyond?

The answer is a variety, including some plant material. Those buffleheads that Ted picked out were close to a thick bed of sago pondweed, which offers them tender rootstocks and seeds. Their primary targets, though, are shellfish, including both crustaceans and mollusks. These choices allow them to tap a huge reservoir of cold-weather food based on the detritus—the biological remains—of the summer's growth of plants and animals. That means scraps of algae, marsh grasses, bacteria, barnacles, worms, tiny fish, mud crabs, grass shrimp, and everything else that lived there but has since died. This is an ultimate ecological waste-to-energy system. It's a sort of miracle that operates out of sight and out of mind (to us) all over the Bay's bottom.

The scavengers that pick through this material include deposit feeders such as marine worms, shrimp-like amphipods, pillbug-like isopods, and tiny mud crabs, as well as filter feeders that pump Bay water through their gills to catch detrital particles. Most of these are clams and mussels, especially two species of small macoma clams that bury in the bottom and hooked mussels that attach to hard surfaces like stone offshore breakwaters. The macomas draw water in and send it out through siphon tubes that extend up through sediment to the surface. If there is a lot of detritus on the bottom, they can also extend the siphons to work as deposit feeders.

Like other diving ducks, buffleheads have powerful feet set back on their bodies to propel them underwater. Their bills are small but sturdy, with a "nail" (small hook) at the tip for digging and grasping. Feeding in winter requires them to be efficient, in other words, not to expend any more energy diving than they must to gather adequate food, so they tend to stay in shallow water along shore, like the cove where Ted and I found that group.

So, the winter scraps left over from an estuary's rich summer fuel waterfowl that breed hundreds of miles away in Northern Canada. Sounds like a Tall Tale, doesn't it? But this system has worked for buffleheads for several millennia. Whether you see them on winter walks, paddles, or skiff trips, smile when you greet them. And thank all those unseen deposit and filter feeders that bring them here.

CBF in Maryland   CBF in Virginia