This Week in the Watershed: Salty Solutions 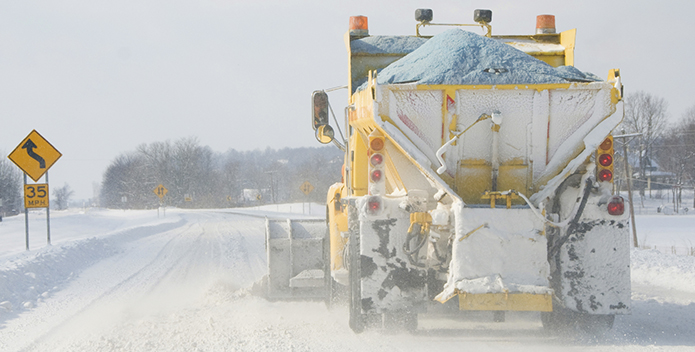 Excess road salt can harm the Bay and its rivers and streams.

As another polar vortex pays an unwelcome visit to our region, the salt trucks are out in full force. And the thousands of tons of salt spread on our roads and sidewalks can have harmful effects on the health of our rivers, streams, and the Chesapeake Bay.

After their initial job is complete, the salt and other chemicals used as deicers eventually find their way into our waterways. The increased salinity, particularly in freshwater rivers and streams, can be toxic to aquatic life. Salt can also kill vegetation on the side of roads and harm birds. What's more, some of the chemicals used as deicers include nitrates which can stimulate harmful algal blooms and dead zones.

Spreading less salt and refraining from using deicers that include nitrates are the obvious first steps to alleviate the salinity of our waterways. But a closer look reveals that our ultimate solution is to reduce all polluted runoff through the introduction of natural filters. These include planting forested buffers, building rain gardens, and incorporating other green infrastructure in our communities. Natural filters will not only reduce the amount of salt entering our waterways in the winter, but also the fertilizers, pesticides, oil, and countless other contaminants throughout the year.

While the warm days of summer might feel years away, the actions we take now will help determine the health of the waterways we will swim and fish in a few short months. And with the implementation of the Chesapeake Clean Water Blueprint, we will leave a legacy of clean water measured not in years, but generations.

This Week in the Watershed: Hellbender Defenders, Reducing Runoff, and Climate Consequences