What We Owe to Rachel Carson 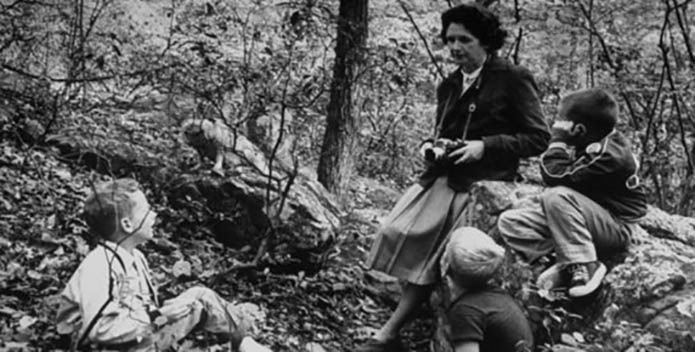 Marine biologist, writer, and conservationist Rachel Carson in the woods surrounded by the next generation of nature stewards.

Poet of the sea, environmental revolutionary, we remember the great heroine of the natural world

"We stand now where two roads diverge. But unlike the roads in Robert Frost's familiar poem, they are not equally fair. The road we have long been traveling is deceptively easy, a smooth superhighway on which we progress with great speed, but at its end lies disaster. The other fork of the road—the one 'less traveled by'—offers our last, our only chance to reach a destination that assures the preservation of our earth."  —Rachel Carson

In honor of Women's History Month, we are looking back at some of the natural world's greatest heroines. And perhaps there's no one more deserving of that descriptor than Rachel Carson.

Back in 1962—before there was an Earth Day, or EPA, or even a Chesapeake Bay Foundation—marine biologist, writer, and conservationist Rachel Carson wrote Silent Spring. The book that started it all, Spring is credited for launching the environmental movement. In it, Carson investigates the damage that the fast-growing use of DDT to control insects had inflicted on birds and other wildlife, and eventually humans.

Despite the initial uproar after the book's release (“What she wrote started a national quarrel," said CBS Reports in a one-hour special shortly after the book was published), Carson ultimately changed the way people look at the natural world. "Her message that humans cannot totally control nature, or eradicate species we don't like—at least not without harmful side effects—came through clearly. She advocated integrated management: using a minimum of chemicals combined with biological and cultural controls," says PBS' website.

William Shawn, managing editor of The New Yorker (where the book was printed in three parts in June of 1962), called Silent Spring in a letter to Carson: "a brilliant achievement . . . You have made it literature, full of beauty and loveliness and depth of feeling."

The year after Silent Spring came out, President Kennedy directed his Science Advisory Committee to investigate Carson's claims. Its investigation vindicated Carson's work and led to an immediate strengthening of chemical pesticide regulations. Seven years later, President Nixon established the Environmental Protection Agency with one of its first tasks being to ban the use of DDT and other harmful pesticides.

Carson died of cancer two years after Silent Spring was published, at age 56. On the plaque by the sea where her ashes were spread read the words, "Rachel Carson (1907-1964), Writer, Ecologist, Champion of the Natural World, Here at last returned to the sea," along with a quote from one of her last letters: "But most of all I shall remember the monarchs."

Carson's foresight and courage to speak out about human activities that destroy our natural world and the necessity that we all need to be good stewards of the Earth, led to tremendous strides in the environmental community. Here at the Chesapeake Bay Foundation, we are now facing an historic, unprecedented opportunity to really truly save the Bay through the Chesapeake Clean Water Blueprint. Perhaps we would never have come so far were it not for the heroic efforts of individuals like Carson.