What's the Deal with the Dead Zone? 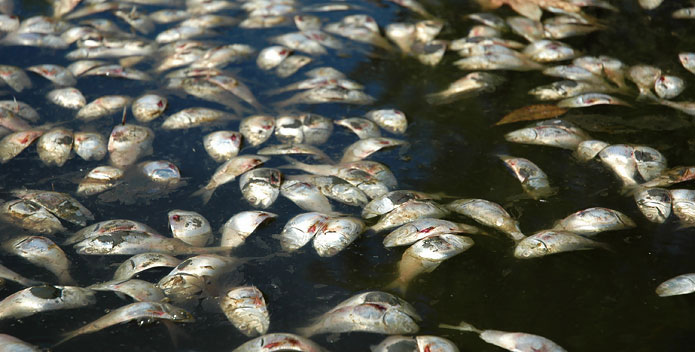 Dead zones and algal blooms, which rob our waters of oxygen, often result in devastating "fish kills" like this.

Scientists are predicting one of the largest Bay dead zones in decades this summer. But what does that really mean? Dr. McGee answers our questions.

No, it's not another Stephen King novel or Grateful Dead cover band. The “dead zone” is a very real environmental threat and has serious impacts on our Bay. Just last week, scientists at the University of Maryland Center for Environmental Science and University of Michigan said they expect the Chesapeake Bay's dead zone to be among the largest in decades this summer. But what actually is this rather ominous-sounding thing and what does it mean for our health, economy, and Bay? We sat down with CBF's Director of Science and Agricultural Policy (AKA our resident dead zone expert) Dr. Beth McGee for some answers:

What is a dead zone?
Dead zones are areas of the Bay and its tidal rivers, typically the bottom waters, that don’t have enough oxygen in the water to support aquatic life. With little or no oxygen, fish, crabs, oysters, and other aquatic animals literally suffocate. The dead zone forecast estimates the volume of the Bay that has insufficient oxygen during the summer.

What causes a dead zone?
The dead zone is caused by excessive nitrogen and phosphorus pollution from human activities entering our waterways. These nutrients feed the single-celled plants in the Bay called algae. When the algae die they sink to the bottom and are decomposed by bacteria. Oxygen is used up in this process.

How is the Chesapeake Bay's dead zone forecasted, and why are scientists predicting one of the largest this summer?
The forecast is largely based on the amount of pollution that comes down the Susquehanna River, the largest river feeding the Bay, from January through May. This, of course, is driven by precipitation. So, a wetter than average spring means more pollution and potentially a bigger dead zone. This year, above average river flows, caused by lots of precipitation, added large amounts of nitrogen and phosphorus pollution to the Bay.

How is the dead zone measured?
Scientists have been forecasting the Bay's dead zone for about 10 years but they have been measuring it during the summer months for more than 30. From June through August, state scientists conduct bi-monthly monitoring of the dead zone. They run transects down the Bay, measuring dissolved oxygen at regular intervals. Take a look to see results of this monitoring throughout the summer. Forecasting and measuring provide ways to test our understanding of what causes the dead zone, and it also increases public awareness of the problem.

What does a dead zone actually do?
Animals like oysters that can't move away from a dead zone can be killed—hence the name "dead zone"! Other animals, like striped bass (rockfish), can swim away from low oxygen water, but the fact that much of the bottom of the Bay doesn't have sufficient oxygen, reduces the amount of available habitat and can make them crowded and stressed.

How does the dead zone affect my health and those afternoon summer swims I love to partake in?
The dead zone doesn't directly affect humans perse, since we don't rely on getting oxygen from the water. BUT, high levels of polluted runoff are a concern. For one, other pollutants like harmful bacteria are also washed into our waterways during rain events. Check with your local health department to find out if local waters are safe for swimming.  In addition, excess nitrogen and phosphorus can cause blooms of harmful algae, that should also be avoided by humans. Take a look at the impacts of algal blooms in Virginia and Maryland.

How does climate change play into all this?
Scientists predict bigger storms and more precipitation due to climate change. Because more rain means more pollution, large dead zones may become the "new norm."

What can we do?
We will always be somewhat at the whim of mother nature, in terms of pollution loads and the dead zone. For instance, wetter years tend to be worse for water quality than dry years. BUT, what we do on the land greatly impacts the health of our rivers, streams, and Bay. So, implementing Best Management Practices in urban and agricultural lands (e.g., planting trees and streamside buffers, fencing cattle, etc.) will reduce the amount of polluted runoff that occurs during rain events. While we can't control mother nature, we can do much more to mitigate the effects of runoff from rain events.

Tell me some good news!
In 2017, the size of the Bay's dead zone was the second smallest on record. In 2018, the dead zone was average. Factors like wind can affect the accuracy of the dead zone forecasts, and wind did help reduce the dead zone in both 2017 and 2018. There are recent scientific studies that indicate that the way the Bay is processing nutrients is changing. That means that the same amount of pollution is having a lesser effect on the dead zone. That's good news and provides some reason for optimism—the Bay is showing resiliency and some ability to “cleanse itself.”

More specifically, a recent study by scientists at the University of Maryland indicates the Bay is responding to pollution-reduction efforts by starting to help itself. Scientists have detected a change in a feedback loop in the Bay's bottom waters that results in less fuel for algae and oxygen-consuming bacteria, and therefore more oxygen in bottom waters. One of the study's authors, a well-respected scientist, noted: "It's hard to overstate the significance of these findings."