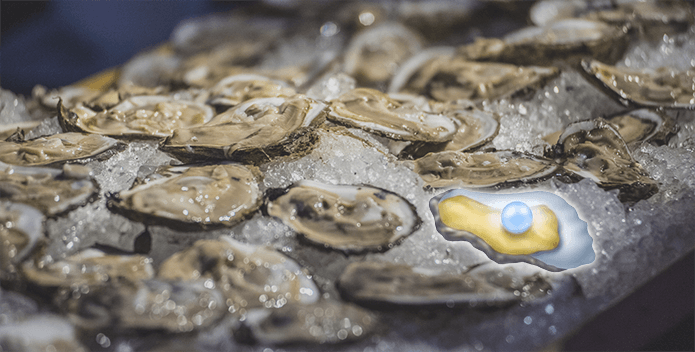 In honor of World Emoji Day, we’re celebrating the release of the oyster emoji and all there is to love about this critical Bay critter.

Just when you thought you were stuck trying to pass a Dungeness crab emoji off as a Chesapeake Bay blue crab, Bay lovers have a new emoji to be excited about.

The Unicode Consortium is brought us all a new favorite . . . the oyster emoji.

While it doesn't look exactly like the Crassostrea virginica we know and love, it'll get the job done. For one, you'll likely not find a pearl that size in an Eastern oyster. Like all members of the family Ostredae, the Eastern oyster can make small pearls from particles that enter the shell, but those pearls are insignificant in size and of no value when compared to the Pinctada's pearls. The latter are in a different order and are most likely the pearls in your family heirloom.

Perhaps an oyster emoji from the Chesapeake Bay would more appropriately have a pea crab in it. What's a pea crab you might ask? If you've shucked oysters yourself, you may have come across one or two. Pea crabs, or oyster crabs, are small soft-bodied crabs that live in bivalves like oysters and mussels. While the pea crab is considered a parasite, the relationship is more commensal as an oyster can grow healthily while a pea crab lives within its gills and feeds off the food it filters. And yes, you can eat them. Some prefer them fried, others raw—even George Washington was a fan of the little delicacies.

But why stop at just an oyster? Arguably an emoji of oyster reefs would be an even better representation of the Bay. Oyster reefs are important habitat in the Bay's waters and at one time were so large they even posed navigational hazards to Chesapeake Bay explorers like Captain John Smith. Oyster reefs are teeming with life, from small marine animals that live in the nooks and crannies between shells, to the large predator fish coming in for a snack—hundreds of animals rely oyster reefs.

Along with providing important habitat, oysters purify the Chesapeake Bay as they filter water for their food. An adult oyster can filter as much as 50 gallons of water a day.

It's for those reasons that we're working in Maryland and Virginia to help bring back the oyster population after years of overharvesting. From working with volunteer oyster gardeners, to growing oysters and building reef substrate at our oyster restoration centers, and establishing the Chesapeake Oyster Alliance with partners to add 10 billion oysters to the Bay by 2025—we're ready to help the Eastern oyster make an epic comeback in the Bay. Fair warning, a lot of oyster emojis will be used along the way.