Healthy Living and Family Legacy Under Threat in Union Hill 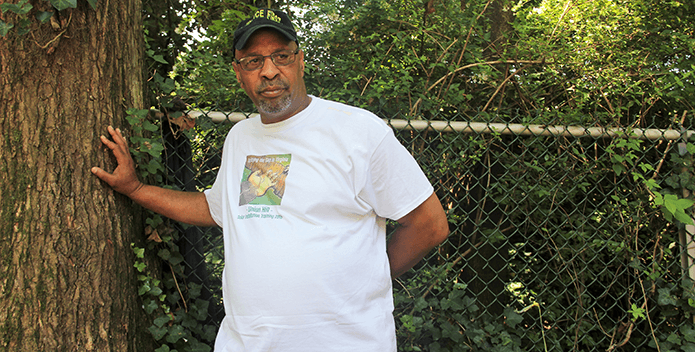 Richard Walker's ancestral homestead in Union Hill, VA is under threat by a planned compressor station, designed to pump gas through the proposed Atlantic Coast Pipeline.

When Richard Walker was growing up in New Jersey, he spent summers with his aunts and uncles at the family's ancestral homestead in Union Hill, a town in rural Buckingham County, Virginia, about 30 miles south of Charlottesville.

"I was a farmer at a young age," Walker said. "Every summer at 5 o'clock in the morning we were awakened to milk the cows, feed the chickens, slop the hogs, hoe potatoes, and walk the livestock out to graze."

Walker's experience those Virginia summers was a legacy passed down through generations. In 1885 his great great grandfather Taylor Harper, a former slave, bought 25 acres of land for $15 from a plantation where he had worked for two decades. Other freed slaves settled nearby, forming Union Hill.

Nowadays, this largely African American community lacks basic services, Walker said. No jobs, no broadband internet access, no grocery stores, and no doctors or hospitals. Many residents live below the poverty line.

But Union Hill does have tranquility, clean air, and the calm waters of the nearby James River. "Healthy living," as Walker put it.

Now this healthy living is under threat by a planned compressor station, designed to pump gas through the proposed Atlantic Coast Pipeline. This industrial facility would run on four large turbines that burn natural gas 24 hours a day, 365 days a year—creating constant noise and spewing emissions into Union Hill's skies.

While Virginia recently approved a permit for the facility, there still is hope for the people of Union Hill. CBF is challenging the permit in a lawsuit filed together with the Southern Environmental Law Center and partners, Friends of Buckingham. Twenty-eight state legislators, the Virginia State Conference NAACP, and the Center for Earth Ethics have signed a supporting brief.

This project has become a major environmental justice issue. The compressor station places at risk clean air, clean water, and the health of residents in the dozens of households within a mile. There's no reason why a large and potentially dangerous facility must be built in a quiet residential area with homes just yards away.

Many people living nearby already suffer from preexisting health conditions. Air pollution from the compressor station would increase the likelihood that those conditions would be exacerbated. The facility would also add new pollution to the Chesapeake Bay by pumping nitrogen oxides into the air, which wind up in nearby waterways and will be directly deposited to the Bay—contributing to dead zones.

Though Walker now lives more than an hour away in Richmond, he dove into his Union Hill roots after learning about the compressor station and has become a spokesman for family members in the community.

The family homestead borders the compressor station site, and part of the property is slated to be taken through eminent domain. Just this year Walker discovered three unmarked graves of his ancestors on that land. He's still searching for Taylor Harper's burial place.

For more than 60 years the family has held reunions on the homestead, with the next one coming up later this year. Five Harper families live within a quarter mile of the site. Walker is especially concerned about one of his cousins with respiratory issues. "The fumes and the methane and the gases coming out of that compressor station will all but kill her. I'm certain of that," he said.

The homestead has always been a haven for Walker. "My whole metabolism changes when I come to Union Hill because of the cleanliness of the air. That affects your entire system," he said. "All of that will be lost with this compressor station."