Osprey Rescue on the Lynnhaven River 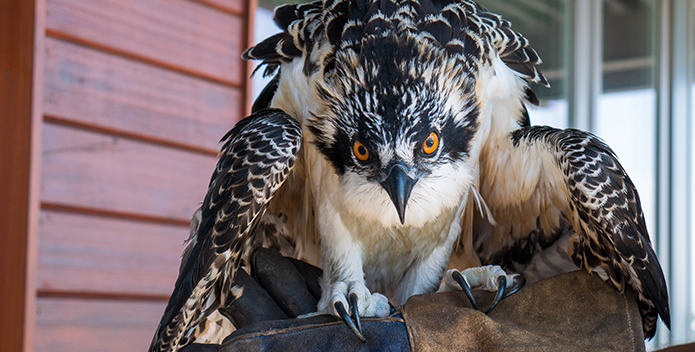 A young osprey was saved from near drowning after it fell from its next into the Lynnhaven River.

From a construction barge in the Lynnhaven Inlet, Thomas Hart of Cottrell Contracting watched as a young osprey fell from its nest, flew for 15 feet and then landed in the water, struggling. The osprey was drowning. The Lynnhaven Inlet has a strong current leading to the Bay, and the fledgling bird was in danger of being swept away. Thomas acted fast. 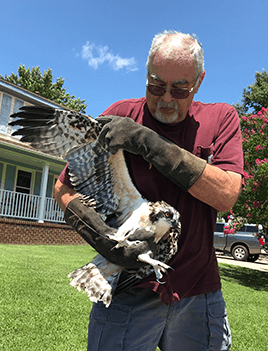 A wildlife rehabber examines the wing of the young osprey that was saved from the Lynnhaven River.

After taking a skiff into the river, Hart reached into the water with his bare hands to rescue the bird. After trying to reach animal rehabilitators from his cell phone for close to an hour, Hart took his boat to CBF's Brock Environmental Center where he brought it to the attention of the Brock Center staff. April Strickland, CBF's Director of Major Gifts for Hampton Roads, had past experience in animal rescue and rehabilitation and knew just who to call.

After being secured in comfortable conditions, the osprey was transported safely to be rehabilitated. The osprey will be fed and housed until it is deemed strong enough to live on its own back where it was found in the Lynnhaven.

It is important to remember that wildlife rescue and rehabilitation is not one of CBF's direct responsibilities. If you find injured or stranded wildlife in Virginia Beach, be sure to first call the VBSPCA Wildlife Response Team at 757-263-4762 to find a rehabilitator.