Oyster to the People 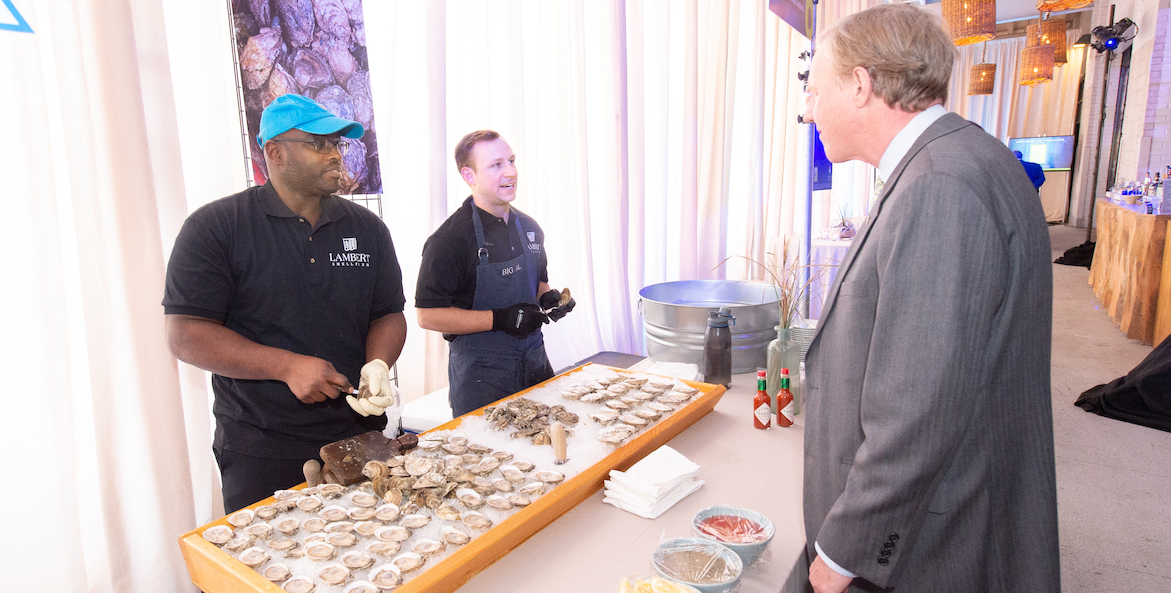 The skill with which Gardner Douglas (left) wields an oyster knife has earned him the moniker “Oyster Ninja.” Photo from February 2020.

A Chesapeake stabber is one of Gardner Douglas’ favorite tools.

Don’t worry. Douglas is a professional oyster shucker, and a Chesapeake stabber is a knife specifically designed to open oysters through the bill, or lip.

The skill with which Douglas wields the stabber—and a range of other oyster knives—has earned him the moniker “Oyster Ninja.”

Douglas grew up near Chincoteague, Virginia, a town famous for its ponies and its oysters. As an early career, the Army National Guard veteran did a tour in Afghanistan and several state-side deployments, assisting with weather-related disasters like Hurricanes Sandy and Irene. He still seeks the serenity of Virginia’s Eastern Shore when he needs to center.

Douglas’ father, who didn’t raise him but with whom he was reunited in his early 20s, taught him how to shuck oysters. Driven to succeed, Douglas has taken shucking to the nth degree. As a full-time, professional shucker at D.C’s Rappahannock Oyster Bar, he started entering shucking competitions.

His first—at the Baltimore Rotary Club—landed the Ninja second place and some prize money. His best finish—a national fifth-place title—was achieved at Boston’s Seafood Expo in 2015, where he represented the District of Columbia.

Now a husband with children of his own, Douglas lives in District Heights, Maryland, and serves the DMV with his mobile raw bar “S.S. Shucking.” “When the pandemic started, events were being cancelled,” Douglas explained. “I try to think forward and out of the box.” The Ninja came up with a solution: Bring the oysters to the people.

This was win-win solution for Douglas; oyster farmers; and residents of D.C., Maryland, and Virginia. Using proper safety precautions, Douglas transports shucked oysters on ice in metal pans or shucks on-site. His biggest order to date was delivered to residents of an Arlington, Virginia, community, who collectively ordered 600 on the half shell.

Douglas has also produced podcasts and videos to share his Ninja skills and love of oysters. Douglas contributed one video “Learn to Shuck with the Oyster Ninja” to CBF recently as part of the spring Blue Planet Forum, held online due to the pandemic.

The go-getter likes to do “anything positive for the Chesapeake Bay. I’m trying to be a part of it,” he says.