The Environment and Public Health: Connecting the Dots 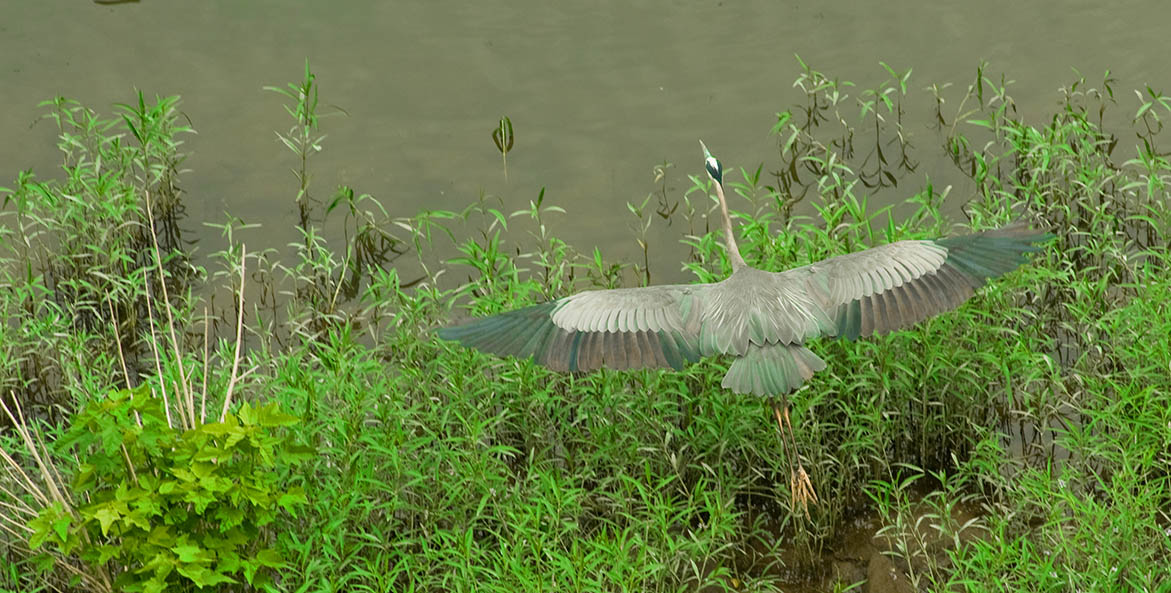 A heron taking flight from the banks of the Potomac River in Harper's Ferry, West Virginia.

In 1895, the Journal of the American Medical Association published an article titled "Why Baltimore is a Healthy City," in which the author extolls the city's "inexhaustible supply of excellent water" from the Gunpowder River as "one of our chief sources of health."

A growing body of public health research backs up what many of us sense intuitively: spending time in nature is good for us. Scientists have found links between exposure to green space and lower blood pressure, faster recovery times from surgery, an improved sense of wellbeing, and even reduced instances of gun violence. More urban tree cover can significantly reduce dangerous heat in cities and trap harmful air pollution.

Creating safe, clean, accessible spaces along waterfronts and in cities, and ensuring the community has agency in the creation process, can encourage more physical activity and a greater sense of community. Children who learn in nature and have access to green space in their schoolyards show improved focus, attention, and academic outcomes.

The need for these health benefits is more urgent than ever. The COVID-19 pandemic has taken an incalculable toll on the mental and physical wellbeing of Americans, disrupted schooling and livelihoods, and laid bare unacceptable inequities in health outcomes. All of this compounds already staggering health challenges.

Approximately one in five children and one in three adults struggle with obesity in the United States, and only a quarter meet physical activity guidelines, according to the Centers for Disease Control and Prevention (CDC). Obesity increases risk for heart disease, Type 2 diabetes, and stroke—three of the leading causes of death in the United States—as well as COVID-19. For individuals between the ages of 18 and 44, mental illnesses, such as depression, are the third most common cause of hospitalization, and more than half of all Americans will be diagnosed with a mental illness or disorder at some point in their life. These two epidemics—obesity and mental illness—cost the U.S. health system upwards of $370 billion each year.

Increasingly, the global health community recognizes that addressing these complex modern health challenges necessitates a holistic view of public health—one which focuses not only on the curing of disease but also on creating environments that promote health in the first place. In other words, an individual's health starts with the environment in which they live, learn, work, and play. Moreover, that environment is often strongly influenced by factors such as income, education, and, in the United States, a continuing legacy of structural racism that results in interwoven social and environmental injustices.

It should come as no surprise, then, that restoring our environment and bringing nature to people, where little or none exists, can—and should—help restore the health of our communities.

It's already happening here in the Chesapeake Bay watershed, where the nation's most comprehensive environmental rescue effort ever is underway. The Chesapeake Bay Foundation (CBF) is engaged in multiple efforts to curb harmful air emissions, which contribute one-third of the nitrogen pollution to the Bay. These efforts will also help alleviate ground-level ozone and particulate matter pollution that exacerbate lung and heart problems in cities like Baltimore, which ranks among the top 25 cities most polluted by ozone, according to the American Lung Association. Nature Sacred is cultivating and nurturing dozens of community-led Sacred Places to provide individual, community, and environmental benefits to those who live and work in the watershed.

Similarly, CBF is working with local partners in Richmond, Virginia, on an extensive new tree-planting initiative that aims to both reduce polluted runoff that harms the Bay and reduce the dangers of extreme heat in neighborhoods that were historically redlined under racially discriminatory housing practices. It's within areas like these that Nature Sacred is collaborating with community members and other partners to help establish new, quality greenspaces.

These efforts are even more important as we mitigate climate change. Researchers found that neighborhoods like this, in Richmond as well as Baltimore and Washington, D.C., can be as much as 16 degrees hotter than other parts of the city, in part due to a lack of trees and open space. Rising temperatures could cause thousands to tens of thousands of additional premature deaths in the United States each year by century's end, making heat one of the deadliest impacts of climate change.

As policymakers and communities throughout the watershed face the compounding, urgent challenges of environmental degradation, public health crises, racial injustice, and climate change, solutions like these that offer significant co-benefits cannot be ignored. In caring for the Bay's health, we care for our own.