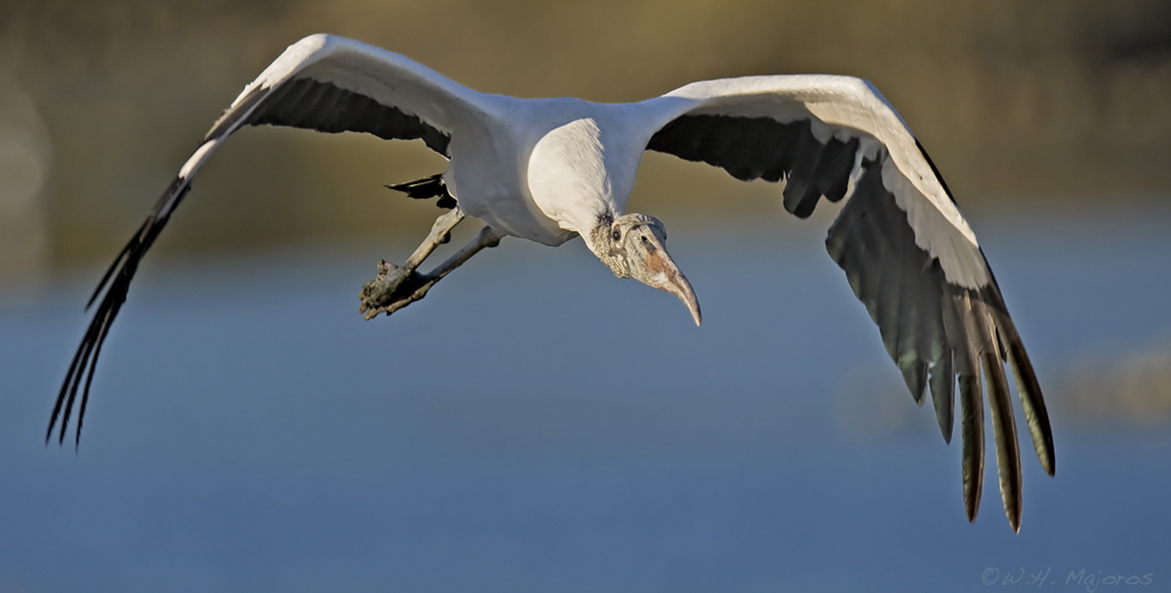 Wood Storks like this one in flight in Huntington Beach State Park, South Carolina, typically are only found in Florida, Georgia, and South America. Recently, one popped up in the Chesapeake Bay watershed.

The tropical Wood Stork is rarely seen in Maryland, but could have been blown north by Hurricane Ida

Edgar Rivas, a Potomac, Maryland, resident who regularly walks along the C&O Canal with his wife, knew something unusual was afoot when he saw the crowd gathered along the canal on a Monday.

"I'll be honest, I was not the first person to have seen it," Rivas said. He credits the birders, armed with telescopic camera lenses and high-powered binoculars with first finding the Wood Stork.

But Rivas knew a Wood Stork, with its long black beak, gray bald head, and large white body, wasn't supposed to be in Maryland. The birds are the only stork that lives in North America and are typically only found in Florida, Georgia, and South America.

"I went through my head, Wood Stork. Not local. Not usually in southern U.S. Very unusual," Rivas said. "I told them, 'I hope you saved some pictures for everybody else.'"

That day—Sept. 6—Rivas didn't find the bird that was the envy of others' eyes. But a few days later, on Sept. 9, Rivas and his wife went for another walk, and this time they got lucky.

When he came across the Wood Stork searching for food along the tow path, Rivas took out his phone, snapped a couple pictures and filmed a short video.

"It decided to stick around for us so we could see it," Rivas said. "For me, it was exciting to see a bird that isn't local. Well, on the one hand, the selfish part of me is very excited, but the unselfish part of me is like 'poor thing, what brought you here?' Was it a hurricane? Or is it outside its original range because the climate is getting warmer?"

For University of Maryland Professor Emeritus Donald Messersmith, who has traveled the world studying and writing about birds for more than 40 years, the answer, in this case, was Hurricane Ida.

Messersmith said the bird was likely blown up from the Gulf of Mexico by the storm, which made landfall in Louisiana on Aug. 29 and swept through Maryland Sept. 1.

"After hurricanes, all types of interesting birds sometimes show up," Messersmith said.

Other records likely indicate the Wood Stork's arrival shortly after the storm. While Rivas captured his photos Sept. 8, another photographer submitted a photo to the Maryland Biodiversity Project of a Wood Stork on Sept. 3—also taken at the C&O Canal in Potomac. Other photos of Wood Storks were captured in 2018 in Howard County and 2011 in St. Mary's County and posted on the project's website.

Messersmith noted that Wood Storks do not migrate and need wooded habitat near freshwater to build their nests in trees and find the fish and other aquatic animals that they eat. He said he has "hardly ever heard of them" in Maryland.

Messersmith differed the Wood Stork spotting from the recent news about Roseate Spoonbills found along the Anacostia River in Washington, D.C. The bright pink birds turned heads in August when they were found well north of their typical Gulf Coast and South American coastal habitat. Messersmith said the spoonbill likely was dispersing north to find new habitat, rather than pushed into the region by a hurricane.

Birds leaving traditional habitats and coming north is a confirmed trend, according to Messersmith.

"Global warming is really the main factor for these more southern birds to come north," Messersmith said. "There is a trend among smaller, more little birds. Mockingbirds are now common in New England now, when years ago, they never were. There's a whole list of birds that are moving northward gradually."

"Those birds can't go much farther North or they'll run out of land," Messersmith said about the increasing competition between birds for nesting sites and food amid a changing climate. "That means they could go extinct if there's no new territory."

He added that habitat destruction—such as from tree loss due to development, in particular clearing of tropical rainforests—is also harming bird populations.

"Destruction of forests, not only in North America, but also in South America where many birds spend the winter is a big problem," said Messersmith.

He added that we should expect to see more tropical birds in the Chesapeake Bay region. For example, Brown Pelicans, which previously were centered around the Gulf coast, now nest in Ocean City and can be found in New Jersey. Messersmith said White Ibis, which are typically found in Florida, can be spotted in Maryland marshes.

"I think it's safe to say it's a trend," Messersmith said. "The Wood Stork, I think is an accident, he probably got caught in the wind. But there will be a day, within 20 years maybe, that we'll see another Wood Stork that got here on its own, along with other southern birds. The Roseate Spoonbill may turn up more regularly. The White Ibis may start nesting in our area."

Got my first Montgomery County Wood Stork late this afternoon on the C&O Canal. It’s been an incredible year for Gulf Coast birds in Maryland. pic.twitter.com/aQ8QyhPdzA

For local birders, who are front-line witnesses to changing local bird demographics, that future seems almost present. Twitter user Max Wilson, who posted a photo of the Montgomery County Wood Stork on Sept. 2, wrote that other Gulf Coast birds spotted this year in Maryland also include Anhinga, Black-Bellied Whistling Ducks, and a Neotropic Cormorant.

"It's been an incredible year for Gulf Coasts birds in Maryland," wrote Wilson in his post.