Wood and Kreps: Floaters, Heelsplitters and Pigtoes—Why Virginia Must Invest in Freshwater Mussels 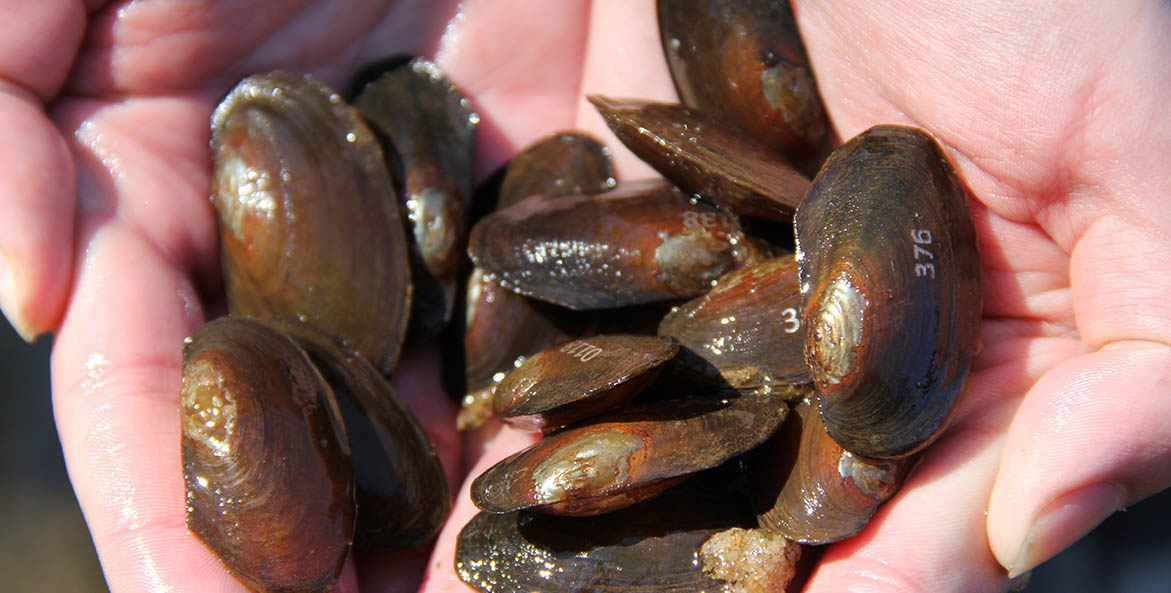 Freshwater mussels ready to be planted in a creek near Richmond, VA.

The following was first published in The Roanoke Times.

Freshwater mussels may be the most amazing Virginia natural wonder you've never heard of. Let's start with their strange names—the Green Floater, the Creek Heelsplitter, the Atlantic Pigtoe, the Creeper, the Sheepnose and the Appalachian Monkeyface, to name a few.

These titles give us intriguing hints about mussels, the unsung heroes of Virginia's rivers and streams. As mussel populations across the country face extinction, Virginia legislators are now considering proposals that could help bring them back.

Freshwater mussels are powerhouses that quietly clean and filter water 24 hours a day, removing algae, sediment and bacteria. Large groups amass in shoals, stabilizing the river bottom and keeping it from washing away. They fulfill a role much like the coral reefs of tropical seas.

The nooks and crannies between their shells form a nursery for aquatic insects and small fish, which attract bigger fish and create good fishing for anglers.

But mussels are also the most threatened family of animals in the country. Last year the Green Blossom mussel, a Southwest Virginia native, was officially declared extinct. We are losing mussel species before we fully understand their many benefits.

This year could be a turning point. Virginia hatcheries are successfully producing and growing both endangered and common mussels to transplant into rivers. However, a lack of reliable investment keeps that work from reaching its goal. The coming weeks will be crucial as Virginia state legislators consider increasing support for mussel restoration.

Virginia's nearly 80 mussel species live in rivers, creeks and streams across the commonwealth. Southwest Virginia boasts an unparalleled biodiversity hot spot centered on the Clinch River, which is home to 46 species of mussels, including 20 that are classified as endangered.

These mussels have developed surprising ways to survive, including amazing tricks to help their offspring reach new waters. Some species attract fish by sending a silvery lure with eye spots out from between their shells. The lure wiggles enticingly in the current, looking just like a minnow. When big fish strike the mussel releases a flurry of larvae that attach to the fish's gills. The unsuspecting fish then transports the young mussels far from their maternal home.

Freshwater mussels also hold a hidden beauty inside, with shells and pearls that shimmer with the colors of a river in the evening. Before the advent of plastic, shirt buttons were often made from these river treasures.

In the late 1800s, Clinch River mussels were so much in demand that a pearl rush took place downstream in Tennessee. The pearls sold for good money and required little experience or capital to get started, leading people to camp along riverbanks in great numbers to seek their fortune.

Since those long-gone days, overharvesting, pollution, dams and viruses have decimated mussel populations. In fact, in 1998 a single chemical tanker truck overturned in Tazewell County and killed 18,000 mussels in the Clinch River, including four federally endangered species.

Restoration projects that plant these mussels into waterways are taking place on the Clinch River, including a major effort coordinated by the Nature Conservancy and other parts of Virginia such as the South River in Waynesboro and the James River in Richmond. The Chesapeake Bay Foundation is bringing together mussel experts across states to incorporate mussel restoration in the Chesapeake Bay clean-up effort.

So far, these efforts have relied on intermittent funding that often falls short. Dedicated investment in surveying, protecting and restoring mussel populations across Virginia would be a real game changer. Virginia legislators are currently considering two key items. One, proposed by State Sen. Creigh Deeds, D-Bath, would fund efforts by mussel biologists to develop and implement a statewide mussel restoration strategy. A separate proposal by Del. Terry Kilgore, R-Scott, would finally allow for critical updates to the Marion mussel hatchery, which is pioneering techniques for mussel propagation, culture, and restoration.

Virginia should be proud to count freshwater mussel hot spots as an integral, if little-known, part of its natural heritage. Let's make sure that the slippershell, the pocketbook, the pimpleback and more of our unbelievable mussel species can continue filtering our rivers and streams, ensuring clean water for all of us who like to wade and swim.

Joe Wood, Ph.D., is the Virginia Senior Scientist for the Chesapeake Bay Foundation, where he works on issues including water quality, stormwater, agriculture, wastewater, and freshwater mussel restoration. He also frequently serves in technical and stakeholder advisory roles for Virginia state agencies.