A Symbol for Pennsylvania 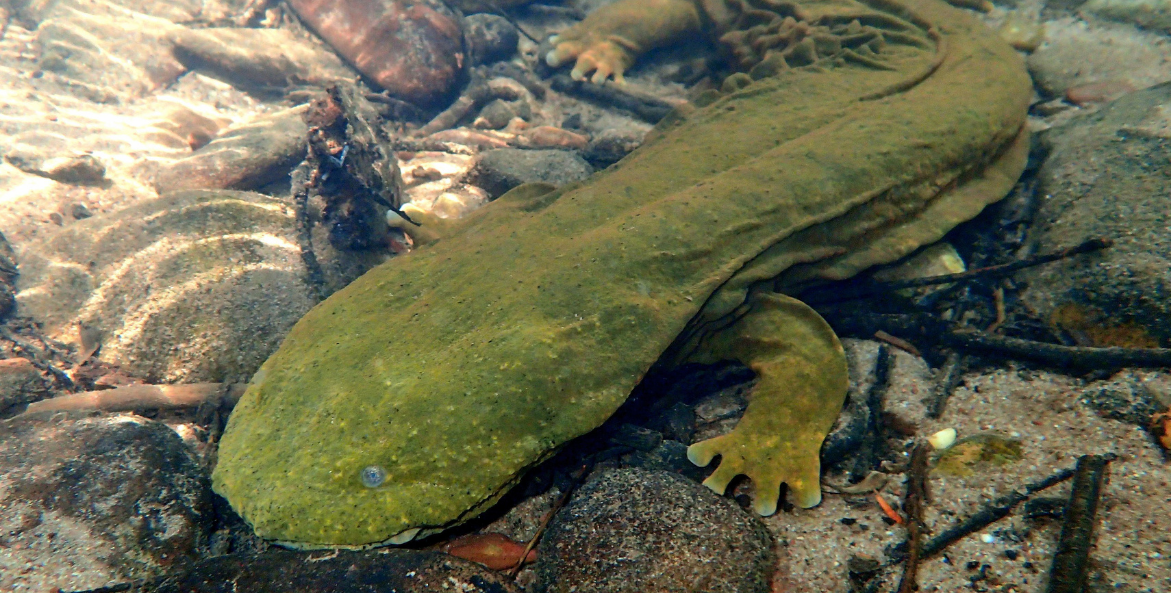 With their populations teetering and habitat facing multiple threats, the Eastern hellbender is still as charismatic and ugly a critter as ever.

The largest salamanders in North America were plentiful in the Bay watershed decades ago. Anglers caught so many of them by accident, they couldn’t have carried them all home if they had been legal.

Today, with their populations teetering and habitat facing multiple threats, the Eastern hellbender is still as charismatic and ugly a critter as ever.

“They are these dragons, monsters that live in our streams and most people don’t even know they are there,” said Brandon Ruhe of the Mid-Atlantic Center for Herpetology and Conservation (MACHAC).

Also known as “snot otters,” “mud-devils,” “water dogs,” and other names, Eastern hellbenders can grow up to 29 inches and have been known to live 30 years.

They prefer rocky streambeds, submerged boulders, and big flat rocks in shale formations. This is often in forested landscape that helps to keep the water shaded, cold, and oxygenated.

Soft, spongelike, slippery bodies, allow these shy salamanders to squeeze into crevices to seek refuge and wait for prey. Folds of wrinkled skin on their sides provide large surfaces through which they draw most of their oxygen. They have small teeth and feed mostly on crayfish.

That cold, clear, swift-running water, and plenty of places to hide are critical to survival.

Hellbender numbers are unstable throughout their range within the Susquehanna drainage, but not as much so in the Ohio drainage.

A lack of streamside trees along  waterways, especially in Pennsylvania, allows waters to warm, polluted runoff to enter rivers and streams, and silt to build up in streambeds. As a result, habitat for hellbenders has been degraded and their populations have been decimated.

In an effort to change course, notoriety was coming for the hellbender, and it was ready to make a cameo for clean water.

In 2016, CBF Student Leadership Council members spearheaded the campaign to recognize the Eastern hellbender and create greater awareness of the critical need to reduce pollution in Pennsylvania’s rivers and streams.

“I could not think of a better symbol for Pennsylvania, with all the waterways that we have and the emphasis we place on clean water, than to have the hellbender as a symbol that we could use throughout the state to promote clean water,” Senator Gene Yaw (R-23) said in sponsoring the bill to have the salamander designated as the Commonwealth’s official state amphibian.

Governor Tom Wolf signed it in 2019 and the Eastern hellbender became a flagship species for clean  water.

Dr. Peter Petokas, Research Associate at Lycoming College’s Clean Water Institute, has seen two populations of hellbenders disappear in more than 15 years he has studied them in Pennsylvania and New York. He estimates that 95 percent of the species’ habitat in the Susquehanna watershed no longer exists.

Petokas’ latest re-introduction effort was the release of 124 juvenile Eastern hellbenders this summer into a tributary stream in the upper reaches of the Susquehanna River in New York.

The young salamanders were raised in a lab from eggs hatched at the Bronx Zoo. Prime hellbender habitat had been created in the stream where they were released.

Disease and dams also take their tolls on hellbender numbers.

As for many seldom-seen critters, poaching also threatens hellbenders. In Pennsylvania they are considered a species of greatest conservation need. The designation means that hellbenders cannot be collected.

“There is a market for them,” Brandon Ruhe said. “The end point for collectors tends to be wealthy individuals, especially in Europe and Asia. It’s a very sophisticated hobbyist that will pay good money.”

As hellbenders decline from historical levels, there is hope for the critter and clean water.

“We were able to find them within 15 minutes of Harrisburg,” Ruhe said. “It is the first time they’ve been seen there in about 70 years.”

The Eastern hellbender has become a poster child for clean water in Pennsylvania.

Take a look at other interesting stories from our spring 2022 Save the Bay magazine.