The More We Eat, the Less They Eat 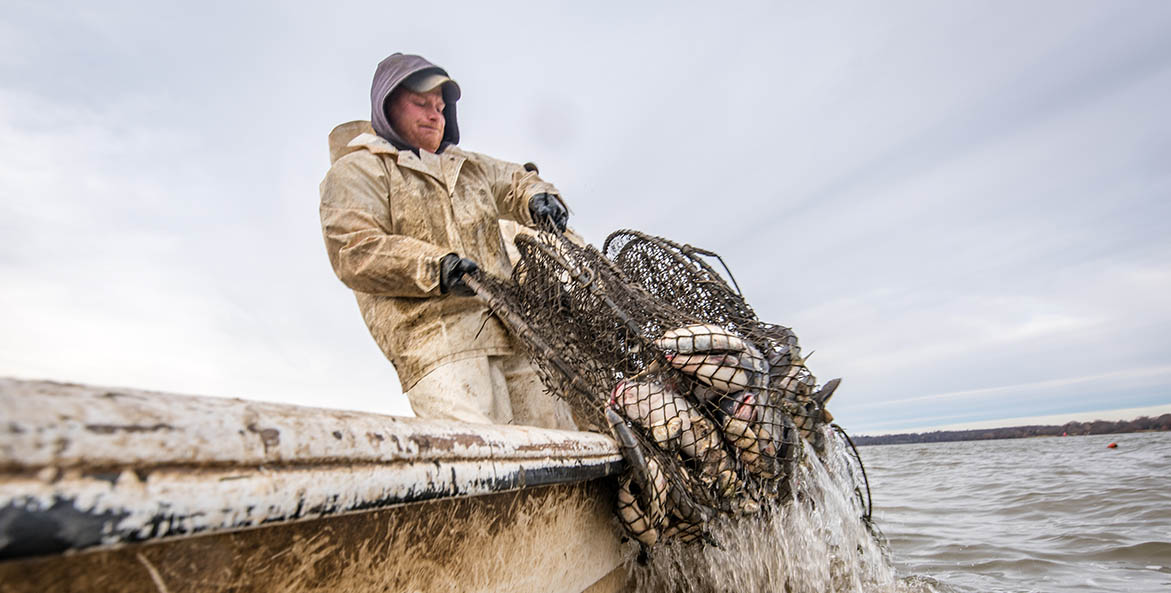 We can help get invasive blue catfish out of the Bay, where they harm native species, by supporting the growing market and enabling local watermen to more easily sell blue catfish.

The growing population of invasive blue catfish in the Bay spells trouble for species like blue crabs, but catching (and eating) them can help.

Long, slender, and slate blue, with black barbels that resemble whiskers—don't let these attractive fish fool you! Invasive to the Chesapeake Bay, blue catfish were introduced to Virginia rivers and streams in the late 1960s and early 1970s for recreational fishing. Now, the species can be found in almost all major Bay watershed tributaries, and the effects on the Bay ecosystem are far from positive.

As generalist feeders, blue catfish tend to feed on native species that are crucial to the Bay habitat, like menhaden and blue crabs. With catfish numbers growing, groups like the Chesapeake Bay Program's Invasive Catfish Workgroup and Maryland Department of Natural Resources have developed extensive plans for monitoring and reducing the blue catfish population in Bay waters. Along with the critical work of reducing pollution and restoring habitat, CBF has been encouraging commercial and recreational fishermen to target and harvest blue catfish to help reverse the worrying decline in blue crabs.

"The population is out of control and really wreaking havoc on native species, like our crabs, oysters, and rockfish," says Stone Slade, Director of Seafood Marketing at the Maryland Department of Agriculture. "And the best way to deal with this problem is to eat them."

That's good news for people like Billy Rice, a waterman on the Potomac River, who makes a living fishing for this invasive species. Originally a crabber, about 10 years ago, Rice and his son saw the potential as the blue catfish population started to boom. 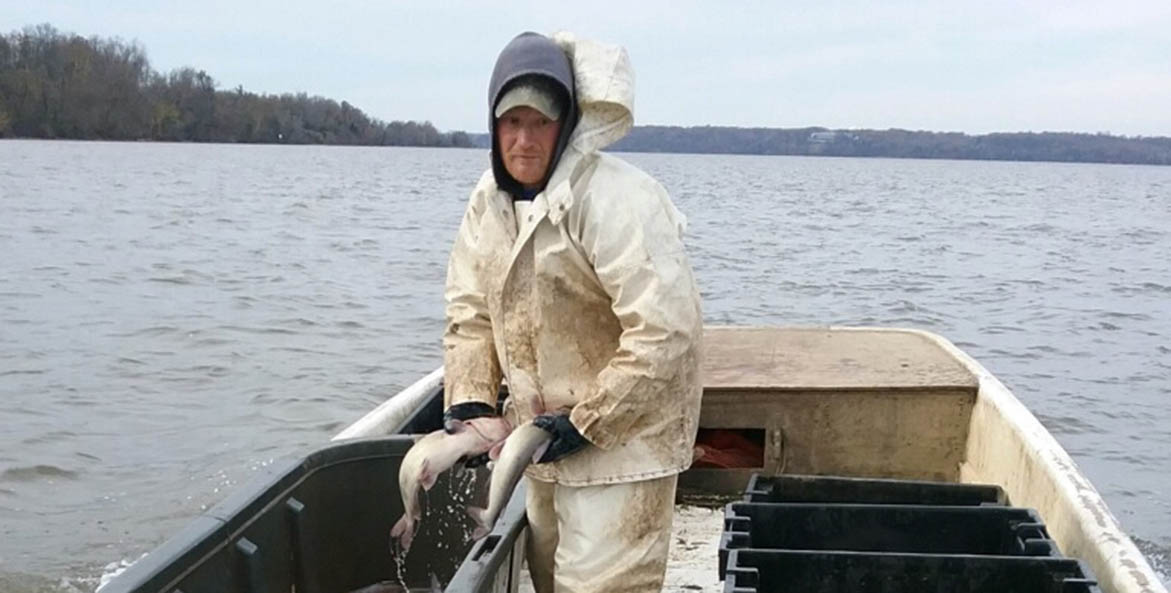 Rocky Rice fishes for blue catfish, an invasive species in the Chesapeake Bay. A growing population of blue catfish in the Bay is worrying because they eat native species like blue crabs, but the catfish also offer an opportunity for watermen.

"My son and I normally fish about 600 crab pots, but this year we catfished the whole summer and never set a crab pot," says Rice.

With Rice fishing longlines and his son fishing with pots, when the pair began, they were pulling in about 5,000 pounds of blue catfish a week. Now, with a stronger market and better prices, Rice says his son alone moves about 15,000 pounds a week.

"I think as a community of watermen, we can keep up with the problem," says Rice. "This year we're probably taking about 3 million pounds out of the Potomac."

Blue catfish were also featured at CBF's Maryland Rod & Reef Slam Fishing Tournament this month. The annual tournament was created to celebrate the difference restored oyster reefs are making in the return of healthy, diverse populations of reef fish in the Chesapeake Bay. It awards anglers based on how many species of fish they catch, including invasive species like Northern snakeheads and blue catfish. This year, anglers broke the tournament's record for total species caught record, logging 19 total.

At the tournament after party, held on October 16 at CBF headquarters in Annapolis, Slade and his team hosted a blue catfish cooking demo to demonstrate how tasty this fish really is. 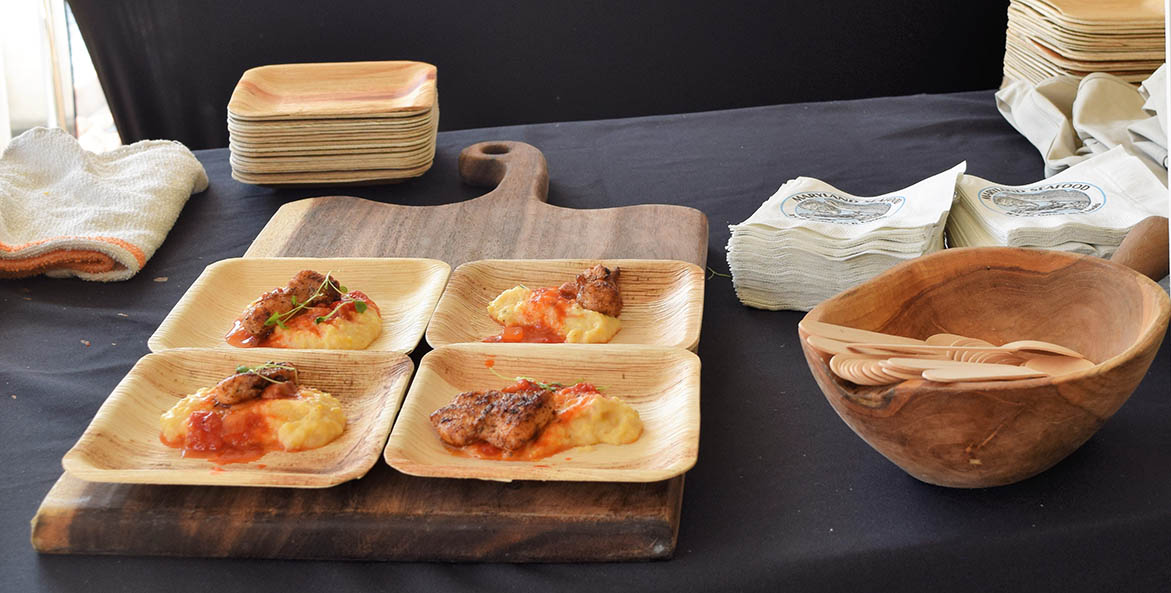 Blue catfish, an invasive species in the Bay, featured in a cooking demonstration at the after party of CBF's annual Maryland Rod & Reef Slam Fishing Tournament in October.

"They are a white, flaky fish, and really versatile. So there's a world of possibilities when it comes to cooking them," says Slade.

The good news is we can help to get these fish out of the Bay by supporting the growing market, which is why CBF has been advocating for the federal government to reverse a duplicative and wasteful food safety inspection requirement for catfish species to enable local watermen to more easily sell blue catfish. And with blue catfish being sold at most major grocery retailers across the area, and lots of fun recipes to try, there's no shortage of creative ways to add it to your dinner table.

"These fish are a win-win," says Slade. "They support our local watermen, taste fantastic, and are helping to save the Bay."