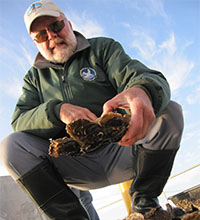 John Page Williams is CBF's Senior Naturalist. He joined the CBF staff in 1973 because he has been fish-obsessed since he was four years old. Nobody told him this work would turn into a study of constitutional law, municipal finance, and most of all, human behavior.

He's still fascinated by all the challenges involved in saving the Bay, and he still learns something every day that he's on the water.

John Page is no longer at CBF.