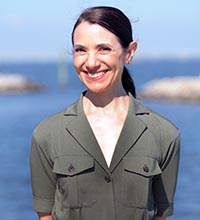 Lisa Caruso grew up in Baltimore County and began her career at The York (PA) Dispatch as the newspaper’s first environmental reporter. She’s a longtime resident of Washington, D.C., and is delighted to notch another first as CBF’s first communications coordinator for federal and local District issues. As a Georgetown University graduate, she has spent her entire life (except for junior year abroad in Paris) in the Bay’s 64,000-square-mile watershed.

Lisa covered politics and policy in the nation’s capital for more than two decades before making the jump to environmental communications and unleashing her inner advocate.

Away from the office, you’ll find her devouring nonfiction books on the latest subject to pique her curiosity, strolling around D.C.’s many colorful neighborhoods, or tirelessly rooting for her beloved Georgetown Hoyas basketball team. With friends in Eastport who sail, she’s partial to that Annapolis enclave—but eager to explore farther afield. She swears Old Bay is as delicious on corn on the cob as it is on crabs.