Back to the Future: Saving Dairy Farms and the Chesapeake Bay 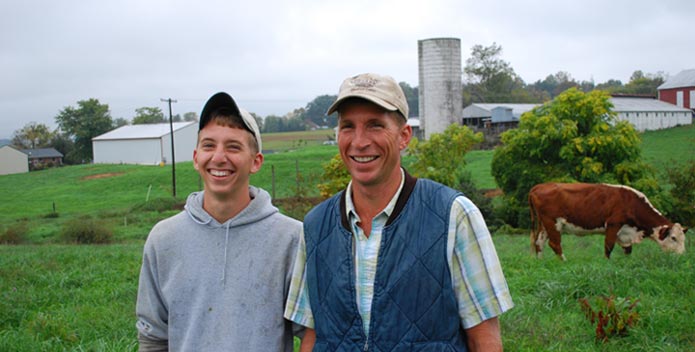 Ron Holter and his son Adam have boosted the profitability of their family dairy farm by switching to grazing, which also helps reduce pollution in the Bay.

Many of the Chesapeake region's dairy farms have gone out of business over the last two decades. Competition from industrial-scale dairies in the West and Midwest have made it hard for small family farms to survive. The trend has been: Get big, or get out.

But on the idyllic, rolling pastures of a 200-acre farm in Frederick County, Maryland, Ron Holter has found a way to keep his fifth-generation dairy business going. He is one of about 50 dairy farmers in Maryland who are boosting their profitability by going back in time.

Instead of confining his 100 cows in a steel building and feeding them a corn and protein mash, Ron and the others are taking the seemingly radical step of letting their animals live outside and feed themselves by eating grass.

"Cows eating grass—ruminants of any kind, eating grass—is the natural way, the God-created way, for these animals to live. They are not created to eat grain," Holter said, as he tended his cows with his son, Adam, 22, a sixth-generation dairyman. "You care about their welfare because they are living beings. They are not robots."

Holter is an instructor in the Maryland Grazers' Network, a program organized by CBF that encourages farmers to teach other farmers about the virtues of management intensive grazing. In this system, farmers regularly shift cows from one fenced-in paddock to another to keep the grass and animals healthy. The Grazers' Network recently expanded into Pennsylvania and West Virginia.

Grazing tends to be better for water and air quality than conventional farming. Compared to corn farms and concentrated animal feeding operations, pastures reduce sediment runoff to nearby streams by 87 percent. Our environment also benefits from less fertilizer runoff and reduced ammonia air pollution. Moreover, dairy from cows that graze have more Omega-3 fatty acids, which is good for the heart health of consumers.

But grazing isn't just better for the world—it's also better for the bank accounts of farmers. A University of Maryland study found that Holter's farm (as an example of grazing) saves save about $1,400 per cow per year compared to a standard dairy farm, including less money for feed, labor, and veterinary expenses.

Not all farmers have embraced the switch away from confining cows, which became the norm after World War II. Some farmers, for example, complain that it would be hard to convert their corn fields to cow pastures, because they have millions of dollars invested in corn-harvesting machinery.

Grazing treats the farmers more humanely too. Employees of many conventional dairy farms work around the clock, 365 days a year. But because grazing is less labor intensive, Ron Holter gets Christmas off and a lot more time to spend with his family.

Going back to the future has produced gifts for Ron's family and for everyone else—the preservation of the Holters' 1889 homestead and cleaner water for the streams that feed the Chesapeake Bay.