The Chesapeake Bay Foundation is urging Baltimore and state officials to quickly fix ongoing maintenance and operational issues at the Back River and Patapsco wastewater treatment plants and ensure similar issues don’t happen elsewhere after newly released data shows a major increase in Chesapeake Bay pollution from the plants.

On June 27, the EPA advised Maryland to ensure this sudden increase is reduced by bringing the two wastewater treatment plants back into compliance with permitted pollution limits. The 2021 increase was the largest since the Bay Program began tracking nitrogen pollution loads from Maryland wastewater plants in 2010. The 2.5 million pounds of additional nitrogen would have made up nearly 5 percent of the 48 million pounds of nitrogen that reached the Bay from all sources of pollution in Maryland in 2020, according to Bay Program data.

The increasing nitrogen from the failing wastewater plants will only make it more difficult for Maryland to reach its 2025 goal for nitrogen, which calls on the state to reduce nitrogen pollution to less than 44.7 million pounds per year. Maryland officials have planned for most of the pollution reductions needed to meet this goal to come from the wastewater sector. The state is also relying on upgraded plants to offset the impacts of new growth and climate change on the Bay.

Nitrogen pollution in the bay fuels algal blooms that decrease water clarity and causes dead zones in the water—areas devoid of dissolved oxygen that are inhospitable to marine life. In Baltimore, officials have issued a no-contact advisory for Back River due to high bacteria levels near the treatment plant causing public health risks. 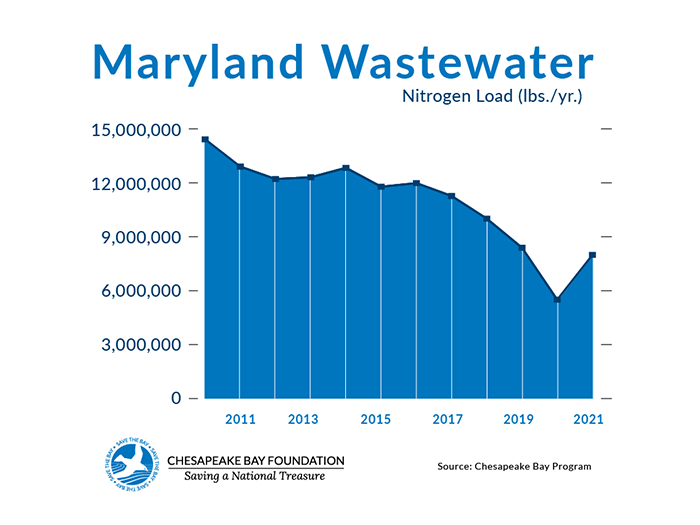 Nitrogen pollution from wastewater plants in Maryland increased by 2.5 million pounds in 2021 compared to 2020.

The Back River and Patapsco plants began to seriously fail in early 2021 after a lack of maintenance led to equipment malfunctions, according to Maryland Department of the Environment (MDE) inspection reports. The problems at the facilities only became public when the nonprofit Blue Water Baltimore raised water quality concerns to MDE after testing water near the Patapsco plant’s outfall.

Earlier this year, MDE took control of the Back River plant and brought in the Maryland Environmental Service to help Baltimore City’s Department of Public Works address the litany of problems at the plant. The Patapsco plant remains under Baltimore City control, but recent MDE inspections indicate it’s experiencing similar failures as Back River.

In response to declining enforcement activities at facilities permitted to pollute Maryland waterways, the Maryland General Assembly passed a law that went into effect July 1 requiring MDE to increase inspections and enforcement activities. CBF hopes the new law will prevent these types of failures at point-source polluters such as wastewater plants and industrial facilities that lead to increases in Chesapeake Bay pollution.

“Restoring and protecting the Chesapeake Bay requires constant vigilance. Lax oversight and management at Baltimore’s wastewater treatment plants has led to significant increases in pollution that threaten local water quality and the overall Bay cleanup in the state.

“In 2021, we saw a nearly 5 percent increase in overall Maryland nitrogen pollution to the Bay caused by failures at Baltimore’s two wastewater treatment plants. That’s unacceptable. The worsening water quality in Back River and the Patapsco River due to these failures has put public health at risk and harmed the quality of life for surrounding communities that can no longer enjoy their access to the water.

“We urge Baltimore and state officials to quickly fix the plants and ensure similar failures are prevented at other treatment plants and facilities permitted to pollute in the state.

“During the previous decade, Maryland has effectively spent billions of dollars to upgrade wastewater treatment plants. This work has significantly reduced nitrogen pollution in Chesapeake Bay. However, those hard-fought reductions depend on proper maintenance and oversight of treatment plants. If these facilities fail, the pollution reductions we’ve attributed to plant upgrades will be temporary and we’ll need even more pollution reductions from stormwater and agriculture to meet Chesapeake Bay Clean Water Blueprint requirements.”