A Cleaner Hampton River at Risk 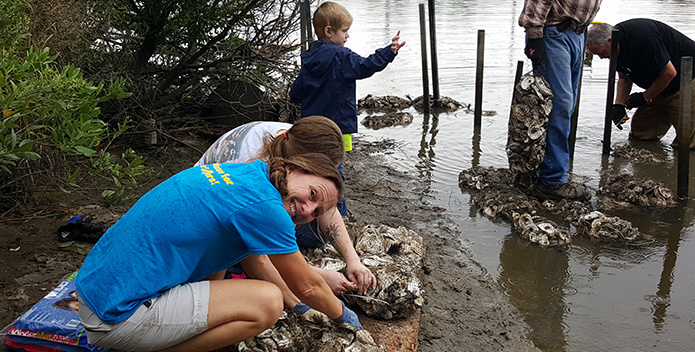 The following first appeared in the Daily Press.

Across the city of Hampton, people are pitching in to clean up the Hampton River. Waterfront homeowners are growing oysters to restore the river's historic reefs. Members of First Baptist Church planted a rain garden to stop polluted runoff. The city is putting in a large project off Mercury Boulevard that will retain water and prevent flooding.

But the promise of cleaner local waterways is at risk right now. These projects in Hampton were made possible by support from the Environmental Protection Agency's Chesapeake Bay Program—the very same program that President Donald Trump's administration has proposed eliminating.

As noted in a Daily Press editorial just last week, "there is reason for grave concern" when it comes to the future of the bay. The fate of our waters will be decided in the coming months as Congress debates a final budget and decides whether the Chesapeake Bay Program will continue to exist.

This debate is not about abstract policy details at an agency in Washington. It is about the rivers we see every day.

Just last week the Bay Foundation led a boat trip with local officials on the Hampton River to give a different perspective on issues such as stormwater, recurrent flooding, and the local crab and oyster population. As noted in a recent Daily Press article, after the trip Hampton Vice Mayor Linda Curtis recognized how the challenges facing the bay and Hampton can be fixed.

"It's the simplicity of the steps we have to take," she said. "It's something that everybody needs to take part in."

Bringing a community together around a common goal is exactly what this Bay Program-funded effort is doing in Hampton. It goes well beyond last week's boat trip. In June, NASA Langley Research Center led a tour showcasing innovative practices that reduce pollution entering the river. Last fall Hampton University students worked with the Chesapeake Bay Foundation to survey the Hampton River's oyster population.

The city is constructing a living shoreline at Bluebird Gap Farm that will filter pollution, reduce flooding, and create a wildlife habitat. At major intersections, the city is installing large bioretention projects. These are beautiful flowering gardens that also address pollution and flooding issues. The list goes on. Rain gardens are preventing pollution and stemming flooding at Spratley Gifted Center, Air Power Park, First Baptist, and Bluebird Gap Farm.

If you live in Hampton, you also may have received an insert in a recent utility bill describing simple things you can do to protect water quality, such as properly applying fertilizer, disposing of all pet waste, and installing a rain barrel. In August, the Chesapeake Bay Foundation will host free workshops for homeowners on installing measures that control flooding and beautify neighborhoods.

Other inspiring efforts are taking root. At Langley Air Force Base, students from Hampton schools recently built a new oyster reef. Students from across Hampton City Schools have had meaningful, hands-on outdoor learning experiences thanks to a NOAA Chesapeake Bay Watershed Education and Training grant, another program that would be eliminated under the president's proposed budget.

Things are ramping up, but a fully restored Hampton River won't happen overnight. Do we want to continue on this path to success? Or will support evaporate and cause these waters to suffer?

The work going on in the city of Hampton is a concrete example of local wins thanks to federal support matched by local dollars. This cuts across party lines. Both Republicans and Democrats are calling for investing in the EPA's Bay Program, including Reps. Scott Taylor, Bobby Scott, Rob Wittman, and Donald McEachin, and Sens. Tim Kaine and Mark Warner.

Fortunately, there is a lot we can do to make sure this important work continues. Let your representatives in Congress know why you care about Virginia's waterways, and how crucial it is to support full funding for the EPA's Chesapeake Bay Program.

If you want to get involved and make a difference in your home and community, get in touch with the Chesapeake Bay Foundation by emailing hamptonroads@cbf.org. The fate of our waters hang in the balance.