Return to the Bennett Farm 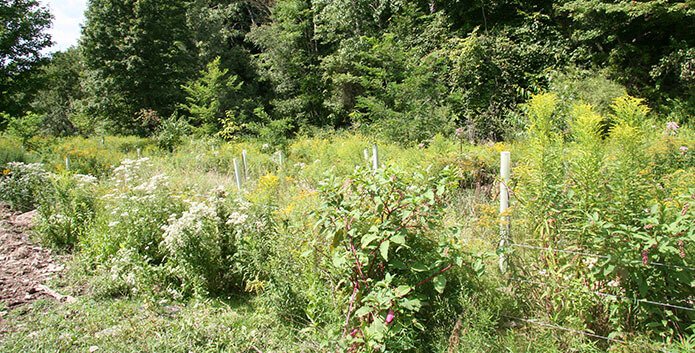 Stream side buffers, like this one on Bennett Farm, are among the most cost-effective tools for reducing polluted runoff.

State and local elected and conservation officials converged on Toad Hollow Road in Susquehanna County bearing congratulations and keen interest in seeing the Bennett Farm for themselves.

Eighty-two-year-old Claude Bennett and his family are a model of the collective power of partnerships and persistence through their long-term efforts to reduce polluted runoff and improve farm efficiency in the northeastern corner of the Commonwealth.

Pennsylvania's Chesapeake Bay Program was so impressed it gave the Bennett farm its Clean Water Farm Award "for protecting, and conserving soil and water." The Susquehanna Conservation District named Bennett its Outstanding Conservation Farmer of 2016.

CBF visited the Bennett farm two years ago and found workers hammering away at the framework for the concrete of a manure storage area. Orange flagging marked the parameters of a new adjacent concrete barnyard. Down the slope, plastic tubes protecting young trees stood in formation along Roe Creek.

Today, the finished barn and manure storage are under roof and serving 120 cows and calves. New drains and catch basins are doing their jobs. Young trees jut out of the tops of the tree tubes and lush native vegetation is waist-high along the creek.

The Bennett farm was a hub of activity by local, state, and federal partnerships intent on improving farm efficiency, maintaining the health of the herd, and protecting the water quality there and downstream.

Streamside buffers like the one along Roe Creek are among the most cost-effective tools for reducing polluted runoff. Streamside trees trap and filter nitrogen, phosphorus and sediment, Pennsylvania's most problematic pollutants, before they can run off into waters like Roe Creek, the Susquehanna River, and ultimately the Chesapeake Bay.

"It conserves water and topsoil and keeps our streams clean," Claude Bennett says of the pollution reduction measures, adding that he plans to do more on the farm. "It leaves the farm in better shape for my kids than when I took it." Funding has been approved for the Bennetts to add a small barn on the other side of Toad Hollow Road.

CBF assisted with the planting of 1,400 trees and shrubs on 12 acres, creating forested buffers along the creek and on a hillside. Funding came from the U.S. Department of Agriculture's (USDA) Conservation Reserve Enhancement Program (CREP). CREP pays 90 to 140 percent of the installation cost and annual rent, which is usually $40 to $240 per acre, per year.

CBF collaborated with the state Department of Environmental Protection (DEP) on the installation of more than 7,700 feet of fencing to keep cows and calves out of 77 acres that includes the creek and woodlots.

The Bennett project also qualified for CBF's Buffer Bonus program and a Growing Greener grazing grant, which earned it $27,500 to go toward the Environmental Quality Incentives Program (EQIP) for the barnyard and grazing practices that are not cost shared. EQIP provides financial and technical assistance and is funded by the Natural Resources Conservation Service (NRCS) through the USDA.

Jennifer Johns is the CBF restoration specialist who works with the Bennetts. "We try to make the best fit of the programs we have available to maximize the practices and the funding," she says. "The less out-of-pocket expense for the farmer, the better."

Johns says the Bennetts have reasons to be proud and deserve the recognition they have gotten.

"What they've done, to protect the creek; to not have the animals accessing it is huge," Johns says. "We don't have all that sediment loss and streambank erosion. The banks are stabilizing really well and grass is growing back."

"What is coming down through the buffer and off of the barnyard and pastures has a chance to slow down, be absorbed, used and processed," Johns adds. "The barnyard is fabulous and working great. They used our funding to rehabilitate the back pastures and the soil health is improved."

Claude Bennett began running the farm in 1953 and bought it in 1964 when he was told the only way he could get a loan to put an addition onto the barn, was to own it. Today the farm grows mostly hay and sells only a few cows. 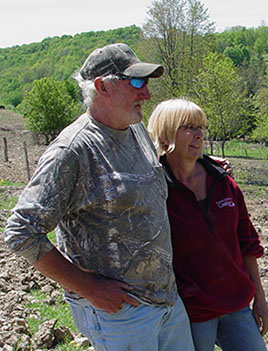 Terry, who as taken over daily operations of the farm, and his wife Patti. Patti says better facilities have improved their lives as "farm people."

Claude's son, Terry, has taken over daily operations of the 240-acre property and has been active in its restoration.

A torrential summer rain reinforced Terry's confidence in the power of streamside buffers.

"The water came down so hard off of the top hill that it jumped the road and took part of the basin out," Terry remembers. "It was in July and was at least five inches in four to five hours. It came down over the hill, but when it got to the buffer area, it stopped."

The buffer along the creek is 60 feet wide or more in places. "The buffer area will hold sediment back from getting into the creek and it makes cooler water because of the shade," Terry adds. "These are things from this area that go into the Chesapeake Bay. That's what we want to hold back."

Terry's wife Patti adds that the projects have also improved farm life in many ways.

"Now cows can walk in and out of the barn. Before, we had a barn that could fit only 20 cows. Now we can fit 100 and they are not crowded," Patti says. "Our pastures are so much better. The cows have access to clean water instead of slopping up the creek."

Patti says farm efficiency has improved as has their way of life. "Our life as farm people is better," she adds. "We're not spending 24 hours a day trying make ends meet. We can do our job in 7 or 8 hours instead of worrying around the clock because we have better facilities. Everything is better."