For Critters and Creeks, Salt is Bad Brew 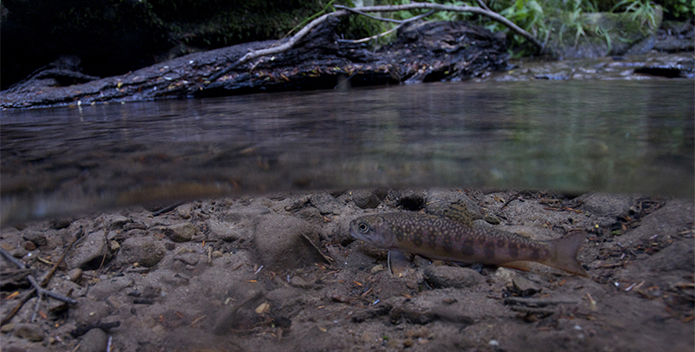 The following first appeared in The York Dispatch.

Pennsylvania is among northern states in what is referred to as the Salt Belt, named for their use of salt on roadways to control snow and ice.

For storm events last winter, PennDOT also pretreated roads with more than 9.8 million gallons of salt brine. The water in the brine evaporates and the remaining salt helps prevent ice from forming a strong bond with the road surface. PennDOT has 63 facilities statewide for making its own brine.

This winter, road warriors have been busy treating about 120,000 miles of Keystone State highways and 32,000 state and local bridges.

Everyone is familiar with table salt, or sodium chloride. This, along with chlorides containing magnesium, calcium, or potassium are typically used as deicers.

When these compounds do their job, they dissolve in the melted snow and ice where they either accumulate in nearby soils or find their way to the nearest waterbody.

The various compounds, but particularly the chloride, can be toxic to aquatic life in freshwater. In saltwater environments like the brackish Chesapeake Bay, animals aren't likely to react as negatively to additional chloride as will critters in freshwater.

For critters and creeks, it can be a bad brew.

A new study published in the Proceedings of the National Academy of Sciences suggests that salt ions are changing the chemistry of freshwater streams across the nation, including in Pennsylvania. Salty, alkaline freshwater can cause big problems for urban infrastructure, drinking water supplies, and the natural ecosystem.

Salt that stays on the land can be harmful to plants as evidenced by dead or dying, seemingly burned-out vegetation found along many roadways.

Around the home we can do our part to reduce winter's salty, polluted runoff, by not using salt on driveways, walkways, and other slick surfaces.

Alternatives to chloride-based ice melts like calcium magnesium acetate (CMA) exist, but may come with their own negative environmental impacts.

Be aware that store-bought salt products may include additives or impurities that include trace metals that can also be toxic. Some salts may also contain an anti-caking device such as forms of cyanide, which is also toxic. So read the label. Know what's in those products.

Sand is a popular go-to alternative to salt for improving traction on slick surfaces. But it too can find its way into streams where it can smother habitat important to fish and other aquatic life.

Regardless of which type of snow or ice melt you choose, proper application is key to preventing damage to vegetation and polluting nearby waters. As with the use of fertilizers, using just enough ice melt to get the job done, at the right time and in the right locations, is the key.

Its treachery aside, some winter snowpack is essential to having ample water supplies in the spring. Snowmelt on forests, farms, and fields tends to infiltrate into the groundwater. Along the way it's filtered by the soil and cooled. During dry summer months, cool, clean groundwater feeds many Pennsylvania streams.

On the roads and at home in winter, we encourage the wise use of salt and other chemicals when Pennsylvania paving turns slick. For our human and water bodies, reducing the use of salt is the healthy choice.