This Week in the Watershed: An Unjustifiable Risk 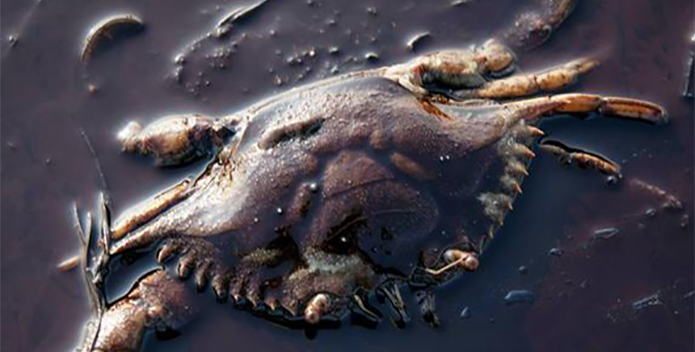 A crab covered in oil. An oil spill in the waters near the mouth of the Bay could destroy an entire year class of blue crabs.

Magic happens when fresh and salt water collide. Life explodes in estuaries, as they are some of the most productive ecosystems in the world. We witness this every day in the Chesapeake Bay, North America's largest estuary.

Here at CBF, we expend a massive amount of time, energy, and resources on protecting and restoring the rivers and streams that feed the Bay, and rightly so. But just as important to the environmental productivity of the Bay is the health of the ocean. The waters off the mouth of the Chesapeake are as much a part of the Bay system as all the fresh water rivers that feed it.

Given this reality, we are alarmed and concerned following the Trump administration's decision to open coastal waters off the Bay to oil drilling. As CBF President Will Baker states, "Drilling offshore poses unjustifiable risks to the Bay, its living resources, the tourism economy, and the many jobs that depend on clean water."

We are beginning to see real progress in Bay restoration. Just this week, the Chesapeake Bay Program released its Bay Barometer, which found the highest water quality in the Bay since they started keeping records in 1985. Now is not the time to put that progress at risk.

This Week in the Watershed: A New Bay Report Card, Ocean Health, and Ill-Advised Drilling