This Month on the Bay: Great Blue Herons Prepare for Spring in February 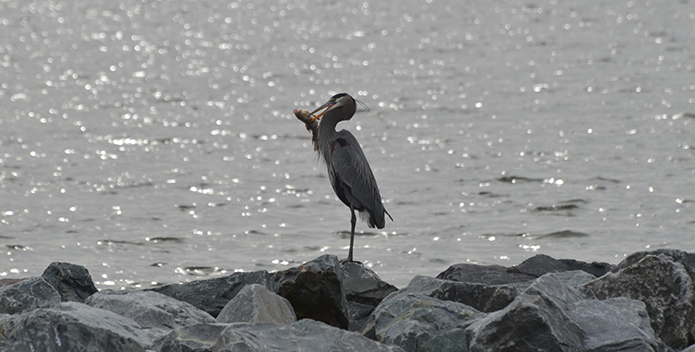 February is a challenging month for the Chesapeake’s great blue herons.

(Blackwalnut Creek, Annapolis)—The great blue heron was being smart, standing under sheltering pines at the edge of a marsh. The afternoon sun was taking the edge off a bitter “Alberta Clipper” northwest wind sweeping down this creek beside CBF’s Philip Merrill Center. The marsh lies at the head of a little cove, with a shallow, dark mud flat in front of it. If there was warmth in any creek or Baywater around the Merrill Center, it was here. The bird was losing less body heat in this sunny lee out of the wind, and if there was a killifish anywhere around to eat, it too would be seeking out this warmth. Besides, the high part of this marsh holds mice who burrow into its tussocks of insulating grasses but are no match for the lightning-quick strike of the great blue’s rapier-like bill.

February is a challenging month for the Chesapeake’s great blue herons, and not just because of the needs to minimize heat loss and find food in a bleak season. This is the month when the adults must summon the energy to court, pair up for the year, breed, and begin building nests. We know great blues mostly as solitary hunters, but each spring they seek out other heron pairs to establish rookeries of half-a-dozen to several hundred nests.

Favored rookery sites are mature wooded areas protected not only from humans but also marauders like raccoons, beside or close to water with plenty of food (fish, and later in the spring, small frogs, snakes, lizards, and small crabs). Some are as small as a quarter-acre patch of tall hardwoods on a Bayside point just south of the Chesapeake Bay Bridge near Annapolis. A larger one is a two-hundred-nest rookery in forested wetland protected by The Nature Conservancy in a rural part of Charles County, MD. The birds also like islands. A spectacular example is Watts, the last outpost of land on the now-mostly-underwater peninsula extending south from Crisfield, MD into Accomack County, VA between Pocomoke and Tangier Sounds. Now owned by the U.S. Fish & Wildlife Service and managed by the Blackwater National Wildlife Refuge, Watts offers tall, mixed hardwoods and pines, with a thick undergrowth of shrubs, including some champion poison ivy vines. Its several dozen great blue pairs nest in the tops of the trees, with eight other species of smaller herons nesting in a sort of pecking order below. 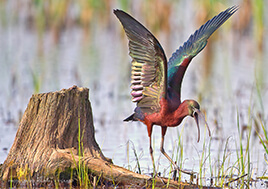 In April, Watts is a spectacular, raucous place, with leaves just emerging on the trees and a riot of birds raising chicks in the fly-up apartment houses of its trees. It’s firmly closed to public access during nesting season, but visitors in boats can watch with binoculars at a respectful distance. We do advise, though, to stay upwind of the island, as the odors of all those fish-eating birds are less than fragrant to human noses.

This month, though, the great blues are going through elaborate courtship dances. Once they pair up, the males begin offering nest materials like sticks to their mates, who begin constructing the nests. If you’re out on the water early in the season before the trees green up, keep an eye out for incipient heron rookeries on isolated points. You might just find a group of nests to watch as spring unfolds. (But stay safe out there. After all, winter challenges humans outdoors just as much as it does herons.)