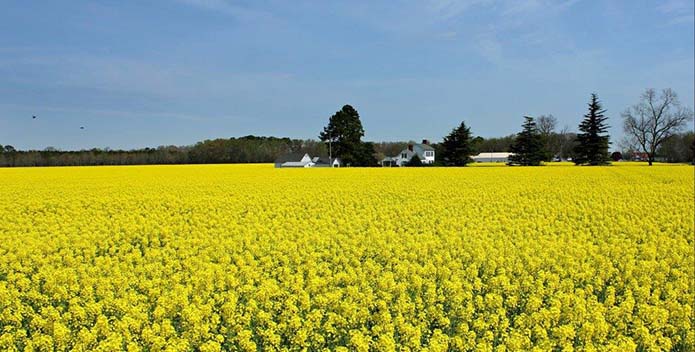 Rapeseed’s brilliant yellow blossoms that come in May delight both passers-by and pollinators.

Lynn Gayle and his son, Sands, farm a wide range of fields in Accomack County, Virginia, from their home base near Onancock. They are among the most active farmers in the Commonwealth, in both their cutting-edge approach to precision agriculture and their community involvement.

With a background in horticulture from Virginia Tech, Lynn came to the Eastern Shore in the early 1980s to grow tomatoes. He worked closely with the Natural Resources Conservation Service (NRCS) and the Eastern Shore Soil & Water Conservation District (SWCD) to establish grass waterways around his crops. Around 1990, he began to grow soybeans and wheat in rotation with the tomatoes, and when the tomato business closed at the end of the 2007 growing season, he "flipped the switch" completely to row crops, working 2,500 acres. 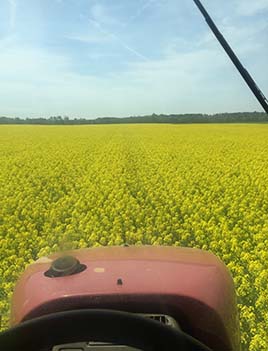 This kind of rapeseed is commonly used to produce canola oil.

Sands, meanwhile, has grown up on the Eastern Shore and worked with his father in the tomato industry during high school. He gained more horticulture experience working for a local garden center and from an internship in wheat at VA Tech's Warsaw Agricultural Research and Extension Center on the Northern Neck. He went through the Agricultural Technology Program at Virginia Tech, supplemented with some business and mechanical training before returning to the family farm, where he "hit the ground running," according to his father, who now "just do[es] what he tells me."

Lynn, his wife, Linda, and Sands incorporated Mt. Nebo Farms in 2013. Since then, they have managed all 2,500 acres with precision no-till techniques, raising corn, soybeans, and wheat.  NRCS and the Eastern Shore SWCD ("They and Extension give us a great network here," Lynn says.) helped them develop mixtures of rye and wheat cover crops to build organic matter and choose a ripper to develop texture so the soil can absorb moisture and retain it. Recently, the market for wheat has fallen, so they have begun raising high erucic acid rapeseed for Perdue AgriBusiness in Elizabeth City, North Carolina. In addition to being profitable, the rapeseed's brilliant yellow blossoms that come in May delight both passers-by and pollinators. 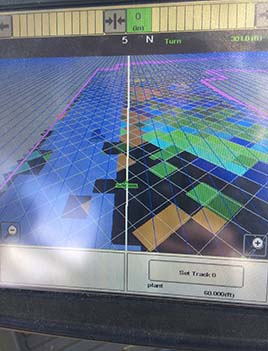 A SureFire® liquid application system loaded with precisely-formulated Helena® Nucleus® fertilizer allowed the Gayles to reduce applications from 25 gallons per acre (gpa) to 4 gpa. "Think about that," said Lynn. "Technology allows us to do it. With a controller showing on the screen of the sprayer, we're placing fertilizer into the furrows of sixteen rows at a time, running at 4 mph, dribbling that tiny, precisely-measured, uniformly-dissolved liquid by the thimble-full, according to our plants' needs. The canopy left from the cover crops reduces volatilization, so the fertilizer stays in the soil."

The Gayles send soil samples to Helena Chemical for analysis and map the textures of their fields with a Veris® electrical conductivity sensor, complemented with some academic study and "lots of dirt under our fingernails." They overlay those data onto maps and load them onto a thumb drive for their planter and variable rate fertilizer and lime applicator. Recently, Sands has begun to fly a drone over the Mt. Nebo fields, scouting crop status and looking for signs of soil compaction and ponding. Lynn envisions mounting a geo-referenced infrared sensor that provides plant vitality mapping for directing variable rate side dressing.

"We do conservation because we know it's right, and it's better for our operation," he said.  "We're getting there, already seeing results, but we can still get better. Sands is really running at a higher level." This proud father was delighted that the Department of Conservation and Recreation and the Eastern Shore SWCD recognized Sands and Mt. Nebo Farms with the Coastal Basin 2017 Clean Water Farm Award.  He is also a member of the Farm Bureau-Eastern Shore Young Farmers. When Sands isn't farming, he fishes the Bay for red drum and cobia. 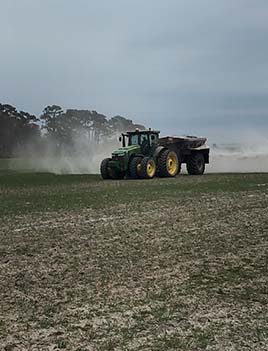 Spreading fertilizer more efficiently means less runs off the farm and into the local waterways.

Lynn Gayle is hardly retired, though. When we last rang his cell phone, Sands answered because his father was "under the tractor." When he isn't turning a wrench, or doing what Sands tells him to do, Lynn serves on both the Virginia Small Grains Board and the Virginia Potato & Vegetable Growers Board. He is also President of Accomack County Farm Bureau, a member of the County Planning Commission, and a member of its Board of Zoning Appeals. He is also a former member of the Virginia Agribusiness Council, the Pesticide Control Board and a past recipient of the Dupont Young Farmer Award in 2000. Finally, Lynn holds a 100-Ton Coast Guard Captain's license with which he offers on-the-water excursions and picnics aboard Major Gayle, his 40' thoroughbred Chesapeake Bay charterboat.

We're not sure that either of the Gayles ever sleeps, but Virginia can be thankful for all they contribute to clean water and healthy agriculture.