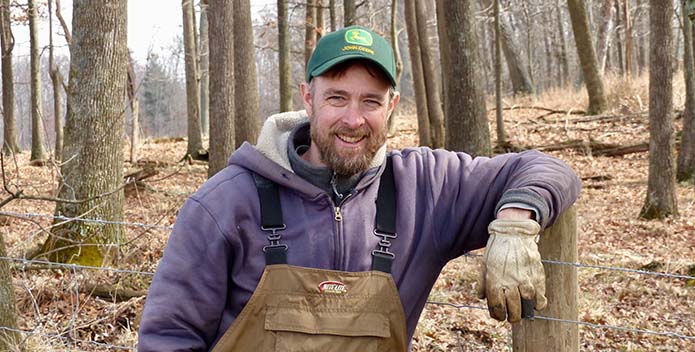 A rotational grazing system Miller implemented on his farm has made working his cows easier.

"I took a measuring wheel and measured how far my cows had to walk for water—2,830 feet, that's half a mile," Miller said.

"If I was going to make this work, there had to be more waterers for the cows and better grazing distribution," Miller explained.

"We used to feed cattle in a section of the woods next to the pasture. All those trees died," Miller said. "We put a fence around the woods so the cows couldn't get in there. That made our EQIP application rank higher. And besides, I was tired of chasing cows and calves in there and I was tired of worrying about acorn poisoning."

Moving cattle from the far reaches of the farm to the barn used to be difficult. Dividing the pastures into smaller units with access to water in each one allowed Miller to rotate his pastures and afforded much greater ease of herd movement.

"It used to take us two days and four or five people to get the cows into the barn to work them. Now I can get them into the barnyard by myself in an hour," Miller said.

Windy Hill Farm is in the Middle River watershed, in the headwaters of the Shenandoah River. It clearly produces more forage, faster growing timber, and saves this farmer time, thanks to the funding and technical assistance of EQIP. "The EQIP program made this happen," Miller said.