This Month on the Bay: Springtime Silver in the Rivers in April 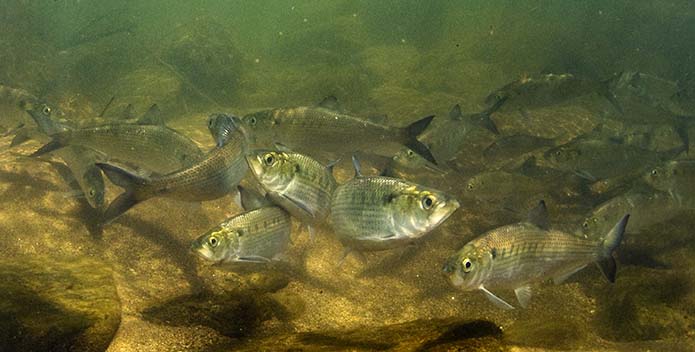 In the spring, our Chesapeake swells with silver: shad and river herring. Like salmon, these fish are anadromous; that is, the adults run upstream into fresh water to spawn but then return to the Atlantic to live for the rest of the year. The resulting new generations develop from fertilized eggs into fry and then juveniles in their natal streams, feeding and growing over the summer before migrating to the ocean, where they somehow meet with the adult stocks for the winter. In spring, the cycle repeats itself. 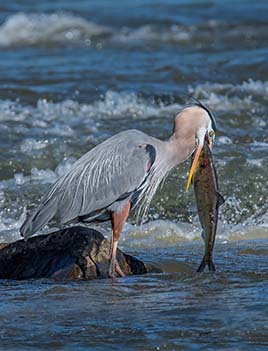 After a long winter, the epic runs of shad and river herring offered fresh food to all sorts of hungry, piscivorous Bay residents, from great blue herons, ospreys, river otters, and rockfish to humans, especially on the James, Potomac, and Susquehanna rivers.

Research indicates that these fish seek to live their lives within a relatively narrow temperature window of roughly 45-70°F., with variations between species. There are four species, all belonging to the genus Alosa: American shad (Alosa sapidissima), hickory shad (Alosa mediocris), alewife herring (Alosa pseudoharengus), and blueback herring (Alosa aestivalis).  Each of these fish migrates hundreds to thousands of miles over the course of a year, and historically, the springtime runs up Chesapeake rivers numbered in the millions. After a long winter, these epic runs offered fresh food to all sorts of hungry, piscivorous Bay residents, from great blue herons, ospreys, river otters, and rockfish to humans, especially on the James, Potomac, and Susquehanna rivers.

Now why in the world would it be beneficial for any species, let alone four, to develop such a strenuous, intricate, and perilous life cycle? First off, what food sources are extensive enough to fuel these fish by the millions? Second, how do they avoid being wiped out by a gauntlet of predators?

As is typical, we have the best answers for the American shad, because through the eighteenth, nineteenth, and early twentieth centuries, they were the most valuable commercial fish, not just in the Chesapeake but along the entire Atlantic coast. Theirs is a long, fascinating story. If you'd like the full dose, read John McPhee's classic book The Founding Fish (Farrar, Straus, and Giroux: New York, 2002), but here's a quick summary. These fish swim constantly, forcing water with dissolved oxygen over their gills, which also have long, fan-like rakers on their after edges that filter out zooplankton (especially tiny crustaceans) in the process. In other words, shad eat very low on the food web, tapping the huge sources of plankton available to them within their temperature range in coastal waters.

American shad eggs in a hatchery. Restoration efforts continue for all four species of shad and river herring common in the Bay watershed, however, under the aegis of the Chesapeake Bay Program partnership of federal and state agencies, the Potomac, in particular, has reached its restoration goal for American shad.

Shad do not feed when on their spawning runs, but there seems to be enough advantage to starting off their young in upstream waters with fewer predators than they face in the open ocean to make the long migrations worthwhile. They also produce prodigious numbers of eggs to ensure survival of a few. As to the gauntlet, in the ocean, shad travel in large but tightly coordinated schools whose numbers can confuse predators like large rockfish, tunas, and marine mammals such as dolphins. They are also very fast, powerful swimmers, as anyone who has caught and released one on rod and line during a spawning run can attest (though they do not feed then, they will strike small lures and flies). Columns of muscles directly attached to their backbones by legendarily profuse bones drive their streamlined shapes and deeply forked tails.  Their eyesight is keen, and their scales are deciduous, i.e., they fall off readily, making the shad slippery to grab. Finally, they have highly sensitive hearing systems that can detect a wide range of sounds, including the high frequencies that dolphins use for echolocation.

Because the other three Alosa species have lower value to us, we have learned less about them, but they follow similar—though apparently less ambitious—life cycles. All four are edible to us as well as to the aquatic predators. Note that the American shad's species name, sapidissima, means most savory, with good reason. And both species of river herring have historically been low-cost standards when salted or smoked. The roe of all three has always been a prized springtime food. At Mount Vernon in the late eighteenth century, George Washington's haul seine crews caught enough from the Potomac to sell shad by the hundred and herring by the thousand. The hickory shad's species name, mediocris, suggests only modest value, but more on them below.

Today, the runs of all four are much diminished, due to the usual human causes: pollution, overfishing, and blockages like dams that closed off ancestral spawning grounds. Efforts to protect and restock, and to remove dams or provide fishways around them have produced limited results, and harvests are prohibited. The restoration efforts continue, however, under the aegis of the Chesapeake Bay Program partnership of federal and state agencies, the Potomac, in particular, has reached its restoration goal for American shad. 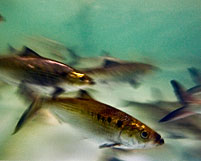 Throughout all the rivers, the hickory shad has over the past twenty years begun to rebound on its own. Scientifically we know the least about this fish, but it appears to eat at least some small fish, so it is quite likely to strike a small lure or fly. Adults are typically 16-22" long, and they are extraordinary athletes. An angler wading in a stream may well have to look up to see a hooked hickory when it jumps, cartwheeling several times its length into the air. Wade-fishing is also arguably the safest way to handle hickories, since it is easy to release them gently but quickly without lifting them into the air.

For this writer, there is no finer way to welcome spring to the Chesapeake than to stand (carefully and appropriately clothed) with friends along or in the James at Richmond, the Rappahannock at Falmouth, the Potomac around Chain Bridge, the Choptank at Red Bridges, or the Susquehanna's Deer and Octoraro Creeks on a spring day, catching and releasing quicksilver hickory shad. To us, there is nothing mediocre about them. May they and their valuable relatives prosper as we continue to help the Chesapeake restore its health.