Parachutes for the Planet: Aiming for a Livable Future 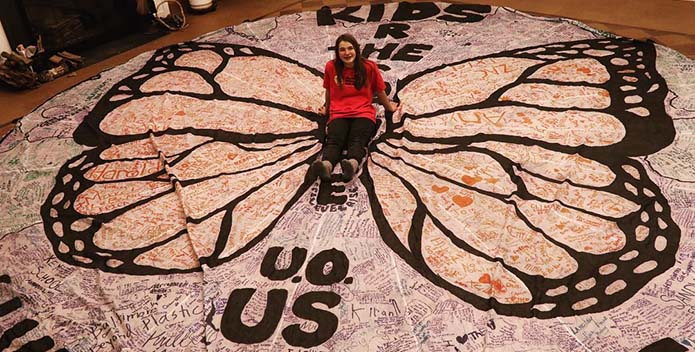 On April 22nd I was honored and humbled to receive the Promise for the Planet Award from the National Aquarium. I was stunned that I was selected because there are so many young people in the Chesapeake area that I admire who are doing incredible work. And I could not have imagined I would be where I am today.

In March of 2017, I stood in my driveway overwhelmed by two giant black butterfly wings laid out on a white parachute. The second Peoples’ Climate March in Washington, DC was scheduled for the end of that April, and I was determined to represent the concerns of my generation. So, I got a huge white play parachute and chose the monarch butterfly to symbolize responsibility to future generations.

Monarchs go through five generations at their breeding grounds each summer after migrating from Mexico in spring. The actions of the first generation that flies north ensures the safe return of their great, great, great grand butterflies. Just like our future, and the future of our children and grandchildren, depends on our parents and grandparents’ generations acting now. Climate change is not about their prosperity, their convenience, or their ability to thrive. It is about our ability to survive. I wanted giant butterfly wings pumped full of kids’ passion to beat that message through the streets of Washington, DC.

It took the entire first week of March and a ton of markers to finish the outline of the butterfly wings. My arms were smeared with ink all the way to my elbow, and the idea seemed impossible to realize. The banner was so huge and dull. I thought there was no way I was going to get it done by the end of April. But I did!

As soon as we got it out there, we found plenty of kids that wanted to see those wings fill and fly. We took it to schools, clubs, churches, events, and even to the National Mall. In just a few weeks, over 1600 kids added their names and personal messages. Each one added a splash of color to the butterfly and the earth in the background creating a collective, vibrant appeal for a livable future.

The Promise for the Planet seems very like that butterfly, the one that sets off on a 3000-mile migration to secure the success of its descendants. It’s not just about me. It’s about those 1600 kids. It’s about us. Our generation doesn’t have the luxury to be complacent. Our future is at stake. That’s kind of scary, but the butterfly project taught me that everyone of us can do something. Whether it is small, everyday changes like carrying a reusable water bottle, picking up trash, or asking a restaurant not to give you a plastic straw, or bigger movements like Baltimore Beyond Plastic passing a city‐wide styrofoam ban. They are all important. They all matter. They make people think about the costs of convenience and prosperity and who will be forced to pay the price.

We have incredible opportunities this year to show the world that our generation is energized and committed to action. Zero Hour, a youth led climate movement, is organizing kids to flood the streets of Washington DC and cities around the globe on July 21st to demand action on climate change because we cannot wait any longer.

The butterfly effect amplified my project into an amazing, collaborative, international art initiative. Kids all around the world are expressing their commitment to a sustainable future by creating their own vibrant Parachutes for the Planet through the Mother Earth Project. Parachutes are arriving from Zambia, China, Lithuanian, Chile, the Marshall Islands... and all over the United States. These parachutes will be unfurled at the July 21, Youth Climate March in DC, and at venues worldwide to make sure we land safely in the future.

It sometime feels like all our generation can do is stand by, watch, and ask why? Why did it take decades to reach a global agreement on climate change? Why did we blow by 350 parts per million (ppm)? And then 400ppm without any real action? Why did our country pull out of the Paris Accord? Why doesn't our government act? Why don't adults seem to care?

Well, I am sick of asking questions. We know that our oceans are filled with plastic, fossil fuel combustion contributes to global warming, serve storms and flooding are happening more frequently, and our climate is changing. The “why” doesn’t matter anymore, but our future does. We have to be the Promise for the Planet. We might be its last hope before life as we know it changes forever, and I know we won’t give up easily. We will take action. We will march. We will beat our wings, and we will billow our parachutes aiming for a livable future.