This Week in the Watershed: Investing in Clean Water 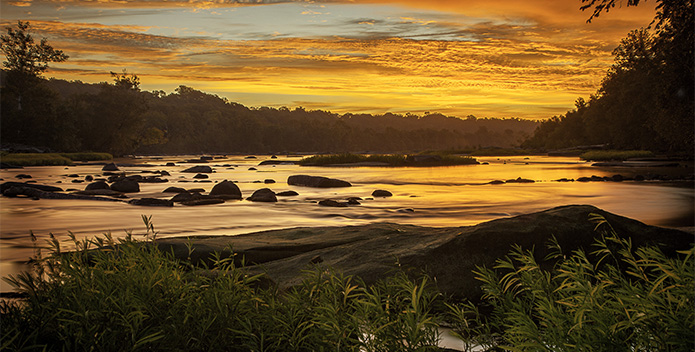 The sun rises over Richmond's Pony Pasture on the James River.

When Virginia's General Assembly adjourned in March, there was one item unresolved. There was deadlock on the state budget. But following a lengthy special session, it's clear there is something legislators all agree on: clean water.

Yesterday, Governor Northam signed a budget for the Commonwealth for the next two fiscal years, sent to him by the General Assembly, that includes critical investments for clean water programs. These programs include funding for Virginia's longstanding agricultural cost-share program which supports farm conservation practices that benefit the local economy and local streams. Legislators also funded the Stormwater Local Assistance Fund which helps cities and counties reduce polluted runoff, one of Virginia's biggest remaining challenges to clean water.

And perhaps the biggest win from this budget is that for the first time the General Assembly has invested in oyster restoration to build sanctuary reefs, while continuing support for oyster replenishment to boost harvests by hardworking watermen. This will increase the oyster population as the Chesapeake Oyster Alliance works to add 10 billion new oysters to the Bay by 2025.

This consensus on clean water was also reflected in yet another successful Clean the Bay Day, when thousands of volunteers, including dozens of legislators from both sides of the aisle, picked up more than 100,000 pounds of trash throughout the Old Dominion. Virginians, take a moment to thank your representatives and Governor Northam for their support for clean water.

This Week in the Watershed: Home-Grown Oysters, EIBs, and a Successful Cleaning