This Month on the Bay: Life in an Eelgrass Bed 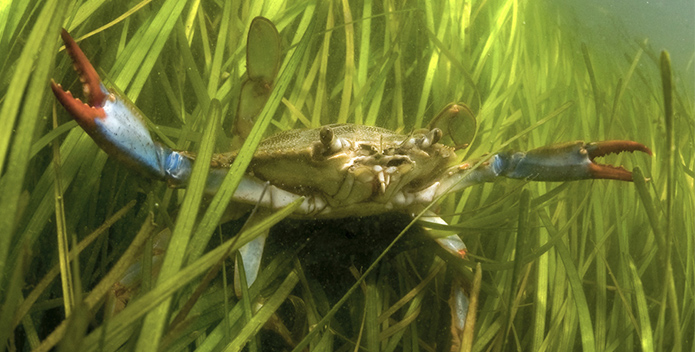 Underwater grasses are critical habitat for many Bay critters, including the blue crab.

Kenny Fletcher crouched like a great blue heron, extending his selfie stick and GoPro into an eelgrass bed. His quarry turned out to be a big jimmy crab, claws waving menacingly at the strange intrusion.

But the eelgrass held much more. It includes another jimmy carrying a female about to make her last molt and mate with him (0:35), plus a host of three-inch-long Atlantic silversides (0:52), among the Bay's most abundant forage fish.

Later, Kenny saw more as he sorted through an eelgrass clump from a crab scrape pulled by the CBF workboat Walter Ridder. Fascinated, he patiently collected its denizens in an aquarium tank. As Communications Coordinator in CBF's Virginia Office, he has his heart firmly fixed on (and in) the water. His catch included sea squirts, slipper shells, snails, barnacles, shrimplike amphipods, green isopods, hydroid colonies, small blue crabs, grass shrimp, a stickleback, more silversides, a juvenile black sea bass, and a male seahorse carrying young in his brood pouch. 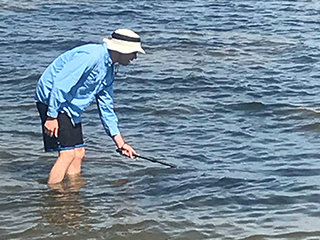 If oyster reefs are the Chesapeake's equivalents to corals, underwater grass beds are our rain forests. These are flowering plants with root systems, about fifteen species that grow around the Bay according to their salt tolerance. The lower Bay's backbone is eelgrass (Zostera marina), growing narrow green ribbons branching from sturdy rhizomes and roots.

Eelgrass grows all around the Northern Hemisphere, from the near-Arctic to our latitude. In the past century, it has weathered stress because of light-robbing cloudiness from water pollution and, in the 1930s, a fungal wasting disease. It has also suffered from hot summers, especially 2005 and 2010, but it has rebounded since.

This year's beds look encouraging. Bay scientists have expressed concern about warming water stressing our eelgrass, but as water quality improves because of the Chesapeake Clean Water Blueprint, clearer water appears to be helping balance out heat stress. Better yet, eelgrass meadows create an ecological feedback loop that helps clarify water even more. The waving fronds damp out wave action, causing fine sediment to settle around their roots.

That sediment provides an ideal environment for molting blue crabs, especially in the transition from megalops (second larval) stage to "first crab," when they finally resemble the animal we love. From that stage, eelgrass beds continue providing until the young crabs begin to travel elsewhere. 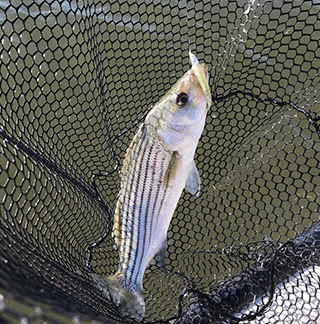 A young rockfish that mistook a soft plastic silverside minnow for the real thing rests briefly in a soft net before returning to his Tangier Sound eelgrass bed.

Meanwhile, all those tiny critters that Kenny found form a generous smorgasbord to feed them. No wonder the beds attract other predators: rockfish, speckled trout, and red drum cheerfully chowing down on the same smorgasbord. In fact, next morning, Kenny caught and gently released a two-year-old rockfish that mistook a plastic silverside for the real thing.

One last point about eelgrass: it puts down roots—literally. The seeds that grow from its flowers disperse the species, but the rhizomes and roots give the plants permanence, if water clarity and temperature allow them. As summer's heat increases, some fronds die, and commercial soft crabbers literally mow others with their smooth-bottomed scrapes, but the rhizomes and stems continue to put up more blades. Meanwhile, scraps of dead grass attract decay bacteria and fungi, creating a sort of vegetable stew with bacon bits to feed the worms, shrimp, amphipods, isopods, gastropods, barnacles, hydroids, sticklebacks, and silversides, so the grassbed's circle of life continues.

Rich as a rainforest? Hard to say definitively, but no wonder we call eelgrass meadows keystone communities for the Chesapeake!