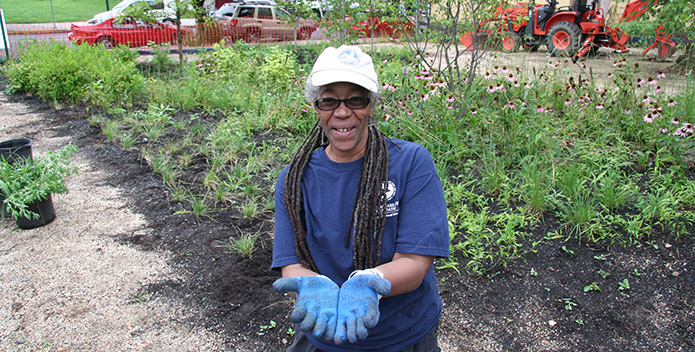 Garden mud, rain, and rocks were Rafiyqa Muhammad's playground growing up in a south-Harrisburg neighborhood.

Back then, she wanted to be a scientist. Her parents got her microscopes and tests tubes and instructions that encouraged her to mix things up.

Today and in that same neighborhood, Rafiyqa is still playing in the dirt, loves mixing things up, and enjoys learning about science.

Muhammad is the new rain garden maintenance specialist for the Pennsylvania office of the Chesapeake Bay Foundation (CBF), overseeing the Summit Terrace rain garden off North 13th Street in Harrisburg.

Funding for the rain garden at Summit Terrace and Rafiyqa's work is made possible by an Environmental Education Grant from the state Department of Environmental Protection (DEP) and matched by CBF.

The garden is among environmental justice projects that, through the grant, will empower and educate people in urban areas of Harrisburg, Lancaster, and York on how to improve and protect the water quality in their communities and beautify the areas.

DEP Secretary Patrick McDonnell defined environmental justice as "empowering low-income minority communities with better environmental information so they can more fully participate in the kinds of processes we at the department engage in every day; connecting people with their environment and their government to get better outcomes."

"The community over there always feels like everybody forgets them," Muhammad says of the Harrisburg neighborhoods around Summit Terrace. "We know they are there. But anything that is happening is not happening in their areas. As long as I'm at a table I'm going to push in those particular areas that we are not going to forget."

Capital Region Water (CRW) is a key partner in the Summit Terrace project as well as the renovation of four newly-dedicated playgrounds in the city. Three of the playgrounds have infrastructure like rain gardens, porous-paved basketball surfaces, and underground drainage to manage stormwater and flooding.

"Green infrastructure has the power to reduce pollution and beautify neighborhoods," Andrew Bliss, CRW's Community Outreach Manager said. "But only if driven by the neighborhood community itself."

Rafiyqa Muhammad is optimistic about the positive effects rain gardens can have on stormwater and society.

"Two blocks from where the rain gardens are, you have drug dealing and prostitution in the alleys," Muhammad said. "But the people are excited we are putting a garden in. They are going to be the people that protect the garden. They aren't going to let anything happen to it."

She plans to have children from the nearby Boys & Girls Club help with the rain garden. Muhammad is also helping the Camp Curtain Branch of YMCA install a rain garden and rain barrels. CBF is donating the barrels.

Urban and suburban polluted runoff is a leading source of stream pollution in Pennsylvania. Polluted runoff from impervious surfaces like roofs, streets, and parking lots finds its way into the nearest river or stream, threatening drinking water.

Rain gardens planted in low areas collect runoff water, allowing it to slow and soak into the ground and be absorbed by garden plants. Native plants lessen the need for water and fertilizer. As collection areas linked to stormwater structure, rain gardens help to manage stormwater and reduce flooding.

As a self-described "sponge" who learns by doing and experimenting, Muhammad is in the right role. She started the family aquaponics business Sustainable Human Environment (SHE) LLC, and a friend in Lancaster introduced her to permaculture. Permaculture is the harmonious integration of land and people, providing their food, energy, shelter and other needs in a sustainable way.

"I'm going to absorb everything and then process the information to see how I can get it out into the community in a way they can understand and be able to go home and try to implement it right away," Muhammad says. "Something woke up in me and was heavy on me that I needed to teach people how to grow food."

Muhammad still enjoys getting her hands in the dirt. Including plots at the Boys & Girls Club, William Penn school, YWCA, and her own backyard, she has worked between two and three city acres in raised beds and gardens.

"People think you can dig a hole, put a seed in and it's gonna grow," Muhammad said. "You need to look at the soil. Everybody calls soil ‘dirt.' I got people now saying ‘soil.' In dirt there is no life. In soil there is life."

Muhammad wants to get the neighborhood to appreciate the rain garden and to "Let them know that we're not going anywhere. We're still here, but this is your baby and take care of it, right down to the playgrounds. Just keep in clean. Aren't we tired how our city looks?"

Muhammad is no stranger to Harrisburg's environmental and social challenges. She sits on the city's Environmental Council. She was born on the same Harrisburg street where the CBF office is located and attended Lincoln Elementary.

"Sometimes we have to look at things and turn it into a positive," Muhammad added. "It hurts me to see the people in the condition they are in, but they have to make those changes," the grandmother of 40 and great-grandmother of 5 said. "I'm tired of what I see. I'm tired of the drugs. I'm tired of the killing. I'm just tired. This rain garden project to me is something different."