Quality Water, Soil, and Sales on the Menu at Field Day on Misty Mountain Farm 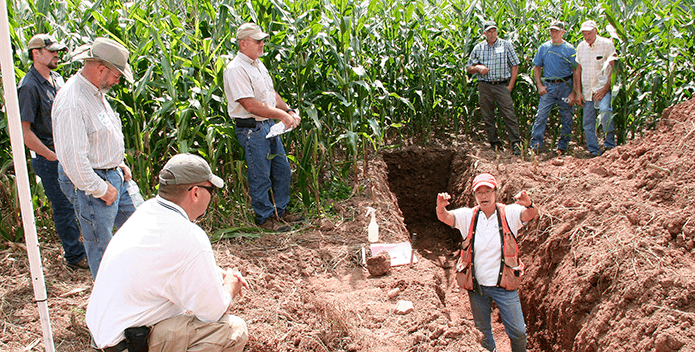 The beef brisket on restoration specialist Frank Rohrer's plate was two slices of succulent reward after a scorching summer day spent on a Lycoming County farm, and the product of quality water and soil that nurture the land.

After lunch, Misty Mountain Farm co-owner Dave Albert detailed family history and used a chalkboard to show guests that successful direct marketing stems from understanding the "who" and "why" of business. For the Alberts, success is selling tender beef you can cut with a spoon.

Earlier in the day, Yuri Plowden of the Natural Resources Conservation Service stood in a pit in a hillside cornfield and explained the virtues of un-tilled earth.

Co-hosts Dave and Holly Albert are sixth generation farmers and work 175 acres of owned and leased land near the town of Trout Run, about 100 miles north of Harrisburg. Murray Run is a headwater of Loyalsock Creek, the Susquehanna River, and the Chesapeake Bay. Middle Susquehanna Riverkeeper Carol Parenzan talked about water quality and mentioned that the Loyalsock is the 2018 Pennsylvania River of the Year. 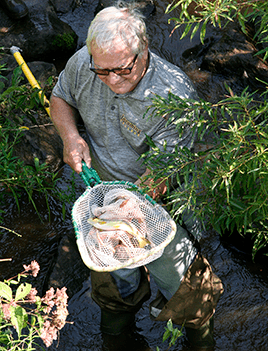 Dr. Mel Zimmerman shows a brown trout caught on Murray Run, a good indicator of improved health after the riparian forest buffer was planted and maintained.

During the day, Dr. Mel Zimmerman and a group of students and interns from Lycoming College's Clean Water Institute, made their way up the babbling west branch of Murray Run, electroshocking the water to raise signs of aquatic life that might reflect the health of the narrow creek. In moments, Dr. Zimmerman was holding a brown trout.

The riparian forest buffer that protects 1,400 feet of streambank along Murray Run has regenerated naturally. In 1999 it was one of the first buffers for Lycoming County.

The buffer was younger when Dr. Zimmerman assessed the stream eight years ago. The water was warmer and there were no trout. Earlier this summer they found three brook trout and water was almost two degrees cooler within the buffer area than outside of it. "Today we found a 10-inch brown trout," Dr. Zimmerman said of the survey on field day. "Trout are obviously moving up and utilizing this area."

David Albert, Dave's father, remembers catching only chubs there as a boy. "Now, the temperature has dropped and now, I'm gonna tell my grandchildren that, By Golly, there's gonna be fishin' up here," the older Albert said. 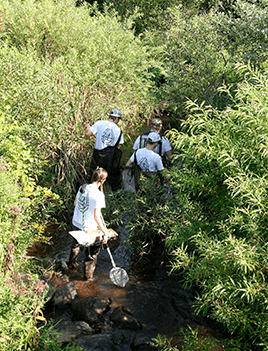 The riparian forest buffer that protects 1,400 feet of streambank along Murray Run has grown dense and healthy since its planting.

Trees in forest riparian buffers improve the quality of nearby waterways by filtering and reducing the amount of polluted runoff that enters them. Shade from the tree canopy also lowers water temperatures and creates better habitat for creatures that live in or near the water.

CBF is coordinating the statewide Keystone 10 Million Trees Partnership, with a goal of planting that many trees before the end of 2025.

The Alberts protected the stream further by adding a stabilized stream crossing and fencing cattle out of it. "The idea of fresh water to cattle, we see increased rates of gain on our calves," Dave Albert added. "The stream is extremely important to us in terms of rate of gain and overall health in the cow herd."

"They are continuing to take steps to move forward to better their operation and improve their conservation," Frank Rohrer said of the Alberts after leading a segment about the buffer. "The bottom line is to be more successful with their farm."

Elsewhere on the farm, the Alberts believe no-till and cover crop techniques improve soil and water quality, which leads success.

"All of our agricultural farmlands are no-till," Dave Alberts said. "We don't have near the fuel costs. No-till passes are simple. We basically have three days in our no till fields: a day to spray; a day to plant; and a day to harvest. Beyond that you have freed yourself up to do what you do best somewhere else."

From her post in the cornfield pit, Yuri Plowden explained to visitors that, "The key to soil health is, if your micro-organisms are doing all these things to create an ideal environment, you don't want to disrupt them. They are secreting substances that aggregate the soil. This creates pore spaces and as you increase this porosity you increase infiltration and reduce runoff. You also get good water and air exchange where a lot of your nutrients hang out. The other secret ingredient is live plant roots."

Dave McLaughlin told of how planting cover crops has worked for him. "In 2017 it was four years that I seeded cover crops and I've seen more changes in my soil in those four years, than the previous 16 years of straight no till," the Perry County farmer told visitors. "Erosion control was always a major issue."

Planting cover crops goes against the grain of thinking for some farmers. "It's a big hurdle," Dave Albert admitted. "Because what you believe is that you are putting a weed back onto your field that shouldn't be there. With cover crops you gotta believe that diversity is a good thing." 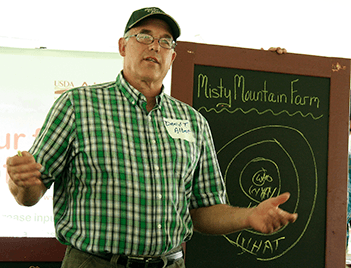 Direct marketing of Misty Mountain Farm beef gives the Alberts the highest return per acre from high plateau soils that have been in pasture production since the beginning of the farm in 1854. Their beef has earned a following in the local restaurant trade in Williamsport.

"Why you are doing it is the root to being successful," Dave Albert said. "They don't buy what you do, they buy why you do it. Our passion for and in the stewardship of family-owned and community neighboring land, livestock, and water sources speaks to our core beliefs. As powerful as ‘Why' is unto itself, combining it with ‘who' our target market is becomes the ultimate reason why we sell beef!"

In summing up the day, Lisa Feldt, CBF Vice President of Environmental Protection & Restoration said, "It speaks a thousand words when a farmer can engage with other farmers and tell them why something is good. The win-win situation is not only for the farmer, but for the environment, soil health, and water as well."

"It's pretty amazing that the Alberts invited everyone to the farm to share this and hopefully get some additional landowners to adopt some practices like these, and to keep spreading the word about what forest riparian buffers can do," added Adrienne Gemberling of the Chesapeake Conservancy.

"Today was about partnerships," Harry Campbell, CBF Executive Director in Pennsylvania said. "Individual landowners, conservationists, agriculture specialists, soil scientists, and others coming together to demonstrate how we can have clean and healthy soils, water, and food."

For more information about the Keystone 10 Million Trees Partnership go to www.TenMillionTrees.org.