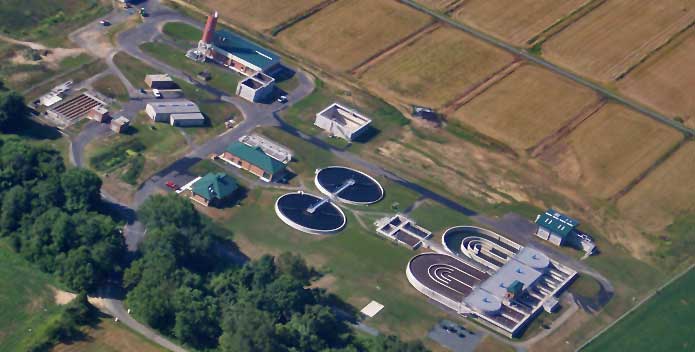 The Town of Easton and Easton Utilities received high honors from EPA for the excellent operation and Maintenance of Easton's wastewater treatment plant, which showed an 81 percent reduction in nitrogen discharge last year.

The following first appeared in the Bay Journal on September 26, 2018.

One goal: reduce their share of nutrients and sediment flowing into the Chesapeake Bay.

Such a task would be complicated for a government with a large roster of planners and engineers with millions of dollars at their disposal. But these six jurisdictions, scattered across Maryland's rural Eastern Shore, typically have to abide by the old preschool rhyme, "You get what you get, and you don't get upset."

How they're tackling the problem could be a model for other communities in the Chesapeake watershed and beyond that are facing battles cleaning up antiquated stormwater systems.

For the next three years, an environmental nonprofit's hired hand will lend expertise and manpower to each local government as it makes strides toward meeting a Baywide mandate to reduce stormwater pollution by 2025.

The effort draws inspiration from rural churches that share a "circuit rider" to lead their congregations, said Alan Girard, director of the Eastern Shore office of the Chesapeake Bay Foundation, the program's coordinator.

"It's a framework for how smaller communities can make progress," he said.

In April, the organization selected Tom Leigh, a former local Riverkeeper and Chesapeake Bay Trust program director, to be the circuit rider. He has spent the first few months meeting with officials in each jurisdiction to get a sense of what their priorities are, he said. The participating localities include Talbot and Queen Anne's counties, the cities of Cambridge and Salisbury and the towns of Easton and Oxford.

"Each of these jurisdictions don't have the financial capability to hire me or even six of me," Leigh said.

But they can afford one-sixth of him. Nearly half of the $660,000 program's cost is offset by a grant from the National Fish and Wildlife Foundation. Each community was left with a bill ranging from $6,000 to $37,000, depending on its size and need. 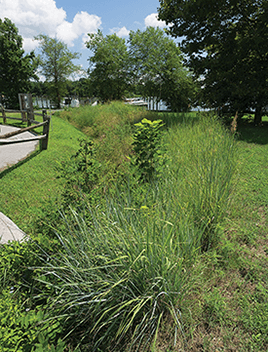 This swale near St. Michaels, Maryland, uses native greenery to slow and absorb stormwater runoff from an adjacent parking area.

The circuit rider program grew out of a list of Bay cleanup actions drawn up by Eastern Shore communities in collaboration with environmental advocacy groups and researchers in 2015.

Under a Chesapeake cleanup plan — enacted in 2010 by the U.S. Environmental Protection Agency and the states in the Bay drainage area — farms, cities and industrial sites must take steps to curb direct and indirect sources of pollution to the Bay. They face a 2025 deadline to put those actions in place. To get that work done, the Shore communities knew they would have to help each other.

Beginning this year, the stakes are getting higher in many of the jurisdictions. Under the state's municipal separate storm sewer system (MS4) permit, they will be required to treat runoff from 20 percent of their paved surfaces that were constructed prior to modern stormwater regulations. Queen Anne's and Cecil counties are challenging the Maryland Department of the Environment in circuit court, calling the requirements "impracticable."

If cities and counties don't do their part, the state can impose penalties — a potential lever to keep the overall restoration from falling behind schedule.

According to the EPA, urban and suburban stormwater accounts for 15 percent of the Bay's nitrogen, and it's a source of pollution that is still increasing. Common in lawn fertilizers, the nutrient is the main fuel for algae blooms in the Bay. The blooms block sunlight from reaching underwater grass meadows. When the algae die, they decompose in a process that creates fish-suffocating "dead zones."

Despite the litigation and a lack of financial resources, most of the communities involved in the circuit rider program have already begun implementing pollution-control strategies. But it hasn't been easy, they said.

To get a sense of the enormity of the challenge, meet Rob Gunter, Queen Anne's County's senior planner. He oversees development in a county whose population has swelled 80 percent since the first Chesapeake Bay restoration agreement was signed in 1983. There are swaths of corn and soybean fields on its mainland portion and densely paved islands jutting into the Bay.

The county has partnered with the environmental group ShoreRivers on stormwater projects on the campuses of Chesapeake College in Wye Mills and the Gunston School, a private high school in Centreville. Workers have planted trees, dug "bioretention areas" to filter runoff and restored streams to slow down stormwater on its path to the Bay.

Meanwhile, Gunter also is in charge of writing new building codes and development rules, conducting long-range planning, drafting forest conservation plans and whatever else might come his way.

"It's basically just me, and I'm sure others are in the same boat," he said.

There are. In 2009, the EPA funded two circuit rider demonstration projects: one in York County, PA, and one in Maryland and Virginia. Those efforts won wide praise for leveraging local government resources and producing more efficient results.

Eastern Shore communities can do the same, Leigh said. If more than one needs wood chips for a stream restoration project, they can band together to increase their buying power. They also can go in together to hire the same contractor to rehabilitate road ditches, saving more money.

"Everybody's got a ditch," he said. "Per mile of road, there's two miles of ditch. And that, per aggregate, is a significant lift [for improving water quality]."

In Talbot County, County Engineer Ray Clarke has been directing most of his energy toward transforming ditches into more streamlike water courses. It seemed like it would give the county the biggest environmental bang for its buck, he said.

"Unfortunately, we don't have a whole lot of land area, so if there was an opportunity to do something with our ditches, that would help a whole lot," he said.

No one, though, is tracking how many miles of ditch have been restored or what impact the work has had on water quality downstream. Clarke would like Leigh to help with that.

"Are we really meeting our target?" Clarke asked. "I don't know."

Girard said he doesn't expect all of the work that needs to be done to be finished at the end of the three years. Rather, the circuit rider should provide the impetus the communities need to meet their obligations for the Bay.

Local governments may have to pay for the work themselves or acquire grants to cover all or part of the costs. Girard said his group may raise money to keep projects going forward in year four and beyond.

Read a report about the 2009-10 Circuit Rider pilot program.