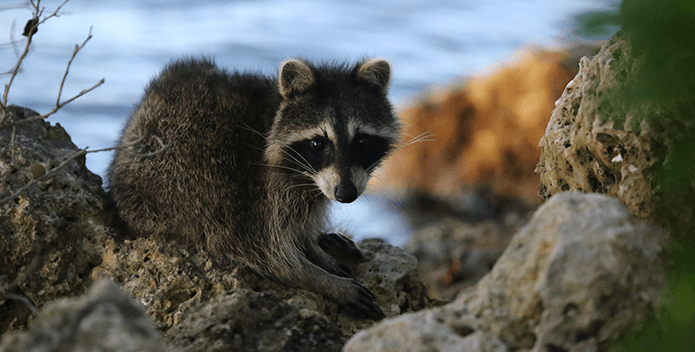 Raccoons were one of the many native North American wildlife that colonizers encountered.

The Chesapeake Bay region is steeped in Native American history. Many different tribes lived in the Chesapeake region, and their social, cultural, and political identities were extremely varied and complex. They spoke different languages, had distinct cultures, and organized themselves in a range of political structures and alliances. Today, there are tens of thousands of people in Maryland, Pennsylvania, Virginia, New York, West Virginia, and the District of Columbia who identify as American Indian.

Dive into some of the common terms around the Chesapeake Bay region that have local Native American roots:

The namesake for our Bay could stem from a variety of places. The word Chesepiooc is an Algonquian word referring to a village "at a big river." The name “Chesapeake” may refer to the Chesepian or Chesapeake people, a Native American tribe who inhabited the area surrounding what is now known as Hampton Roads, Virginia. While some believe "Chesapeake" means something like "great shellfish bay," Algonquian linguist Blair Rudes says it doesn't. Per Rudes, it more likely means something like "great water," or it may have referred to a village at the Bay's mouth.

Rappahannock is not only the name of one of the five largest tributaries to the Chesapeake Bay, but it's also the name of one of the eleven state-recognized Native American tribes in Virginia. The name comes from the Algonquian word, lappihanne (also recorded as toppehannock). "Rappahannock" contains elements that mean "back," "current of water," and "place." With those elements combined, the word spells out the "place where the water comes back" or a river moved by the tides, much like the Rappahannock River still is today.

Like the Rappahannock, the name for the largest river on the Delmarva Peninsula also was adapted from a local tribe. The Choptank people spoke Nanticoke, an Eastern Algonquian language closely related to Delaware. The name Choptank is thought to be from the Nanticoke word tshapetank, meaning "a stream that separates".

Pennsylvania's Susquehanna River provides nearly half of the freshwater entering the Bay. It also provides another example of the Bay's Native American ancestry. The name Susquehanna is derived from the Delaware Indian name “Sisa'we'had'hanna,” which translates to "river oyster". Long before Europeans arrived, Native Americans traversed the Susquehanna for trade, transport, and warfare.

The hickory tree gets its name from a food Virginian Algonquian speakers called pawcohiccora, which was made with pounded nuts and water. English speakers repurposed the name of the food for the tree itself, and dubbed it pokahickory, later shortened to hickory.

When English speakers came to the New World, they found many animals that they hadn't previously encountered in Europe, but they quickly adopted a variety of animal names. For example, raccoons are native to North America, and the name is borrowed directly from the Algonquian language.