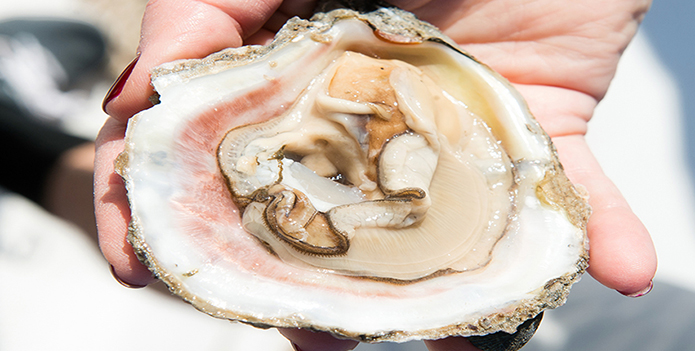 An oyster on the half shell.

Despite the widespread belief that the initial Thanksgiving took place in Plymouth, Massachusetts, many Virginians are quick to claim that first celebration occurred two years prior, in 1619, at Berkeley Plantation on the shores of the James River. While the celebration at Berkeley Plantation was not centered around a meal, we can only imagine the bounty the Bay could have provided participants, just a decade removed from Captain John Smith's first voyage up the Chesapeake.

One Bay staple that could have graced the first Thanksgiving table is the mighty oyster. Smith's journals tell the story of a Bay with so many oysters, they "lay as thick as stones." Oysters formed reefs so healthy and large that they later posed navigational hazards to ships sailing up and down the Chesapeake. And these oysters were as critical to the Bay's ecosystem then as they are today. Not only do they serve as filtering powerhouses, with a single adult oyster filtering up to 50 gallons of water each day, but oyster reefs form perfect habitat for other creatures like blue crabs and fish that make their home in the Bay. An excerpt from Smith's journal reveals the extent of the fisheries in the Bay on his first journey—

"[We found an] aboundance [sic] of fish, lying so thicke [sic] with their heads above the water, as for want of nets…neither better fish, more plenty, nor more variety for smal [sic] fish, had any of us ever seene [sic] in any place so swimming in the water."

Fast forward 400 years, and the Bay's native oyster population is a fraction of historical levels. Efforts to restore the oyster population are underway and shifted to another gear with the launch of the Chesapeake Oyster Alliance—a coalition of non-profits, community organizations, oyster growers, and others committed to adding 10 billion new oysters to the Bay by 2025. The revival of the Bay's oyster population will not only provide a bevy of ecological benefits, but also serve as an economic driver. 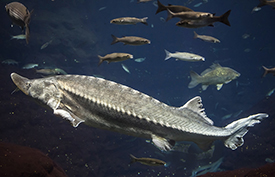 An Atlantic sturgeon, the Bay's largest and oldest native fish.

The oyster, however, was not the only Bay critter in abundance at the time of the first Thanksgiving. Returning to Smith's journals, he wrote that the Bay and its rivers contained more sturgeon  "than could be devoured by dog or man." The Bay's largest native fish, the sturgeon was here long before the first Thanksgiving. Dating back 120 million years, the Atlantic sturgeon once thrived in the waters in and around the Chesapeake Bay. But these dinosaurs of the Chesapeake were listed as endangered in 2012 after their population plummeted from poor water quality, habitat destruction, and overfishing. Like the oyster however, sturgeons are making a comeback. Recently, researchers at Virginia Commonwealth University found baby sturgeon in their trawling nets, providing hope that the fishery is recovering thanks to improving water quality.

Whether oysters, sturgeon, or countless other critters, the bounty of the Bay is a gift we should treasure and protect. Now at more than 18 million people living in the Bay watershed, the massive population surge over the past several centuries has unquestionably altered the water quality and habitat of these critters. But while the Bay will never return to its state when the first Thanksgiving occurred, we have the responsibility to steward this precious resource. With continued restoration efforts and implementation of the Chesapeake Clean Water Blueprint, we can ensure oysters, sturgeon, and others will thrive for generations to come.