This Month on the Bay: From Fall Colors to Dead Leaves 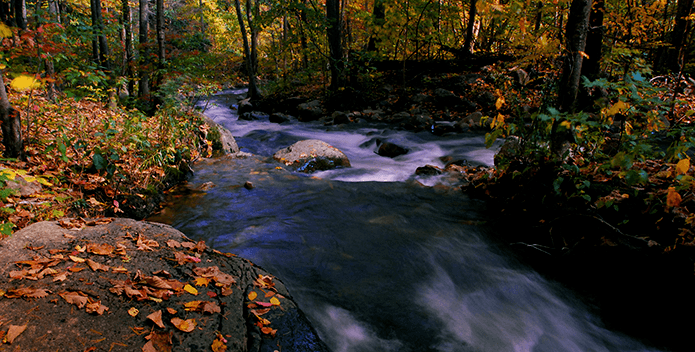 Leaf litter not only plays an important roll in the food web of land critters, but also stream critters as well.

The flora and fauna around the Bay are confused, and for good reason. It's been a strange year! By January 1, most of the Chesapeake watershed will have received sixty-plus inches of rain, about 150 per cent of what is normal here. Salinity in tidal Bay waterways is running from one-half to one-third of what is normal for Fall. It was unseasonably warm well into October and then suddenly turned cool. And all this wild weather has a lot of Bay critters puzzled about where to be and when to begin adjusting to the coming winter. 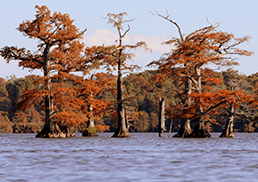 Bald cypress trees are the only deciduous conifer species native to the Chesapeake Bay watershed.

The same goes for plants, especially deciduous (leaf-shedding) trees, as they must adjust to abnormal moisture and sudden temperature change. Instead of late October, we finally began last week to see bright shades of yellow, orange, red, and purple from maples, sycamores, oaks, sweetgums, black gums, tulip poplars, ashes, and dogwoods on uplands as well as along bottomland rivers. Along Virginia's Chickahominy River and Dragon Run (the headwaters of the Piankatank),Maryland's Battle Creek (a Patuxent tributary) and Pocomoke River, and Delaware's Trap Pond (headwaters of the Nanticoke River), the soft, russet heather hues from bald cypress trees are finally showing. These form the only deciduous conifer species native here, and their waters are particularly lovely places to explore at this season by canoe or kayak.

But heavy rain this week may well dull the fall colors, and the changes in temperature may well force trees to close off branches and drop their leaves under the force of downpours. It looks as if we'll have to chalk up this fall to more strange weather.

So, what's the value for deciduous trees in dropping their leaves, and why the striking color changes in the process? In hunting around for answers, we came across this remarkable story from the Great Smoky Mountains, that explains the ecological value of the process.

You might not often focus on green chlorophyll, orange beta carotene, yellow xanthophyll, and red anthocyanin, but these fallen leaves play a vital role in the ecosystem.

Even though the fallen leaves are now dried up because their trees have reabsorbed their chlorophyll and most of their body fluids, there are still calories and proteins left in the husks for fungi, bacteria, and certain insect larvae to feed on. As they accumulate around their trees, the leaf litter turns into the thick "duff" that we feel under our feet on winter walks, and gradually the materials become part of the Chesapeake watershed's deep, thick, rain-absorbing woodland soils. Over the millennia before we got here, those woodlands developed food webs that made use of everything, cycling materials and sunlight energy originally captured by the leaves' chlorophyll through multiple food web layers, ranging from microbes to large birds and mammals (eventually including humans).

But what about the leaves and leaf fragments that rains wash from the forest floors into adjacent headwater streams? Is there a valuable role for the dead leaves of Fall and Winter in our streams, creeks, rivers, and Bay? Unsurprisingly, nature leaves nothing to waste, as several critters rely on the annual dropping of leaves. The leaf-eating stream community includes members with colorfully descriptive names like shredders of dead leaves (e.g., caddisfly larvae), collectors of fine organic particles (e.g., blackfly larvae), filter feeders of particles suspended in the water column (e.g., mussels), and scrapers (e.g., tiny snails) of diatoms (specialized algae) that live on the stream bottom.

Our Bay's ecosystem developed with mature forests, and it needs them back, dead leaves and all. Which is why CBF is placing a lot of emphasis on planting trees, especially in Pennsylvania but also in Western Maryland, the West Virginia Panhandle, and Virginia's Shenandoah Valley. Join us in advocating for forest conservation measures and sign up for CBF tree plantings in the spring.