The Love Lives of Chesapeake Critters 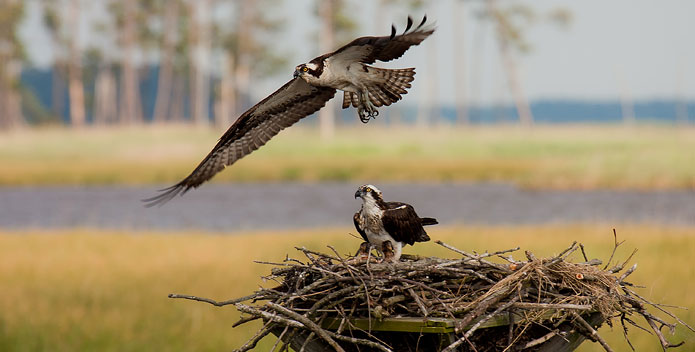 In honor of Valentine's Day, we took a look at some of the very weird mating habits of quintessential Bay critters!

In honor of Saint Valentine, we thought we'd take a look at love in the oldest, most talked-about form of interaction right here in our own backyard—the Chesapeake Bay. With more than 3,000 species of wildlife in the watershed, there are some really weird mating habits out there! Here are some of our favorites (reader discretion is advised!):

I Like the Way You Move
The Chesapeake Bay's iconic blue crab uses quite an elaborate dance to attract its mate. Standing tall on his tippy toes, a mature male will extend and wave his claws rhythmically toward the female and as author William Warner describes in his famous Beautiful Swimmers: "Finally, to make sure he is not ignored, he snaps his body backward and kicks up a storm of sand with both swimming and walking legs. It is a spectacular finish. If all this fails to convince, the Jimmy will patiently repeat his repertoire, as most courting animals commonly do." Generally, the on-the-cusp-of-molting females get the idea pretty quickly and respond with reciprocated claw waves. Soon she tucks her claws into a submissive posture and allows the male to clasp and carry her thus becoming a "doubler." This position not only allows for mating but also ensures the male's protection of the female as she vulnerably molts and sheds her shell.

Mr. Mom
In the unusual case of the pipefish, most of the parenting duties fall to the father. In late spring/early summer, the female lays her eggs into the male's brood pouch, where they are fertilized. For roughly two weeks, the male will hang vertically, camouflaged by underwater grasses, as he incubates the eggs until they hatch. He then releases a cloud of tiny, fully-formed pipefish directly from his pouch into the water.

One Last Hurrah
Alas, after spawning in mid-summer, jellyfish, in pure Shakespearean tragedy, feel they have nothing left to live for and promptly die. But before that sorry state, a female's eggs are fertilized when a male releases sperm into the water, which is then pumped through the female's body as she swims. Once fertilized, eggs develop into tiny, free-floating larvae which the female then releases into the water where they float with the current and then attach to a firm surface. They will remain there as dormant polyps through winter until warmer weather induces them to break free and develop into floating medusa and eventual mature adults.

The Best of Both Worlds
Oysters have the unique ability to change sex over the course of their lives (really?!). In fact, most oysters less than a year old are male, while most older oysters are female. Adults release sperm and eggs (a female can release about 100 million eggs each year!) into the water. Within 24 hours, the sperm finds and fertilizes the egg and then develops into free-swimming larvae. After two to three weeks, oyster larvae grow a foot, which is used to crawl over and explore various surfaces before settling down and attaching to a hard surface.

"My One and Only"
Finally, ospreys are perhaps the most romantic creatures in the Chesapeake, mating for life and returning each year (often traveling thousands of miles) to nest in the same area where they were born to be reunited with their one and only. As true with many relationships, ospreys develop a strong partnership as they build their “home” or nest together in late winter. As they continue to play house, females lay eggs, which they incubate for one to two months. The devoted parents stick together and feed and care for the nestlings for 40-55 days after hatching until they learn to fly. Very soon these osprey will begin their migration north for the spring and summer, many settling into nests in the Chesapeake Bay region—what's often called the "osprey garden" as it has the most concentrated population of osprey in the world. We can't wait to see these lovebirds again.

To ensure that these Bay critters will continue to procreate and engage in the aforementioned scandalous activities, please take a moment now to join us in our clean water efforts!