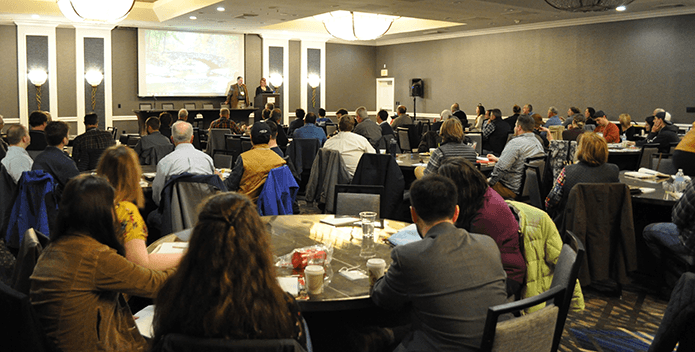 Alison Colden and Don Webser speak to a full room at the Maryland Shellfish Aquaculture Conference in February 2019.

Since 2012, oyster farmers in the state have increased their overall harvest by more than 1,000 percent. In 2018, the growing industry harvested more than 80,000 bushels, the most ever recorded in the state.

As the industry continues to expand, it's facing pressure to find new markets to sell oysters to as well as regulatory changes that could impact its growth.

On Feb. 12, more than 80 oyster farmers, seafood sellers, and marine scientists gathered for the Maryland Shellfish Aquaculture Conference at the Crowne Plaza in Annapolis to discuss the latest science, marketing efforts, and challenges surrounding the industry. The tone in the room was optimistic as attendees peppered presenters with questions and added their thoughts to discussions about the future of oyster farming.

The event was hosted by the Maryland Shellfish Grower Network, a partnership between the Chesapeake Bay Foundation, University of Maryland Extension, and Maryland Sea Grant.

The conference began with a discussion of regulatory developments that included information about obtaining leases to set up an oyster farm in the Chesapeake Bay. Oyster farmers plant and tend their oysters on leases of Bay bottom permitted by the state. The leasing process was simplified with several changes in state regulations in 2010, a change that was identified by several growers as an important catalyst for their businesses. However, Bob Rheault, executive director of the East Coast Shellfish Growers Association, explained that newcomers to the industry still find it difficult to obtain a lease.

"It took me two years to get my first lease," Rheault said. "If you're not stubborn and persistent, you're probably not cut out to be an oyster farmer."

"The most important part is to build a great oyster," Sughrue said. "Grow the best oyster you possibly can." He said rotating oysters in a tumbler or using the tide to do so seems to produce an oyster with a deep cup and hard shell that restaurants desire.

"Nothing gets a restaurateur angrier faster than when they shuck oysters and the shell cracks and they have to throw it away," Sughrue said.

Salmon warned farmers not to rush oysters to market. "We want a good, consistent product," Salmon said. "Make sure the oysters are mature and they fill out their shell."

He told the farmers to be transparent about their growing practices and that he values growers who make their businesses more environmentally sustainable. He cited one oyster farm that uses biofuel for their work vehicles as an example.

Stan Allen, director of the aquaculture genetics and breeding technology center at the Virginia Institute of Marine Science, compared the current science behind the selective breeding of oysters with the early days of breeding corn. Back then, ears of corn were so small they resembled the seed tips of grass. Over thousands of years, humans bred corn to be the size and quality people are familiar with today.

The idea behind the comparison—selective breeding of Bay oysters has a long way to go to make them grow faster, tastier, and more disease resistant. His lab provides much of the brood stock that is used to produce spat on shell at hatcheries, which later sell the baby oysters to oyster farmers who plant them on their leases.

A panel of oyster farmers emphasized the regenerative ability of the industry. Just like wild oysters, farmed oysters improve water clarity over time due to their natural filtering ability. The growers mentioned that some waterfront property owners don't like seeing oyster farmers working leases in water behind their homes, despite the ecological benefit of the bivalves.

"We've got to make this more of a romantic thing," Brian Russell, of ShoreThing Shellfish, said. "We need to let them know about the environmental benefits. We're not just sustainable, we're regenerative… This is restoration on the private dollar, not the taxpayer dollar."

The conference concluded with a discussion about how to improve oyster farming through partnerships with nonprofits such as the Chesapeake Bay Foundation (CBF), Maryland Farm Bureau, and the Coastal Conservation Association. The panelists, including CBF's Maryland Fisheries Scientist Allison Colden, encouraged members of the industry to seek assistance to help them get an oyster farm started or if they are struggling to understand government regulations.

Rheault, of the East Coast Shellfish Growers Association, encouraged growers to get involved in advocacy through the growers association. He noted that the association advocates for local, state, and federal policies that help promote oyster farms' profits and growth.

"I think the event provided a lot of useful information and hopefully will help oyster growers better their businesses," said Colden, who organized the event. "CBF and shellfish growers have a lot to gain by working together. Clean water is critical to successful oyster farms and to our central mission to Save the Bay."