8 Rock Songs You Didn’t Realize Were about the Environment 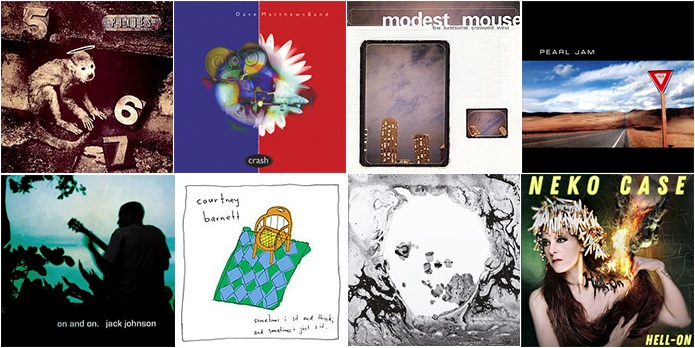 For many political historians, April 1970 marks the beginning of the modern environmental movement in America. Earth Day, the brainchild of Senator Gaylord Nelson, has been a worldwide celebration of nature and conservation every year since.

But music historians could also argue that April 1970 also marks the birth of the modern environmental rock anthem. That same month, an emerging Canadian singer-songwriter released a simple song about "paving paradise to put up a parking lot."

To this day, "Big Yellow Taxi" is Joni Mitchell's most well-known song. Not only was a tremendous hit in 1970, but it also brought environmental concerns to the popular radio waves. Mitchell blazed a trail for other rock artists, and in the months that followed, dozens of popular songs explicitly tackled themes of pollution and environmental destruction.

Just one year later on "Mercy Mercy Me (The Ecology)," Marvin Gaye silky smooth voice warned of the impact of pollution on birds and fish. And the Beach Boys didn't mince words on their 1971 track "Don't Go In The Water" when they sang, in their trademark six-part harmony, "Don't you think it's sad what's happened to the water?" There's no question that the early 1970s was a golden age of conservation choruses (The Kinks' "Apeman" and The Doors' "Ship of Fools" are two personal favs).

To the untrained ear, it may sound as though rock artists' priorities have shift. But you're simply not listening close enough. To prove the point, here are 8 killer rock songs—all released in the last 20 years—that you probably didn't realize were also environmental anthems.

Using apocalyptic imagery, The Pixies sing about the shrinking ozone ("now there's a hole in the sky and the ground's not cold") and water pollution in the form of "ten million pounds of sludge from New York and New Jersey." Fortunately, since the Pixies released the song, the cities have taken huge strides to limit sewer system discharge thanks to better rules and regulations.

Dave Matthew's Band 1996 smash album "Crash" featured not one, but two environmental anthems. The better-known "Too Much" was overtly critical of consumerism and unchecked capitalism with straight-forward lyrics like "I eat too much / I drink too much / I want too much."

But on "Proudest Monkey," Matthews is much subtler. He questions whether it was worth it when those early humans ("proud monkeys") "climbed out of these safe limbs" and traded a peaceful life in nature for a life in the city with "car horns, corners and the gritty."

In their 2004 massive hit "Float On", Modest Mouse's Isaac Brock sang, "Don't you worry, we'll all float on, alright." But seven years earlier, he was much less laissez faire. Like Joni Mitchell, Brock laments the environmental impact of suburban sprawl, in particular the huge expansion of parking lots and highways. I suspect that Brock knew that when we turn forests and farms into residential and commercial areas without careful planning, we add to the amount of pollution that ends up in our rivers and streams.

Pearl Jam has no shortage of socially conscious rock anthems. On this high-energy romper, Eddie Vedder is satirizing the belief that because humans are "the first mammal[s] to wear pants" we can simply bend the land to our will ("All the rolling hills / I'll flatten ‘em out"). Often when we do that, we convert beautiful landscapes to impervious surfaces, which increases polluted runoff, one of the most harmful sources of pollution to the Chesapeake Bay.

Jack Johnson—Horizon Has Been Defeated (2010)

I can't tell you how many times I sang these lyrics before it dawned on me that Jack Johnson was warning us that if we're not careful and thoughtful about suburban growth and transportation, we'll need more oil. In that scenario, "the drilling goes too far" and "the horizon begins to fade." Johnson's lyrics remain timely, as the President considers expanding offshore drilling in the Atlantic Ocean, a move that CBF believes does not make economic or environmental sense.

Courtney Barnett's breakout 2015 album "Sometime I Sit and Think, and Sometimes I Just Sit" features some of the best songwriting of the last 10 years. On "Dead Fox," she begins by questioning whether local, organic produce is actually worth the extra cost (CBF thinks so!). But later, after seeing roadkill ("a possum Jackson Polluck") and a tractor trailer rushing produce to market, she begins to question whether she's complicit in the loss of the natural world. Her conclusion? "More people die on the road than they do in the ocean / Maybe we should mull over culling cars instead of sharks."

Radiohead's Thom Yorke initially titled this song "Silent Spring," presumably after Rachel Carson's seminal environmental work. In his signature falsetto, Yorke delivers a haunting yet beautiful reminder that "we are of the earth / to her we do return." And, despite the enormous challenges that climate change poses, Yorke encourages us to "take back what is ours / one day at a time."

While singer-songwriter Neko Case was touring in England, she saw lions everywhere—on British coins, historical buildings, and royal crests. Then, suddenly hit her. The lions of England have been extinct for centuries!

"Anything beautiful that's used as a national symbol is something that's often been destroyed," Case said in a Song Exploder interview. Rather than simply wonder what the last lion of Albion (an old name for Great Britain) must have been thinking, she wrote a song about it. The result is a powerful song that reminds the listener we must take care of all living things.